At least 30 Iranians and two Bangladeshi citizens were aboard the tanker when the collision occurred. 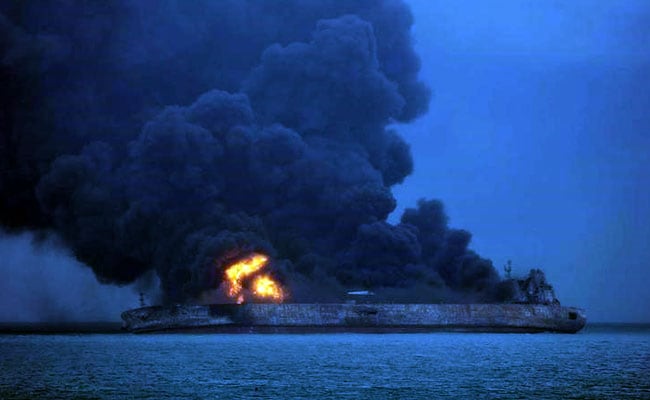 Three days after it collided with another ship off the coast of Shanghai, the tanker Sanchi is on fire and leaking oil into the East China Sea.

And experts fear that is not even the worst-case scenario.

At least 30 Iranians and two Bangladeshi citizens were aboard the tanker when the collision occurred. One body has been recovered but not publicly identified. Rescue crews said there were no signs of survivors.

Since the crash, the Sanchi has been billowing thick plumes of black smoke into the air. Unless the fire can be brought under control, officials worry that the ship might explode and sink, releasing its 1 million barrels of oil into the water.

The resulting spill would be about three times as big as the Exxon Valdez spill of 1989, one of the worst environmental disasters in history. It would double what the Prestige oil tanker released when it sank off the coast of Spain in 2002. That accident damaged beaches in France, Spain and Portugal, and led to the closure of one of Spain's richest fishing areas.

(Some of the worst spills in history have been even bigger. When the Deepwater Horizon drilling rig exploded off the southern coast of the United States in 2010, it spilled about 210 million gallons of oil into the Gulf of Mexico. In 1979, the Atlantic Empress and the Aegean Captain collided, resulting in a 90-million-gallon oil spill. A 1991 explosion aboard the tanker ABT Summer off the coast of Angola spilled about 80 million gallons.)

The Sanchi was transporting oil from Iran to South Korea on Saturday when it ran into the CF Crystal, a Hong Kong-registered ship carrying grain from the United States. The crash occurred about 160 miles off the coast of Shanghai and near the mouth of the Yangtze River. The cause remains unknown.

Experts are especially worried because the ship is carrying condensate, an ultralight version of crude oil. Condensate is highly toxic and even more combustible than regular crude oil. It also is nearly colorless and odorless, which makes it difficult to detect.

"This stuff actually kills the microbes that break the oil down," Simon Boxall of the National Oceanography Center at the University of Southampton told the BBC. "If she sinks with a lot of cargo intact, then you have a time bomb on the sea bed which will slowly release the condensate."

An oil leak into the East China Sea could also have a serious effect on the waterfront's wildlife.

If the ship does not sink, the environmental impact would be much more limited. Much of the oil - between 40 percent and 70 percent - would probably evaporate in hours. Of course, if those fumes drift toward towns and cities, they could aggravate existing health conditions or lead to coughing and asthma.

An international effort has been launched to try to stem the worst effects of the accident. But rescue and cleanup efforts are being hampered by bad weather, along with thick smoke and toxic fumes wafting from the ship. "The poisonous gas . . . is very harmful to rescue workers in the field," according to a statement from the Shanghai Maritime Bureau.

"The environment and the conditions on the ground are not very favorable for search-and-rescue work, and some crew members are still missing," said Lu Kang, a spokesman for China's Foreign Ministry.

Promoted
Listen to the latest songs, only on JioSaavn.com
The accident occurred in an area known as the "new Bermuda triangle" because it is so dangerous. At least 33 ships were lost in the area in 2016, according to Die Welt.