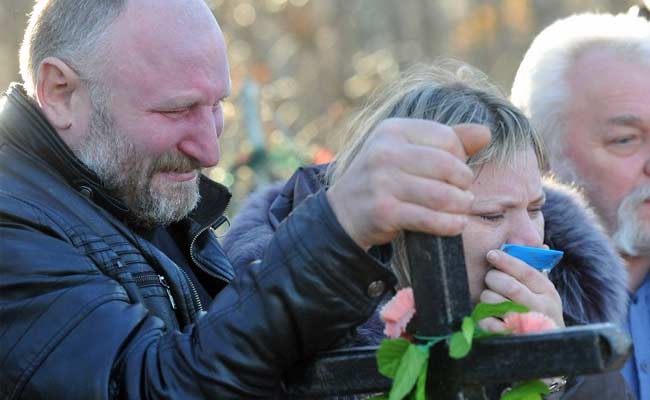 Relatives cry at the grave of Nina Lushchenko, a victim of the Russian MetroJet Airbus A321 crash, during her funeral at a cemetery in the village of Sitnya in Russia's Novgorod region. (AFP photo)

Moscow: Some 11,000 Russian tourists have returned home from Egypt in the past 24 hours after Moscow suspended flights to the country over the Sinai plane crash, an official said today.

"Over the past 24 hours some 11,000 people have been flown out," deputy prime minister Arkady Dvorkovich told reporters, adding that more people were set to return home later in the day.

"Today is the busiest day in this sense," he said at the Vnukovo airport outside Moscow.

He added that Russia was sending a number of experts to inspect Egypt's airports to see if security needed to be beefed up there.

While it dismissed international suspicions that the Russian jet that crashed on October 31 over the Sinai peninsula with 224 people on board was bombed, Russia halted all flights to Egypt on Friday.

Officials had said on Saturday that nearly 80,000 Russian tourists were still in Egypt, mainly in Sharm el-Sheikh and Hurghada, and that they would be able to return home at their own pace.

Following in Britain's footsteps, Russia said tourists returning home would fly without their check-in luggage which will be brought back to the country separately.

Earlier Sunday an Il-76 plane of the Russian emergencies ministry departed Hurghada with some 30 tonnes of tourists' baggage.

The ministry added that the first Il-76 plane had already brought another 30 tonnes of luggage to Moscow.

The Kremlin insisted the decision to suspend flights did not mean that Moscow believed the crash was caused by a deliberate attack.

Russia's Interstate Aviation Committee said on Saturday that its experts were continuing their work at the crash site together with representatives of Egypt, France, Germany and Ireland.