The UK election of 2017 ended in a hung parliament after the ruling-Conservative Party of Prime Minister Theresa May failed to retain its majority. While the Tories won a total of 318 constituencies, eight short of majority, the Labour Party under Jeremy Corbyn gained 261 seats - an improvement of 29 seats from the 2015 elections. The smaller parties - Liberal Democrats and Democratic Unionist Party - won 12 and 10 seats respectively. In Scotland, Nicola Sturgeon's Scottish National Party - which won all but three seats in the 2015 election - lost much of its base to the Scottish Conservatives, led by Ruth Davidson.

The snap election of 2017 was called by Theresa May, who took office after Britain voted to leave the European Union in 2016, at a time when UK faces uncertainty over its future. The election was fought on the tough issues of economic and political stability, one-nation unity and terrorism. Despite losing her majority, British Prime Minister Theresa May has staked claim to 10, Downing Street with the support of the Belfast-based DUP.

NDTV's Dr Prannoy Roy, Dorab Sopariwala and other guests examine the results of the UK election as well as the winners and losers.

Dr Prannoy Roy: In the British Elections, the Labour leader is the new hero. And Theresa May, the Conservative Prime Minister, is in tatters.

This despite the Conservatives winning 319 seats - 58 more than Labour's 261.

The election's seemingly bizarre impact on the two leaders once again shows how in politics - as in life - it's not reality that is measured. What matters is reality compared with expectations.

Before these elections, the expectations were that Corbyn would lose 100 to 150 seats. In the end he lost by only - well actually a quite substantial - 58. Ironically, Corbyn benefited by losing by 58 rather than 100. And May lost out because she won - won by only 58 and not by 100 or 150 seats.

PM Theresa May's Conservatives won, but failed to get majority 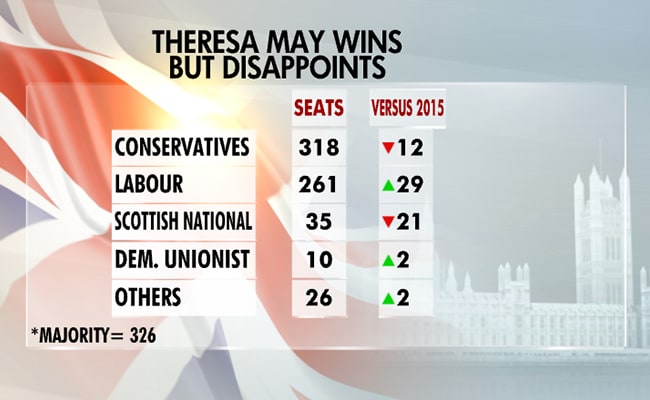 Mark Tully, Senior Journalist: We journalists should hide in shame. We have done our best to crucify Corbyn and Corbyn has shown us the door.

Theresa May ran an arrogant campaign.

Douglas Busvine, Reuters' New Delhi Bureau Chief: Perhaps British people felt a too strong verdict for May would have made the Brexit mess even worse.

Perhaps people wanted a weak government - not give May too free a reign.

Constantino Xavier, Carnegie India Associate: It's less of a question of Left or Right but more a question of populism. Corbyn focused on the right agendas for the key demographic. 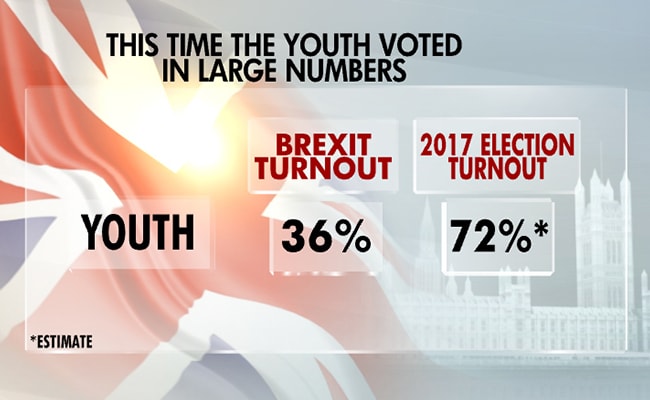 Douglas Busvine: Corbyn's tapped into the dissatisfaction of the young voters. 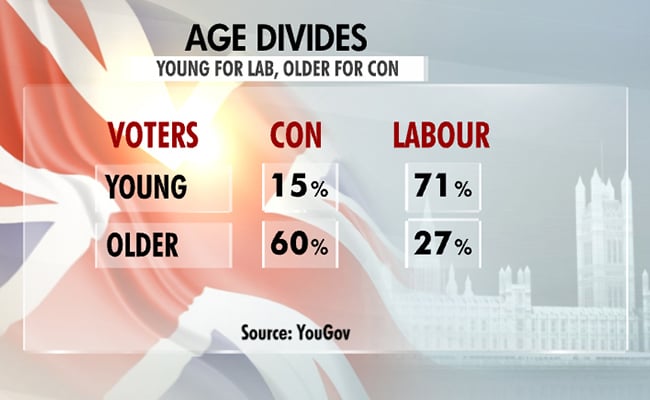 Fact is he did just a little bit better than how disastrous Ed Miliband was.

Sam Miller adds: I remember campaigns like this from the 70s. He's bringing very old methods of campaigning very successfully. But he's done better than the last election, worse than the one before.

The Age vs Class Factor 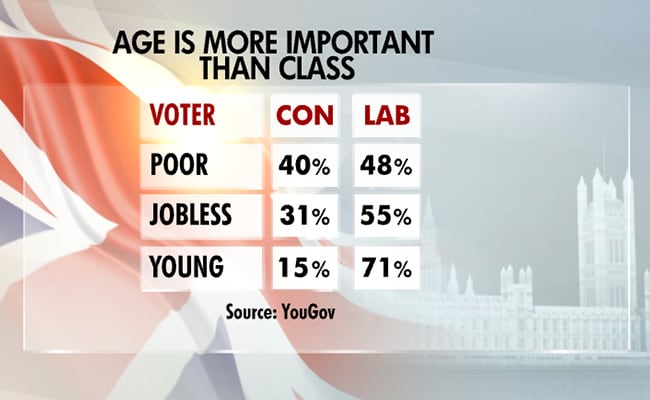 In Brexit vote, the young did not turn out in huge numbers

Kiran Stacey: The Brexit, the wages - if Labour can't win under these circumstances, one wonders what one needs to do for Labour to win.

Stewart Martin Wood, UK Labour Party: Jeremy Corbyn's platform was socialist. He did get more people to vote for Labour than before.

What really is extraordinary is the collapse of the UKIP. 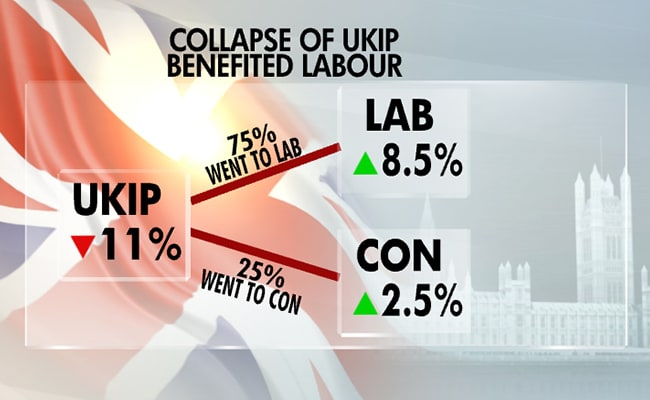 Stewart Martin Wood: UKIP voters historically are working class Labour voters who had begun to resent the party. They have now returned - on the collapse of UKIP.

Constantino Xavier: May lost out due to her wishy-washy messaging. Labour gained because of the clarity of their message.

Mark Tully: There was a bit of regret (over Brexit). What is a tragedy is that Jeremy Corbyn didn't show his campaigning skills during the referendum. We would have had a different result.

Lord Meghnad Desai, Economist and Labour politician: What is very surprising is that the Labour manifesto wasn't very Left wing.

Jeremy Corbyn didn't campaign hard during the referendum because he doesn't believe in the EU. This time he believed in the cause.

He (Corbyn) is straightforward, people like his total honesty. It is the person as well as the politics.

Kiran Stacey: There is something about Jeremy Corbyn's refusal to change anything that appealed to some people. And he ran a very good campaign.

Sam Miller: May moved around, she changed her policy. I think that was deeply damaging for the party. Her humiliation is the story, not the slightly better performance of Corbyn.

Corbyn is not any closer to power than he was before. There could be a general election again this year and he could do better.

Stewart Martin Wood: Hard Brexit is dead now. The parliament is unlikely to get together to pass an extreme move now, after yesterday.

I personally think there will be a second election this year. The Conservatives smell blood. They will have a new election.

Mark Tully: I think it's perfectly possible for another election to happen. And if Labour and Corbyn behave, he could be the next PM.

2 Crore Plus Vaccinations Today, But What About Tomorrow?