Another "Misuse" Of Maggi Goes Viral As Pastry Noodles

A video doing the rounds of social media showcases Maggi made with a pastry, titled Pastry Maggi. 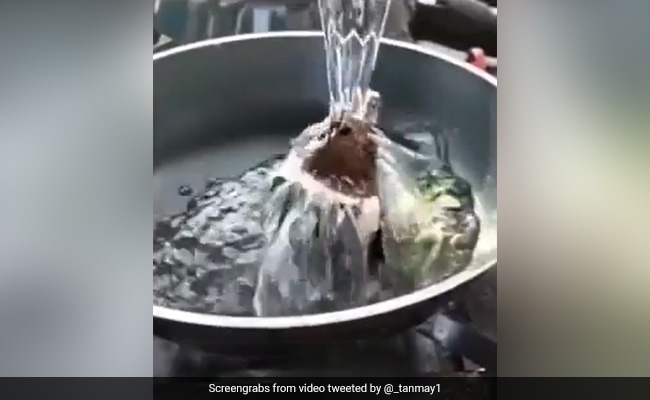 Internet users are quick to innovate with different dishes, and no food has seen variations the way Maggi has. People have experimented by coming up with different versions of instant noodles, but now the trend seems to have gone too far. A video doing the rounds of social media showcases Maggi made with a pastry, titled Pastry Maggi.

In the video a slice of a chocolate pastry can be seen added to fried onions and chilies in a frying pan, which is then mashed together with water. Once this mixture comes to boil, a block of everyone's favourite 2-minute noodles gets added along with its signature flavour pack. The video then shows the cooked Maggi being served into a bowl with a seemingly thick brown chocolate curry.

The video has left social media reeling with many showing their dissatisfaction with the invention, with comments ranging from “Kya ho gaya hai is duniya ko” to people responding with puke emojis.

Another video shared on social media had a user experimenting with ‘Mango Maggi'.

It shows a woman cooking Maggi noodles normally, by adding magic masala and water in a frying pan. But a short while later, she pours Slice (a mango drink brand) to it, and fresh slices of mango before serving it hot in a plate.

Maggi is a popular multinational brand of seasonings, instant soups, and noodles that began in Switzerland in the late 1800s. Nestlé purchased it in 1947.