Student from Burundi in coma: Superintendent of Police's son arrested 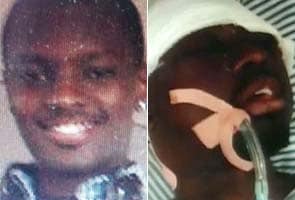 Yannick before his attack. And Now in hospital.

Jalandhar: The Jalandhar Police has made a fresh arrest in connection with the assault on Yannick Nihangaza, a student from Burundi. Romi Uppal is the son of a Superintendent of Police, and was arrested after his name figured in the call details of the main accused who beat Yannick nearly three months ago, sources said.

According to police sources, Romi was arrested after questioning; further investigation is on, with more arrests likely. Two people were arrested yesterday in connection with the case.

23-year-old Yannick was walking to a party in Jalandhar on April 22 when he was stoned, severely beaten and left on the roadside. Strangers took him to hospital. Yannick was enrolled as a student of B.Sc. Computers, First Year, at the Lovely Professional University.

Yesterday, the Punjab government announced assistance of Rs 5 lakh for Yannick and promised stern action against all those involved in the incident. Punjab Chief Minister Parkash Singh Badal said that the student "will get justice at all cost...whosoever is behind the crime will be dealt with sternly", a day after Nestor Ntibateganya, Yannick's father, claimed that he had not received any response to the two letters he wrote asking the chief minister to intervene in the matter.

Promoted
Listen to the latest songs, only on JioSaavn.com
"We are prepared to provide all possible help to the student...the government will not hesitate in taking action even if the persons involved in the crime are influential ones," Mr Badal said, adding he did not know about the incident earlier. "But now it is in my knowledge, he will get justice."

On June 25, Yannick's father wrote to the Chief Minister of Punjab, describing the condition of his son, who lies in a coma in a hospital in Patiala. "I am writing to you as a father writing to another father, someone who has known and experienced love of a child," the man from Burundi wrote. "In a country that I believe to be a civilized one, and where the laws of this land should be respected and evil be punished...the killers who stoned my wholly innocent son and left him for dead are known and still free."