Raj Thackeray ED: Summoned in connection with the IL&FS case, Mumbai Police prepared for MNS leader Raj Thackeray's appearance at the Enforcement Directorate by imposing Section 144 in parts of the city

Maharashtra politician and Maharashtra Navnirman Sena (MNS) chief Raj Thackeray appeared before the Enforcement Directorate (ED) in Mumbai today in a case linked to the collapse of shadow bank Infrastructure Leasing & Financial Services (IL&FS). Raj Thackeray is being probed for alleged links to a construction company - .Kohinoor CTNL - which received loans and equity investments worth Rs. 450 crore from IL&FS. Raj Thackeray, the cousin of Shiv Sena chief Uddhav Thackeray, reached the probe agency's office at around 11.30 am, with his family. He was accompanied by wife Sharmila, son Amit and daughter-in-law Mitali, who shifted to a nearby hotel after he entered the ED building.

Amid protests by MNS workers, the police increased security and banned gatherings around the building in Ballard Estate and some parts of Marine Drive, Dadar - Mr Thackeray lives in the area - and central Mumbai.

The police issued notices under sections of the Code of Criminal Procedure that empowered them to carry out arrests without a warrant.

"As there is a possibility of law and order issue in the view of Raj Thackeray's inquiry by the ED, we have given notices to MNS leaders and members," a senior police office confirmed.

Earlier today MNS leader Sandeep Deshpande and other party workers were detained by Mumbai Police in an effort to pre-empt any law-and-order problem. He was wearing a t-shirt decorated with the phrase "EDiot Hitler". The t-shirt also had the Nazi symbol printed on it.

Mr Deshpande strongly protested his detention, calling it "high-handed action" by the police. 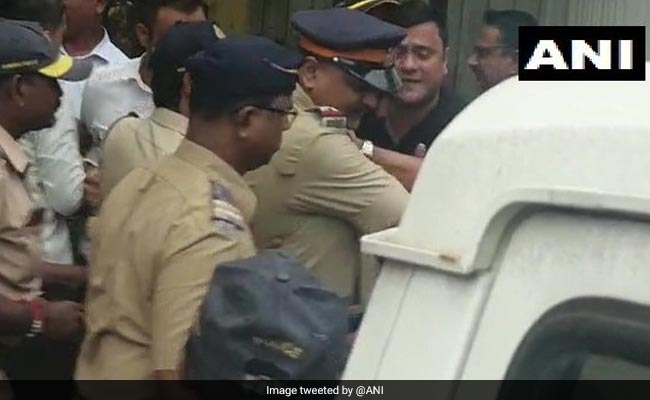 An MNS worker allegedly committed suicide in Thane on Wednesday.

Thane Police said no suicide note had been recovered, but Mr Thackeray, in a statement on Twitter, said "he took the extreme step... after getting perturbed by the news of ED sending me a notice".

Raj Thackeray, 51, has made at least two public appeals to party workers to maintain peace and harmony.

"No harm or damage should come upon any public property and the common man should not suffer in any way," a message posted on Twitter read.

MNS workers had earlier called for a bandh to protest the ED's summons; the bandh was withdrawn after an appeal by Raj Thackeray to respect the legal process.

"I do not expect any solid outcome from the inquiry," Uddhav Thackeray said.

With inputs from PTI, ANI, IANS