Dramatic Developments and Diplomacy: How India Secured its Nurses' Release in Iraq 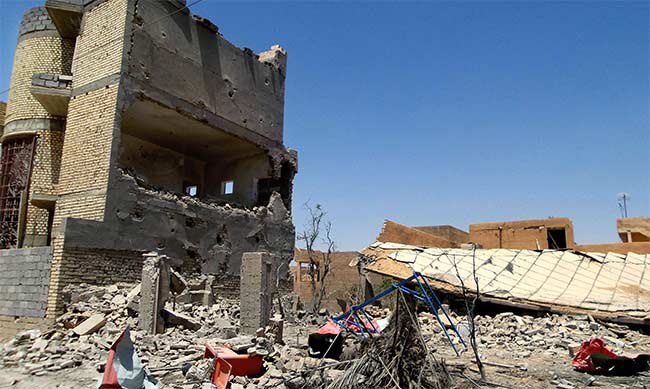 This photo taken on Tuesday, July 1, 2014, shows damaged homes due to clashes between fighters of ISIS and Iraqi security forces in Tikrit, 130 kilometers north of Baghdad, Iraq.

New Delhi: 46 nurses taken captive by the Sunni insurgent group ISIS in Iraq were freed on Friday and flown back home in what the Narendra Modi government is chalking up as its first diplomatic victory.

"It has been a day of dramatic developments," foreign ministry spokesperson Syed Akbaruddin said.

Many are crediting the diplomatic coup to Foreign Minister Sushma Swaraj, who, officials said, "worked day and night" and cancelled a trip to her constituency Bhopal in Madhya Pradesh to tackle the crisis. The minister reportedly held back-channel talks with several countries including Syria, Jordan and Turkey, which border ISIS territory. Significantly, 32 Turkish civilians were released by ISIS militants yesterday and over 50 consulate staff and others still captive.

Sources say Ms Swaraj reached out to her counterparts in the Gulf and other countries and sought their inputs. Last week, she reportedly met India's envoys in the Gulf seeking their assessment and discussing where to go for help. She also had a working lunch with envoys from those countries in Delhi. ( Iraq Crisis: Sushma Swaraj Meets Envoys to Gulf Nations)

The foreign ministry also got in touch with non-government contacts, past and present.

Efforts are now on to rescue 39 construction workers who were kidnapped in Mosul two weeks ago.

Promoted
Listen to the latest songs, only on JioSaavn.com
Critics questioned whether the government's efforts were belated. The foreign ministry said it was a considered decision.

"They made a judgement call and didn't want to come but as the situation got worse, they changed their mind... But then the access to land route is difficult... The only people who had it were the captors and so once this decision was taken, the nurses were brought out," Mr Akbaruddin said.