"Pakistan has very cleverly changed the complete demography of so-called Pakistan-occupied Kashmir, Gilgit-Baltistan. So, one is not very sure as to who is an actual Kashmiri, whom we are addressing these issues to," he said. 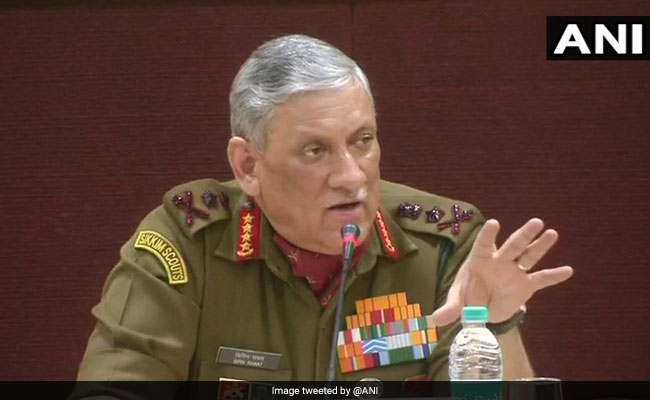 Army Chief General Bipin Rawat said on Wednesday that Pakistan has very cleverly changed the complete demography of Pakistan-occupied Kashmir (PoK) including Gilgit-Baltistan while adding that the identity of Kashmiris on the other side of the Line of Control has systematically been eroded by Islamabad.

Delivering the Yashwantrao Chavan Memorial Lecture in Delhi on Wednesday, the army chief said, "Every time something happens on our side (of LoC), we must always address it to say that it is also going to have a radical effect on other side (PoK). The issue is, on the other side, the complete demography has changed."

"Pakistan has very cleverly changed the complete demography of so-called Pakistan-occupied Kashmir, Gilgit-Baltistan. So, one is not very sure as to who is an actual Kashmiri, whom we are addressing these issues to," he said.

General Rawat further said, "People from Gilgit-Baltistan (part of PoK) are also now being taken over gradually (by Islamabad). So, to say that there is an identity between our side (of LoC) of Kashmir and the other side, then the identity thing has gradually been eroded very cleverly by the Pakistanis. That is an issue we have to look at."

The army chief said that the tolerance levels of the people in Jammu and Kashmir have "reduced and perceived alienation" as the youth in the region are being "indoctrinated to act irrationally."

"In recent times, the tolerance levels of the public in Kashmir have reduced and perceived alienation is indicative of a definitive aspirational deficit amongst the local youth. The Kashmiri youth is being indoctrinated to act irrationally. The proliferation of social media has further compounded the challenge and contributes towards the spread of an anti-establishment narrative," he highlighted.

General Rawat said, "Perceptions in Jammu and Kashmir is based on whose story you are listening to. Thus, making peace narrative is very different. These narratives are built around the constructs of radicalisation, alienation, agitation, religious fundamentalism and anti-nationalism on one hand and the perception of a Kashmiri common man on the other."

General Rawat also expressed concern over allowing funeral processions of terrorists. He said that those who are glorifying terrorists as brave hearts are "possibly trying encouraging more people to join the terrorist ranks."

The army chief's comments come after two Central Reserve Police Force or CRPF jawans sustained injuries on Wednesday in a stone-pelting incident in Jammu and Kashmir's Budgam district. A group of people had resorted to stone pelting during an ongoing encounter between the security forces and the terrorists in Chathergram village.