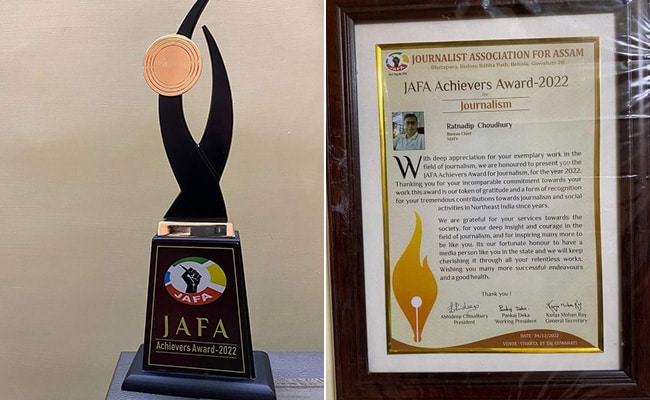 NDTV's Ratnadip Choudhury has been honoured with the Journalist Association For Assam (JAFA) Achievers Awards 2022 in journalism.

JAFA notes Ratnadip's "tremendous contribution to journalism and social activities in the Northeast for years".

JAFA is a leading organisation for journalists working at the grassroots level. The JAFA awards for rural journalists are very popular and are considered prestigious in the Assam media.

This year, JAFA launched the Annual Achievers Awards for a wide range of categories. The nominations were decided upon by an eminent jury of the Assam media.

Winners of 45 awards across sectors were selected by an esteemed jury.

"We started the awards last year and this was the second edition. Last year, we conferred the award on rural journalists since our key focus area is rural journalism. This year we have started the achievers' awards to honour people who have done exemplary work in public life in Assam, including police officers, public administrators, doctors, educationists, and journalists who have an unparalleled body of work and contribution to public life in Assam," said JAFA president Abhideep Choudhury.