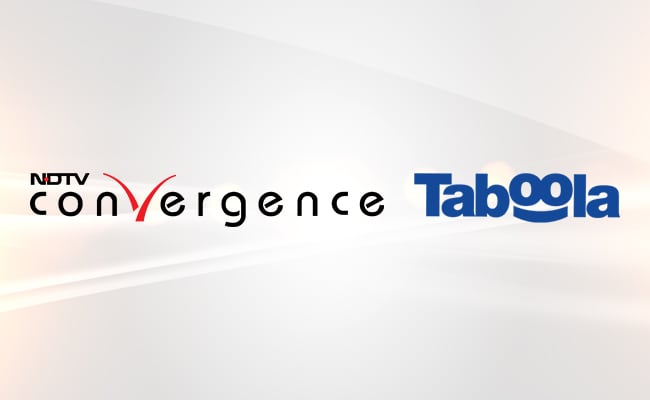 In the latest evidence of the unparalleled market leader position of NDTV Convergence, the company has struck an unprecedented five-year deal with Taboola, the world's largest content discovery platform.

The five-year deal ties NDTV Convergence exclusively to Taboola and involves a minimum guarantee of more than Rs 300 crore for NDTV Convergence, making it one of the largest deals not just for digital content but for the media space in its entirety.

"Like NDTV, Taboola operates with the user at the centre of its universe which is what makes this such a natural fit," said Suparna Singh, CEO of the NDTV Group. "Taboola's energy and innovation allow us to enlarge our own goals; we share their pride and excitement in learning, redefining, and then recreating all over again. And this deal proves that Brand NDTV remains unchallenged and the go-to for world-class companies."

The new partnership is vastly north of the last NDTV-Taboola arrangement that lasted three years and was worth Rs 100 crore based on traffic projections.

NDTV.com has 200 million uniques (source: Google Analytics, October 2018), making it India's largest news website and the 23rd-largest in the world, ahead of Washington Post, Huffington Post and others (source: Similar Web, Unique Visitors for News and Media Category, October 2018).

This is the largest deal that Taboola has ever signed in the APAC region. Taboola uses its presence on sites like NDTV to recommend content from across the internet to the audience and to offer highly-personalized native advertising.

"The growth of the mobile internet in India is skyrocketing, and with over half a billion smartphone users, its mobile adoption is second only to China. Mobile users are continually looking for those "moments of next," and publishers such as NDTV are well positioned to deliver a dynamic, personalised content experience to their readers," said Adam Singolda, founder and CEO of Taboola. "We are humbled that NDTV, our oldest and largest partner in India, has made a long-term, five-year commitment to joint innovation in this most exciting market."

NDTV Group And Broadcast Both Declare Profit For Q2