On June 5, 2017, reportedly under political pressure to act fast, and irrespective of any evidence, the CBI was forced to act in violation of its own guidelines. The CBI's political masters enforced a raid against the journalist-founders of NDTV in a blatant attempt to intimidate the media across India. These raids come at a time when the media is under attack in different parts of the country.

The raids were for a case that stands no scrutiny and which NDTV will challenge in court.

The FIR alleges that in 2009, ICICI Bank, the largest private sector bank in India, restructured a loan and, on account of the restructuring, reduced the interest by Rs 48 crores.

In fact, the restructuring was part of a loan that was not just paid back, but returned ahead of schedule by NDTV's founders, who are both journalists. The renegotiated terms included a reduction in interest (a normal business practice by all banks in India and around the world, particularly at the height of the worldwide financial crisis in 2008).

Under pressure from its political masters, the CBI got basic facts wrong in its FIR. Take a look:

1. To start with, it was Rs 6 crores and not Rs 48 crores that was restructured.

In any objective and non-political circumstances, the CBI could and would easily have verified the basis of its fake case by simply checking documents. 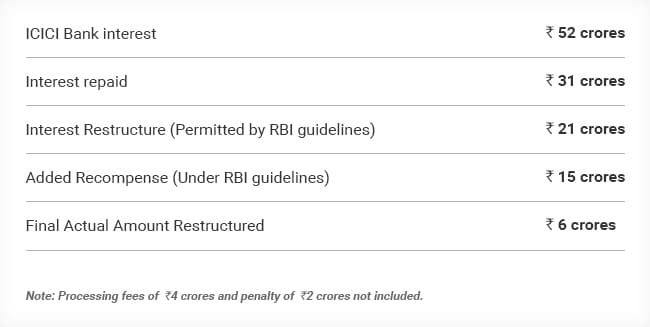 2. The CBI manual lays down 15 steps that it is required to undertake before any raid. Apparently under political pressure to raid immediately, in haste, the CBI skipped virtually all of these mandated steps.

3. Once again revealing how acting in haste under political pressure has its terrible downside for the CBI, the agency makes another outrageous "error" - or did its political masters instruct or encourage deliberate deceit?

4. The CBI and its political masters are aware (there is clear recorded evidence and emails) that the loan was sanctioned and repaid and restructured under the direct authority of two of the finest, most honest and most respected leaders of finance that India has ever had: KV Kamath and Chanda Kochhar. In 2008, KV Kamath oversaw the sanctioning of the loan. Mr. Kamath is one of the greatest and most respected executives of India. He now heads the BRICS Bank (NDB). For the CBI to drag him into this is shocking and bad for the image of India. In 2009, it was the most respected banker in India, Ms. Chanda Kochhar - known in India and around the world for her integrity - who oversaw the repayment and restructuring of the loan.

Shame on the CBI for questioning the integrity of these giant leaders of this nation.

5) Under these political circumstances, the CBI has made a false accusation against ICICI Bank that its restructuring of the loan was incorrect. The RBI clearly and repeatedly allows and endorses banks' decisions to restructure interest rates during repayment of loans. ICICI Bank followed RBI guidelines and did nothing wrong. According to its annual accounts, ICICI Bank had similarly and completely legally restructured loans worth over Rs 2,000 crores for other companies in the same year, i.e. 2009 (the SBI also restructured multiple loans in a similar legal manner).