"Nothing But Compassion" For Migrants, Says Outgoing White House Chief

The remarks were a sharp contrast to the rhetoric of Trump who regularly appeals to his overwhelmingly white political base by taking a hard line on immigration. 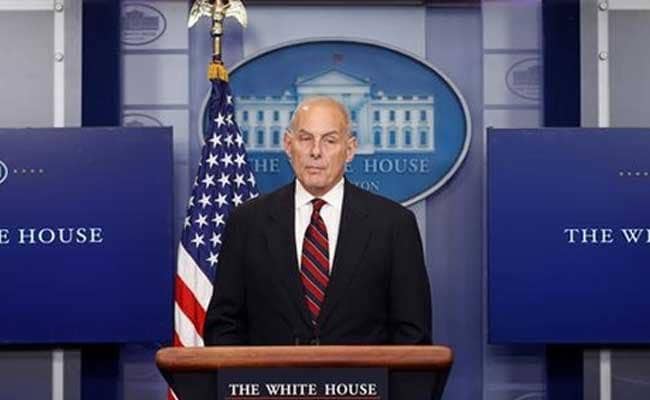 Outgoing White House chief John Kelly said he had "nothing but compassion" for undocumented migrants crossing into the US and undercut the idea of a border wall in an interview Sunday that jarred with President Donald Trump's tough rhetoric on immigration.

Speaking as a partial government shutdown went into a ninth day due to an impasse over Trump's demands for funding for a wall at the US-Mexico border, Kelly told the Los Angeles Times: "To be honest, it's not a wall."

"But we left a solid concrete wall early on in the administration, when we asked people what they needed and where they needed it."

But his relationship with the president reportedly deteriorated and he is due to be replaced at the end of the year by Mick Mulvaney, who currently serves as budget director.

Trump has been excoriated by opposition Democrats, who oppose his demand for $5 billion in border wall funding, after he blamed them for the deaths of two Guatemalan children in US custody in a tweet on Saturday.

"Illegal immigrants, overwhelmingly, are not bad people.... I have nothing but compassion for them, the young kids," Kelly told the LA Times adding that many had been manipulated by traffickers.

The remarks were a sharp contrast to the rhetoric of the president who regularly appeals to his overwhelmingly white political base by taking a hard line on immigration.

Building a wall along the 2,000-mile (3,200-kilometer) US-Mexico frontier was a central plank of his 2016 election campaign.

He has spoken of an "invasion" of migrants and complained of "many gang members and some very bad people" among a thousands-strong caravan of immigrants that traveled to the US in October.

He has also threatened to cut aid to Guatemala, Honduras and El Salvador, despite migrants from those countries saying they are fleeing poverty and gang violence.

In comments that are likely to irritate his boss, Kelly said the way to halt illegal immigration was to "stop US demand for drugs, and expand economic opportunity" in Central America.