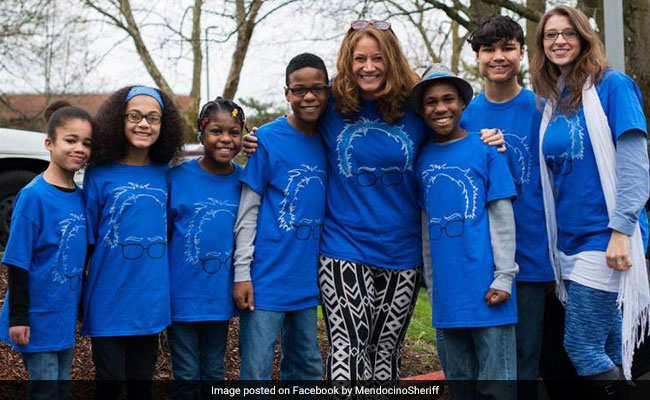 A local fire department had patrolled the area an hour before tourists spotted the body. (File)

Officials recovered a body floating near a Northern California cliff where a family's SUV plunged 100 feet into the ocean, setting off a search for three missing children.

The discovery Saturday could be the first significant break nearly two weeks after investigators say the GMC Yukon was intentionally driven off the scenic Pacific Coast Highway. The vehicle was found upside down and partially submerged at the bottom of the cliff, and authorities recovered the bodies of two women and three of their six adopted children.

A couple vacationing near the coast spotted the body floating in the surf not far from the crash site on Saturday afternoon, the Mendocino County Sheriff's Office said. A third bystander pulled the body onto the beach. Authorities have yet to identify the body, which they described as that of an African-American female.

The two women in the crash were a married couple and had been under investigation by police and child services officials in the three states where they had lived. The deaths also have raised suspicions about the motives of the two women, both white, in adopting black children.

Jennifer Jean Hart - who was the driver - and her wife, Sarah Margaret Hart, both, 38, were found dead. Also killed were Markis, 19, Jeremiah, 14, and Abigail 14. Three other children, Devonte, 15, Hannah, 16, and Sierra, 12, were not found and are feared to be dead. A DNA test, which could take several weeks, will determine whether the body found on Saturday was either Hannah's or Sierra's, the sheriff's office said.

A local fire department had patrolled the area an hour before the tourists spotted the body. The sheriff's office said it's likely that a storm passing through Northern California had caused the body to drift closer to the beach.

The California Highway Patrol revealed last week that the crash was not an accident, raising questions about the family's history and what may have preceded the crash.

Greg Baarts, acting assistant chief of the California Highway Patrol's northern division, said preliminary data from the SUV's air bag module suggested that the vehicle probably came to a stop at a gravel pullout roughly 70 feet from the cliff before it accelerated and "went straight off the edge." Investigators also did not find any signs of an accident, such as tire or skid marks, or evidence suggesting that Jennifer Hart had lost control of the SUV.

Authorities believe the family left their home in Woodland, Washington - leaving behind many of their belongings, including a pet and some chickens - and drove more than 500 miles south to California's Mendocino County. The family was in Newport, Oregon, about 160 miles southwest of their home, on the morning of March 24, and kept traveling south until they reached Fort Bragg, California, in Mendocino County that evening, according to the California Highway Patrol.

The family's 2003 GMC Yukon LX was found at the bottom of the cliff in nearby Westport, California, two days later.

Days before the family left Washington, child services officials there had begun investigating the Harts for "alleged abuse or neglect." The Washington State Department of Social and Health Services said it tried to contact the Harts on March 23 after receiving a report of alleged abuse but was unable to reach them. The agency tried a second time on March 26, the day the SUV was found, and again the next day.

Since the crash, a troubling narrative of alleged abuse has emerged, dating several years to when the family was living in Minnesota. Court documents there show that one of the couple's daughters had come to school with bruises on her back and stomach. Sarah Hart told police that she lost her temper and bent the girl over a bathtub and spanked her. She was convicted of misdemeanor domestic assault and received a 90-day suspended jail sentence after the 2011 incident. But according to the Oregonian, the girl, Abigail, told police that Jennifer Hart was the one who had hit her.

The Harts later moved to a suburb in Portland, Oregon. Child welfare officials in that state also were alerted of potential abuse or neglect, the Oregonian reported, citing police records. But nothing came of the investigation. The family then moved across the Columbia River to a small town in Washington state. There, the couple's neighbors recalled unusual encounters with the Hart children.

Bruce DeKalb said one of the sons, Devonte, came to his home several times in March to ask for food and said his parents weren't feeding him. The teen also asked him and his wife to call Child Protective Services, DeKalb told The Washington Post. Devonte captured the world's attention in 2014, when he was photographed sobbing in the arms of a white police officer in Portland, where people had gathered in support of civil rights protests in Ferguson, Missouri.

A few months after the Harts next door in 2017, DeKalb said, one of the daughters, Hannah, pounded on his door at 1:30 a.m. She had jumped out of the family's second-story window and ran through the woods toward the neighbor's house. The 16-year-old, who DeKalb thought was only 7 and was missing some front teeth, was "rattled to the bone."

Officials said they have searched the family's home, as well as the couple's bank and credit card statements and phone records. They have yet to say whether they have found any clues of what may have led to the family's deaths. They said they have not found suicide notes.

Promoted
Listen to the latest songs, only on JioSaavn.com
The Washington Post's Kevin Sullivan and Marwa Eltagouri, plus Maureen O'Hagan, contributed to this report.