Donald Trump spoke at the opening session of the Global Call to Action on the World Drug Problem at the United Nations. 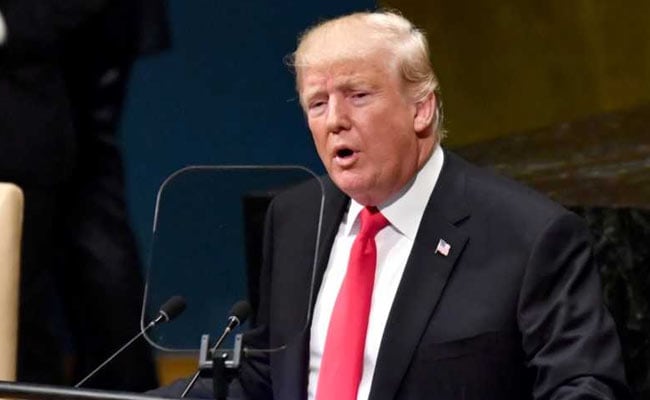 We reject the ideology of globalism, and we embrace the doctrine of patriotism", Donald Trump said.

US President Donald Trump, the rockstar of the biggest week of the year for the United Nations, used the occasion of addressing the UN General Assembly, perhaps, as an election speech, ahead of the midterm elections in the US on November 6. Donald Trump, putting 'America First', said "We reject the ideology of globalism, and we embrace the doctrine of patriotism". His comments were in complete contrast to what the Secretary General had said a few minutes ago focussing on the need for "multilateralism".

These are the highlights of Donald Trump's speech.

1. Was Donald Trump late and why the UNGA laughed?

Historically, the US is the second speaker on the day of the opening of the UN General Assembly or UNGA. Brazil has traditionally spoken first. This time though, Donald Trump, it seems, was late. The last time a US President was late for the UNGA address was in 2016. Like in 2016, the President of the General Assembly proceeded onto the next speaker, Chad's leader.

When Donald Trump started by saying "in less than two years my administration has accomplished more than almost any other administration in the history of my country," laughter resonated in the UNGA. He replied "I didn't expect that".

The last time Trump addressed the UNGA he warned the US would "totally destroy North Korea" if forced to defend itself or its allies. Donald Trump called North Korea's leader "Rocket Man" and said he "is on a suicide mission for himself". This time, the US President praised Kim Jong Un's courage. Donald Trump's tirade this time was targeted on Iran - it was softer and careful to not isolate the US further on taking immediate action against the Asian nation. Calling the situation in Iran 'a corrupt dictatorship', which is responsible for the humanitarian crisis in Syria, he said "Iran's leaders sow chaos, death, and destruction" asking "all nations to isolate Iran's regime' by putting "economic pressure".

3. Germany's smirk and a delicate warning for China

This may qualify as the second laugh garnered by Donald Trump during his address. The German foreign minister Heiko Maas was seen smirking when Mr Trump warned Germany about getting too "dependent on Russia". Donald Trump said "Germany will become completely dependent on Russia's energy" and be vulnerable to "extortion and intimidation" "if it doesn't immediately change course".

Russia's Nord Stream 2 pipeline is controversial since it will bypass countries like Poland and Slovakia on its way to Germany. This will mean neither of the two countries will be able to collect lucrative gas transit fees.

As for China, Donald Trump said "I have great respect and affection for my friend, President Xi, but I have made clear our trade imbalance is just not acceptable. China's market distortions and the way they deal cannot be tolerated." This after the US announced tariffs recently on another $200 billion in Chinese-made goods for a total, so far, of $250 billion.

4. Warning for the UN and the ICC:

Donald Trump restated his warning that the UN Human Rights Council "had become a grave embarrassment" to the UN, "shielding egregious human rights abusers while bashing America and its many friends". Mr Trump stated Nikki Haley's "clearly laid out agenda for reform" wasn't followed which is why "We withdrew from the Human Rights Council, and we will not return until real reform is enacted".

Donald Trump's attack against the International Criminal Court, an organization the UN indirectly works with, although not unexpected, was clearly a statement of not backing down. The ICC is set to investigate Afghan War crimes by the US. No wonder Trump called the ICC an "unelected, unaccountable, global bureaucracy".

Trump gave India's example of being "a free society over a billion people, successfully lifting countless millions out of poverty and into the middle class" as he tried to give the reflect it is possible to work in a diverse environment and still work "toward a common future" like the UN.