"You violated, objectified, and embarrassed me," Alex Bozarjian wrote. "No woman should EVER have to put up with this at work or anywhere!! Do better." 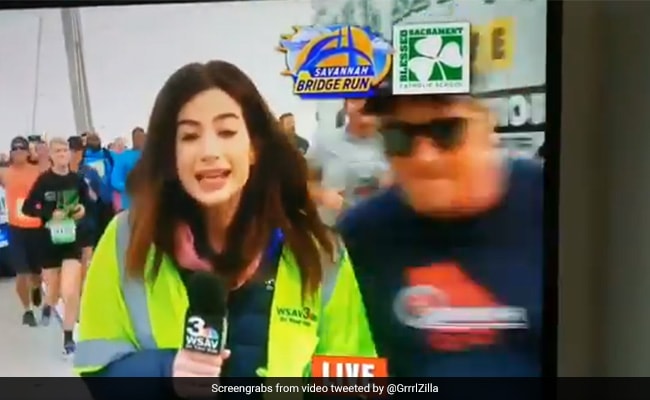 The Georgia man who was captured on video swatting at the backside of a female reporter while she spoke on live TV has been arrested on a misdemeanor charge of sexual battery, according to police records.

A week ago, Alex Bozarjian, a reporter for NBC affiliate WSAV-TV, was standing along the route for the Savannah Bridge Run and reporting on the race's atmosphere when a man smacked her behind as he ran by. Bozarjian was visibly shaken and fell silent for a few moments, video of the incident shows.

"You violated, objectified, and embarrassed me," she wrote. "No woman should EVER have to put up with this at work or anywhere!! Do better."

The man was eventually identified as 43-year-old Thomas Callaway of Statesboro, Georgia, who went to Bozarjian's TV station to offer an on-camera apology that aired Tuesday evening, reported the Associated Press.

"It was an awful act and an awful mistake," Callaway said, explaining that he intended to pat Bozarjian on the back or shoulder and did not realize he had violated her in a sexual way until he saw the video.

By then, Bozarjian had already filed a report with the Savannah Police Department. On Friday afternoon, authorities arrested Callaway, according to jail records.

"It's not OK to help yourself to a woman's body just because you feel like it," Bozarjian said during an interview with "CBS This Morning." "It's not playful."

To the man who smacked my butt on live TV this morning: You violated, objectified, and embarrassed me. No woman should EVER have to put up with this at work or anywhere!! Do better. https://t.co/PRLXkBY5hn

"I think in order to make any kind of change, you have to be a little bit drastic," Bozarjian said. "You have to, kind of, chip away at this toxic culture that permeates our society."

Joseph Turner, a lawyer for Callaway, told "CBS This Morning" that Callaway was a "loving husband and father" who "did not act with any criminal intentions."

Bozarjian told CBS that the most important thing to her was not Callaway's intentions, but the message his actions sent.

"He took my power, and I'm trying to take that back," Bozarjian told CBS.

In the immediate aftermath of the incident, Robert Wells, director of the Savannah Sports Council, said in a statement to The Washington Post that Callaway had been banned from registering in any other races organized by his group. Wells said his council and Enmarket, the race's title sponsor, "take this matter extremely seriously and fully condemn this individual's actions."

Bozarjian's TV station said in a statement to the Associated Press Friday that Callaway's conduct was "reprehensible and completely unacceptable."

"No one should ever be disrespected in this manner," the WSAV-TV statement said. "The safety and protection of our employees is WSAV-TV's highest priority."