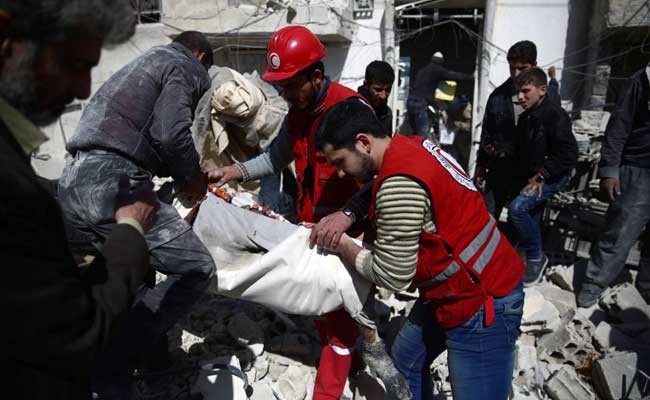 Members of the Syrian Arab Red Crescent and residents search through the rubble for bodies following an airstrike in the rebel-held city of Douma in Eastern Ghouta. (AFP Photo)

Ankara: Saudi jets today arrived at a Turkish base to join the air campaign against ISIS terrorists in Syria only hours before a ceasefire is to take force, local media reported.

The base is already hosting US, British and French war planes taking part in the strikes against ISIS fighters in Syria.

The partial truce to end hostilities in Syria, brokered by Russia and the United States, is due to begin at midnight. The deal excludes the ISIS terrorist group and other extremists.

Turkey today expressed alarm over the viability of the ceasefire as the Syrian regime and its ally Russia pressed ahead with an offensive.

The two overwhelming Sunni Muslim powers, Saudi Arabia and Turkey, both see the ousting of Syrian President Bashar al-Assad as essential to ending Syria's five-year civil war and are bitterly critical of Iran and Russia's support of the Syrian regime.

Ankara has said it is in favour of a ground operation in Syria, but only if it is conducted in coordination with Saudi Arabia as well as Western and Gulf members of the anti-ISIS coalition.

Turkish Foreign Minister Mevlut Cavusoglu on Thursday said: "We have since the beginning argued for the necessity of ground operations and all kinds of strategic moves to be carried out in addition to the air campaign."

US' Aid Offer To Covid-Stricken North Korea "Got No Response": Joe Biden