Reporter's Diary: We Flung Ourselves Down, Then Inched to the Window 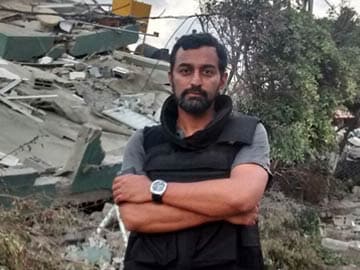 Gaza: We met our guide and translator, a young woman called Najjam, outside the apartment block where we will be staying for our time in Gaza. It's near the beach, like most of the other hotels where the foreign press pack is camping out.

How's it going, we asked her. Peaceful, she said. By last night, the day's death count was 76. That, by current Gaza standards counts for a peaceful day.

But at night, as we settled in, there was a high keening sound followed by a dull explosion right next to the building. We flung ourselves down, and then inched to the window. About 200 yards away, a cloud of smoke rose from an empty patch.

Was this an incoming missile, or outgoing ? It was too dark too see.

Within a few hours, the hotels across the road, also packed with journalists began to evacuate. They had received a message from the IDF (Israeli Defence Forces) of an impending attack.

By then, our entire building was in the lobby, milling around, confused, tense.

Finally, we slept not in the comfort of our rooms, but bunked down in a safe zone on the ground floor of the building. Mattresses had been laid out by the family that runs the building; by Gaza standards, this was still decadent.

Promoted
Listen to the latest songs, only on JioSaavn.com
We woke to the dull, steady crump of bombardment. And to news of a 72-hour ceasefire meant to begin at 8am. It is past 8am. Gaza is quiet, for now. The hotels across the road are intact. Lets see what tonight is like.