Poland Prime Minsiter Mateusz Morawiecki's decision to scotch involvement in the summit of central European nations comes after the latest salvo in a long row between Poland and Israel over history. 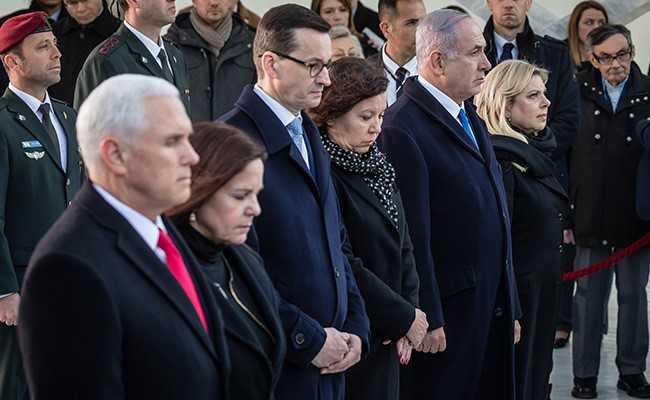 Poland's Prime Minister Mateusz and Benjamin Netanyahu during a ceremony in Warsaw.

Poland's prime minister on Monday cancelled Warsaw's participation in a Jerusalem summit, accusing an Israeli minister of "racist" comments about the actions of Poles during the Holocaust, further souring relations between the two nations.

Mateusz Morawiecki's decision to scotch Poland's involvement in the summit of central European nations comes after the latest salvo in a long row between Poland and Israel over history.

Israel's Foreign Minister Israel Katz on Sunday told a Tel Aviv-based international television station that "there were many Poles who collaborated with the Nazis, and like (former PM) Yitzhak Shamir, whose father was murdered, said, 'Poles suckle anti-Semitism with their mothers' milk'."

Morawiecki announced on Monday that Poland's foreign minister would not be attending the Jerusalem summit due to Katz's comments, after he had himself pulled out on Sunday over earlier comments by Israeli Prime Minister Benjamin Netanyahu.

"The words of the Israeli foreign minister are racist and unacceptable," Morawiecki said, adding that Katz was "trying to insult the Poles by distorting history."

This week's summit with Israel and the Visegrad Four (V4) -- the Czech Republic, Hungary, Poland and Slovakia -- would now be postponed until later in the year, Slovak government spokeswoman Patricia Macikova told AFP, after Poland pulled out.

"The prime ministers of Slovakia, the Czech Republic and Hungary will use the visit for bilateral meetings with Israeli Prime Minister Netanyahu as well as a trilateral meeting," she added, speaking for Slovak premier Peter Pellegrini, who currently chairs the V4 group.

However, Israeli foreign ministry spokesman Emmanuel Nahshon said it was not immediately clear whether Israel would hold a summit with the remaining participants or instead organise a series of separate meetings.

The row between Poland and Israel broke out last week when Netanyahu -- who was quoted in Haaretz newspaper as saying that "the Poles collaborated with the Nazis" -- was condemned in Poland for appearing to accuse all Polish people of cooperating with Nazi Germany during World War II.

Warsaw has long been at pains to state that Poland, which was occupied by Nazi Germany, did not collaborate in the Holocaust although individual Poles gave up Jews to the Nazis.

"The Polish government in exile was warning (about the Holocaust) and its delegation in occupied territory, namely the underground army, condemned to death blackmailers of different nationalities who denounced the Jews (to the Nazis)," Morawiecki told Polish media Monday.

"So as a state we behaved properly," he added.

It is also undeniable that Polish Jews perished at the hands of their non-Jewish neighbours in isolated cases.

Polish-American historian Jan T. Gross triggered shock in Poland in 2001 with his book "Neighbours", in which he revealed that in 1941 during the Nazi German occupation, several hundred Jews were massacred by their Polish neighbours in the northeastern town of Jedwabne.

The Israeli prime minister's office said on Friday that Netanyahu had not implicated all Poles in the Holocaust, insisting he was "misquoted".

Netanyahu was in Warsaw last week for a two-day summit on the Middle East, co-hosted by Poland and the United States, which focused on isolating Iran while building Arab-Israeli ties.

The fresh controversy in Polish-Israeli ties comes after a row last year over a Polish law that made it illegal to accuse the Polish nation or state of complicity in Nazi German crimes.

After protests from Israel and the US, Poland amended the law to remove the possibility of fines or a prison sentence.