'No Means No': Norway Sends Migrants On Anti-Rape Courses 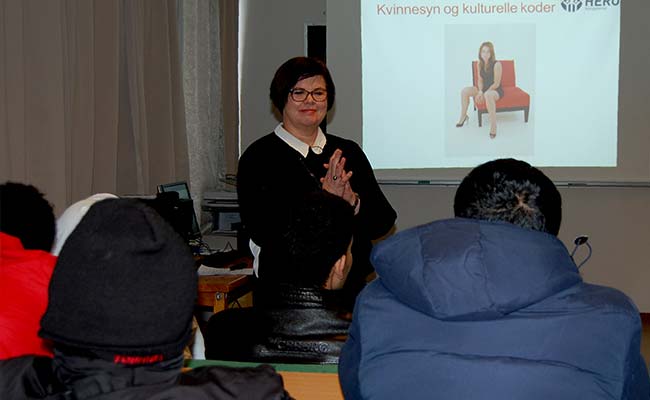 An instructor addresses Syrian and Sudanese asylum seekers during a courses to prevent violence against women in Ha, Norway. The text on the board reads "The perception of women and cultural codes". (AFP photo)

Ha, Norway: "She kissed him - it's an invitation to have sex." The asylum seeker's answer hangs in the air. The instructor's smile falters, and an explanation is required.

In Norway, migrants are being given courses to prevent violence against women, especially rape, and to teach them how to interpret customs in a country that may seem surprisingly liberal to them.

The courses were introduced several years ago, but have become particularly topical after complaints of mass sexual assault on New Year's Eve in the German city of Cologne, by a crowd of mostly Arab and North African men.

This particular morning at the Ha reception centre in southwestern Norway, a dozen Syrian and Sudanese asylum seekers fidget in their seats in a small room as their group discussion starts.

The curtains are drawn and a space heater blasts out hot air to heat up the room, but the participants keep their jackets on.

"The idea behind this course is to talk about risk situations that can arise when it comes to rapes and sexual assaults," the group's leader Linda Hagen says, kicking off the class in Norwegian, with an interpreter translating to Arabic.

"We need your help so that we can together detect these situations."

What is the difference between love and sex? What do these pictures of women projected on a screen bring to mind, one with bare shoulders and the other veiled?

Can the use of violence be legitimate? How do you know if a woman is consenting to sex?

The participants brainstorm scenarios where cultural differences may cause misunderstandings.

Little by little, they warm up and begin to speak.

"If she wants come to my place, that means she's consenting," says one Syrian.

"But if she's drunk, how can I be sure that she wants to sleep with me?" asks a Sudanese man.

"If she says no, I don't do anything against her will," insists a third.

Those attending all seem to agree the course is useful.

"For me, I have no problem because my city is an open city and my sister, my mum, they're very similar to (the women) here," a 42-year-old Syrian tells Agence France-Presse, asking to use the pseudonym Mikael Homsen.

"But I have friends, they come from a different culture, from a strict family. For them, any part a woman shows (is) a sign she wants to have sex," he says.

The need for the course -- which is organised by Hero, a private company that runs 40 per cent of Norway's reception centres -- is exemplified when a video normally shown to secondary school students is screened.

In the clip, a party is in full swing. Two teens are making eyes at each other and they kiss. The boy pulls the girl, visibly tipsy, upstairs to a room and locks the door behind them.

He becomes increasingly physical with her, despite the signs of resistance she is displaying. "No means no," concludes the video.

But the video meets with a range of reactions from the participants.

"He tricked her but the girl should also have been clear and said no and not gone upstairs with him," says one.
"If a girl kisses me, I figure she wants to sleep with me," says another.

Linda Hagen intervenes, explaining: "In Norway, it's quite common to hug, to entwine, to dance very closely without it necessarily leading to a sexual encounter."

"Everyone is in agreement that rape is bad," she later tells AFP.

"But there are all these grey zones, these situations that are a little difficult to grasp... The problem can arise with any of us."

Hero launched its course after a series of rapes committed by foreigners in the southwestern town of Stavanger between 2009 and 2011.

"We invite the residents, both women and men, to have a dialogue about cultural norms and to take responsibility if they see something," says Hero's director Tor Brekke.

"It's not a magic formula, it's just mostly about making an arena for dialogue."

The Cologne incidents are on everybody's mind: 766 police reports filed, including 497 for sexual assault, which police have blamed on Arab and North African men.

"In my opinion it's not men who did that. They're animals. They're sick people," says Sulaiman Adel, a 42-year-old Syrian.

"We want German authorities to say who exactly did this, and not just say they're asylum seekers," adds Shero Demir, a 35-year-old also from Syria.

"They have to be expelled immediately to the country they're from. They can't live here."