At least the motive for the crime seems clear. "Nazis need no bathing fun!" Gauland said the thief shouted as he stole the 77-year-old lawmaker's shirt and pants. 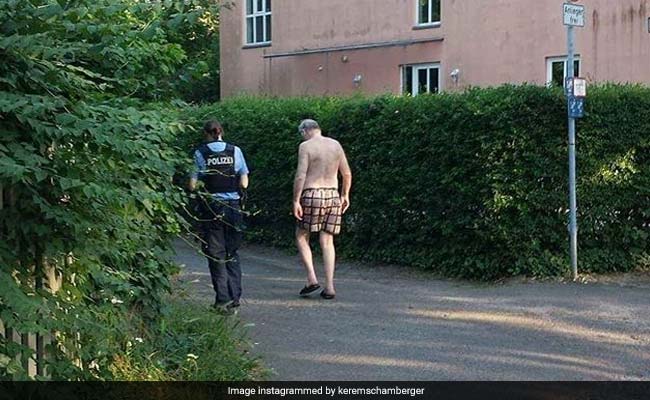 Police have yet to find the man who stole Alexander Gauland's clothes while he swam in a lake last week, forcing the co-leader of the German Parliament's most far-right party to walk half-naked through the streets - an image that is going viral on social media.

At least the motive for the crime seems clear. "Nazis need no bathing fun!" Gauland said the thief shouted as he stole the 77-year-old lawmaker's shirt and pants.

Gauland has never publicly defended the German Nazis, who during their 12-year rule started World War II, killed millions of people and tried to exterminate all Jews. But he has repeatedly suggested that it's time to stop apologizing for the past.

"If the French are rightly proud of their emperor, and the Britons of Nelson and Churchill, we have the right to be proud of the achievements of the German soldiers in two world wars," Gauland said in September, according to the Guardian. "People no longer need to reproach us with these 12 years. They don't relate to our identity nowadays."

A week and a half after he made that speech, the Alternative for Germany - a party co-led by him -- came third in a six-way national election, becoming the first far-right party to join the German Parliament since the Nazis.

The party's other leader, Alice Weidel, once wrote an email peppered with "Nazi-era connotations," according to Deutsche Welle - words such as Uberfremdung, or "foreign infiltration," which Weidel applied not to Jews but to "culturally foreign people such as Arabs, Sinti and Roma," as well as to "puppets of World War II allies" in Chancellor Angela Merkel's government.

Weidel is generally considered the more moderate of the party's two leaders.

As for Gauland, he has railed against foreigners of many kinds since co-founding Alternative for Germany, or AfD, in 2013.

He has called to ban Muslims from the country, Deutsche Welle reported, and once said that "not everyone who holds a German passport is German."

Gauland denied telling a German newspaper that a black athlete was good enough to play soccer but would not be desirable as a neighbor. But he did not deny calling for a political rival to be "dumped" in Turkey, where his ancestors were born, nor has he expressed regret for any of his statements.

"Why should I?" Gauland told The Washington Post in an interview before the September election. He went on to agree with another member of his party, who had objected to the Jewish Holocaust memorial in Berlin.

"He has spoken of a 'monument of shame' in the midst of the German capital," Gauland told The Post. "And that is totally correct."

The national election that month made Gauland's party the third-highest-polling in Germany and horrified much of Parliament, with some lawmakers seeing the AfD win "as a potential threat to Germany's democracy itself," Bethany Allen-Ebrahimian wrote for The Washington Post.

Parliament, however, had no option but to accept the new AfD members. Obscenities against the newly ascendant party competed with anti-immigration slogans in graffiti across Germany. Meanwhile, residents erased swastikas from the walls of Berlin.

And then, on Tuesday last week, a small act of revenge was reported on a lake shore southwest of the capital.

Gauland had undressed - either down to his boxers or swimming trunks, based on the now-viral photo - and gone into the Potsdam lake to escape the intense heat, Politico reported, quoting a report on Wednesday in the newspaper Markische Allgemeine.

As he swam, a man walked toward Gauland's clothes. What the man shouted varied slightly in the local reports - either "This is not a swimming place for Nazis," "No bathing for Nazis," or "Nazis don't need bathing fun."

In any event, the shouter made off with the clothes, and any hope that Gauland might have had of keeping the embarrassment private soon vanished.

"Other swimmers called the police without asking me," he told the newspaper, according to Reuters.

The lawmaker's house keys had been in his pants, so he had little option but to walk through Potsdam to the police station, accompanied by an officer and the gazes of anyone he passed.

"Gauland passed us with a police escort wearing swimming trunks," a witness told Markische Allgemeine, according to Politico. "It was a good day."

Germany remains, on the whole, a culturally introspective country, despite the far right's gains. After the photo of a slouching, shirtless Gauland made it into the national news this week, German commentators debated whether the mockery was justified.

"Can we laugh about Alexander Gauland in his swimming trunks? Of course, we can," Stern magazine wrote. "One should certainly make someone who belittles the killing of 6 million Jews feel that his theses are not wanted."

But other publications declined to publish the photo. "Everyone who retweets the 'Gauland in swimming trunks photo' and still wants to defend the constitution and human dignity tomorrow: Please think twice," Jochen Bittner, a journalist, wrote on Twitter.

Whatever Gauland felt about the theft, he didn't appear to mention it during a gathering of his party's youth wing over the weekend.

Instead, he lectured to the next generation of German nationalists about - what else? - his country's unhealthy hand-wringing over its past.

"Yes, we accept responsibility for those 12 years," Gauland said. "But, dear friends, Hitler and the Nazis are just a speck of bird s--- in over 1,000 years of successful German history."

(Except for the headline, this story has not been edited by NDTV staff and is published from a syndicated feed.)
Comments
Alexander GaulandGerman nazisfar-right leader