Meghan Markle's kind moment was shared across social media and internet users were quick to praise the interaction. 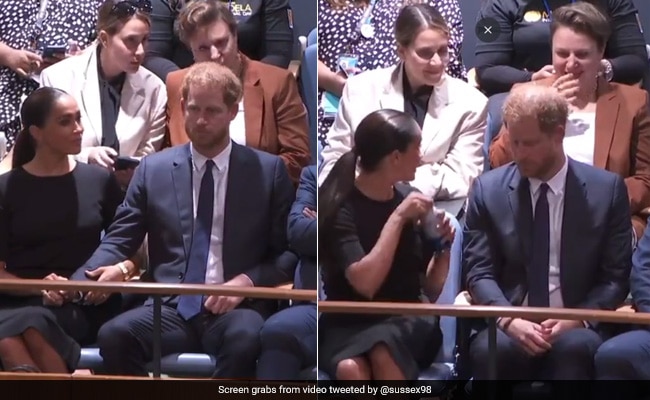 Duchess of Sussex Meghan Markle has been praised for giving a water bottle to a coughing woman at the United Nations headquarters. The incident occurred on July 18. Ms Markle was at the UN General Assembly in New York City, US, to support Prince Harry as he delivered the keynote address.

A video captured during the event showed the Duchess turning around to a woman who is coughing behind her and offering her a bottle of water. She is also seen pulling the bottle of water out of her bag and handing it to the woman.

The kind moment was shared across social media and internet users were quick to praise the interaction. One user wrote, “The people's Duchess. Always so aware of other people's needs.” Another added, “I'm completely bowled over by that.”

“To offer your bottle of water to another woman who is coughing tells me more of Duchess Meghan's character, than any hit piece book written about her,” said third. “WOW What a hero haha,” commented fourth.

The Duke and Duchess of Sussex were invited to the UN conference marking Nelson Mandela Day. During the event, Prince Harry condemned the US Supreme Court's decision to strike down the Roe v Wade ruling and called it the “rolling back of constitutional rights.”

The Duke also revealed the moment he knew Meghan Markle was his “soulmate”. “Since I first visited Africa at 13 years old, I've always found hope on the continent. In fact, for most of my life, it has been my lifeline, a place where I have found peace and healing time and time again,” Prince Harry said, adding, “It's where I've felt closest to my mother and sought solace after she died, and where I knew I had found a soulmate in my wife.”

Prince Harry and Meghan Markle in May 2018 in St George's Chapel at Windsor Castle in the United Kingdom. They share two children together - 3-year-old Archie and 1-year-old Lilibet.