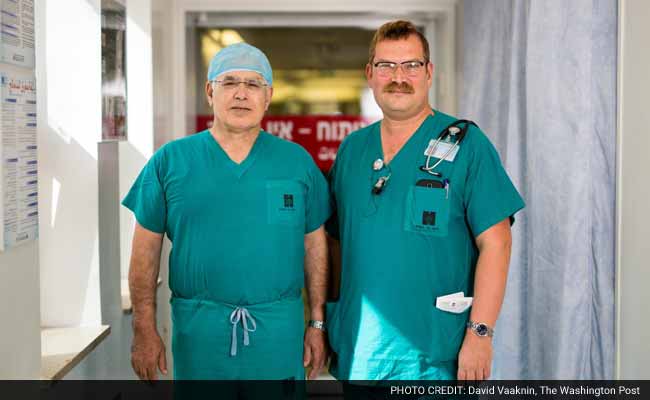 From left, Ahmed Eid, head of surgery, and Elchanan Fried, head of the Intensive Care Unit, at Hadassah University Hospital in Jerusalem on Thursday.

Jerusalem: This isn't really a good news story. This is a sad story about a special place where Jews and Arabs come together to heal the broken bodies of victims and their attackers, some of them children.
The staff call them "Bert and Ernie" or "Fried and Eid."

Ahmed Eid, 65, is a Muslim from the Galilee village of Dabburiya. Elchanan Fried, 41, is a Jew from Petah Tikva in central Israel. They both live in West Jerusalem.

For the past month - during a wave of Palestinian attacks on Jews and harsh Israeli responses, including shoot-to-kill countermeasures - the two have worked side by side.

On Oct. 12, two Palestinian cousins, ages 13 and 15, from East Jerusalem stabbed a 13-year-old Jewish kid on his bicycle outside a candy store. They also wounded a 21-year-old Jewish Israeli man.

The 13-year-old victim, whose name is being withheld at his parent's request, arrived at Mount Scopus in terrible shape.

"No blood pressure. Pulse was 40. Ventilated at the scene," said Eid, who rushed into surgery and began to work on his patient.

"More dead than alive," said Fried, who came to assist.

So did a Palestinian anesthesiologist from the West Bank, who worked alongside secular, ultra-Orthodox Jewish, Muslim and Christian doctors and nurses, some from Israel, some from the Jewish settlements, others from the Palestinian towns.

When the patient was stabilized, Eid went briefly to the waiting room to speak with the patient's father.
Eid told him: "Listen, your son is still alive. It's going to be okay." Eid noticed the father was a religious Jew.

"I told him my name is Ahmed Eid, I'm director of surgery. Then I made a joke, I guess. I said, 'An Ahmed stabbed your son, and an Ahmed is going to save your son.' "

Both doctors said they never ask whether the patient who comes through the door is a victim or assailant.

"We don't ask who you are. We treat the terrorist the same as we treat the victim," Eid said.
Fried was asked his opinion. "I rarely agree with Dr. Eid, but in this case I concur." He was making a joke. Both doctors smiled and looked at the time on their phones again.

Fried called Hadassah hospital "a unique bubble." He said half his staff in the ICU are Arabs. "Sometimes someone complains, but very, very rarely."

"We treat patients by medical priority. Most sick first. To us this is obvious. Maybe to the outside world, it is hard to understand," said Osnat Levtzion-Korach, director of the hospital.

At the same time Fried and Eid were helping the victims, a few miles away at Hadassah University Hospital in Ein Kerem, a Jewish doctor treated the Palestinian assailant, 13-year-old Ahmed Manasra.

His 15-year-old cousin was shot dead at the scene by an Israeli police officer. Ahmed Manasra was run over by a car as he fled.

Miklosh Bala, 46, director of the trauma unit, attended. Bala was born in the Soviet Union and came to Israel years ago, one of a million Russian Jews to immigrate here.

"The patient arrived accompanied by the security services, but it was not immediately clear what had happened, his age was not obvious, although it was clear he was a child," Bala recalled.

He does not call Manasra "the terrorist."

"We did not have a long conversation with him. We just did what was needed. He was conscious. We took his vitals and did what we would do for anyone who arrives in our department. He had a CT scan, a full medical evaluation, he was checked by a surgeon, an orthopedic doctor, everybody, it was all standard for someone with his injuries."

Bala said, "Only afterwards we heard the details of the incident. Suddenly the kid was in the headlines, but when he first arrived, we did not know what had happened. All we wanted was to see that he was alive, his eyes were open."

Minutes after Manasra was struck by the car, a crowd of onlookers surrounded him, a raw scene captured on video. As he lay bleeding in the street, an Israeli mob shouted, "Die!" They cursed him as the "son of a whore" and shouted at police to finish him off with a bullet to the head.

Bala recalled that Manasra "did not answer many of our questions. It was obvious that he was scared. His parents did not come until later, but our staff took good care of him."

In a speech in Ramallah earlier this month , Palestinian Authority President Mahmoud Abbas accused Israel of barbarism and pointed to the "coldblooded execution" of children by Israeli forces, including Manasra, whom he called a martyr for the Palestinian cause.

The following day, Prime Minister Benjamin Netanyahu accused Abbas of "lies and incitement" - and reminded his listeners that it was Palestinians stabbing Jews. The Israeli government released video and photographs of Manasra alive and well in a bed in the Hadassah hospital - alongside security camera footage showing Manasra and his cousin with knives in their hands.

Videos at the scene of knife attacks and other confrontations at checkpoints have often shown the Palestinian suspects lying on the ground, unattended.

Recently, the head of the Magen David Adom ambulance and emergency service created an outcry when he said his medics will treat attackers first if their injuries are worse.

The director of the ZAKA emergency response organization, composed of volunteers who assist medics, said it was a complex issue, but "we instruct our volunteers to first take care of all Jews, because they were harmed just because they are Jews, while the terrorist murderer is deserving of death," according to the Arutz Sheva news Web site.

Asked what it felt like to treat a boy who stabbed a boy, Bala said, "It is difficult to answer such a personal question. I have a 13-year-old son at home, and I did not really talk about it with my son. I do not understand what can make a 13-year-old carry out something like this."

Bala said, "I don't think I can't be criticized for saving a life. It is holiest of holies. I just don't understand the question when someone asks me why I saved the life of an attacker."
"That is my job," he said.