Madina, The 6-Year-Old Afghan Girl Who Will Never See London

Madina and her family left Afghanistan around two years ago with the aim of reaching Britain, joining thousands of migrants still crossing the "Balkan route" towards western Europe, although it was officially shut down in early 2016. 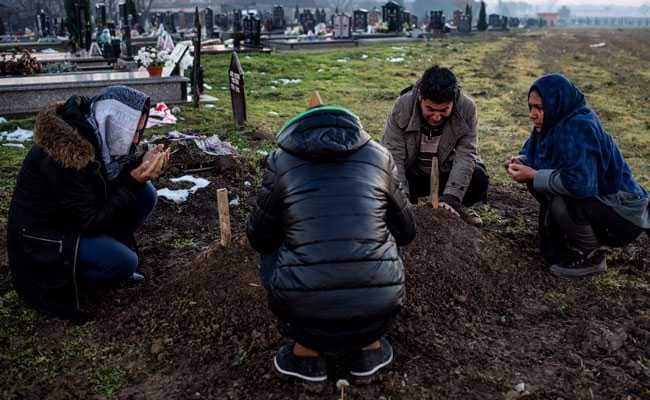 Sid. Serbia: Madina will never know London, the city her Afghan family hoped to reach. The six-year-old's body lies in a Serbian grave after she was struck by a train at the Balkan country's border.

The Husseinis left Afghanistan around two years ago with the aim of reaching Britain, joining thousands of migrants still crossing the "Balkan route" towards western Europe, although it was officially shut down in early 2016.

But once in Croatia, Madina and five of her relatives were intercepted by Croatian police and sent back to the Serbian frontier, according to her mother Muslima Husseini -- whose version of events is denied by Croatian authorities.

The family found themselves retreating along a railway line in the dark. "We heard a very loud noise, a train that was coming quickly" from behind, the mother told AFP.

Muslima recalls her panicked cries for her daughter, who was found lying in a pool of blood with her skull broken.

After her death on November 20, Madina was laid to rest in Sid, a northern Serbian border town. Her grave sits away from the Orthodox tombs that dominate the cemetery.

Madina's "avoidable death" is a fresh reminder to the European Union and regional authorities "that people are still in danger (in) the Balkans," said Andrea Contenta of Doctors Without Borders (MSF) in Serbia.

"The practice of pushing people back at EU borders continues to endanger people's lives," he told AFP.

This year, to the end of November, 143 migrants are known to have died between Turkey and the European Union, according to MSF.

Some were victims of car or train accidents, some drowned, and others committed suicide.

But beyond the public data, "we do not know how many people have lost their lives across the region," Contenta said.

Rahmat Shah Husseini, 39, sobs over the icy earth where his daughter was buried.

He then flicks through his phone to a photograph of Madina, with short hair, a cheeky smile and pink trainers that barely touched the ground as she sits. The picture was taken two days before she died.

"She often asked 'Are we there? Is this London?'" the father said.

He explained how he set off from the Afghan capital with 14 members of his family after receiving death threats for having worked for US forces.

After passing through Iran, Turkey and Bulgaria, the Husseinis were not together when the tragedy struck.

Muslima left first with five of the children, including 15-year-old Rashid, who speaks English. There was not enough money for all of them to try their luck at once, the father explained.

That afternoon the small group stopped to gather strength and eat biscuits in an abandoned house near the border, where they were dropped off by a taxi.

Then they crossed through a field, lowering and crossing a barbed-wire fence. They were in Croatia, Muslima recalled.

When police officers arrived, the mother asked for asylum and begged that they wait at least until the morning to send them back in daylight, and after the children had rested.

But her requests were refused and the police escorted them to the railway track, which the officers lit up with their flashlights before leaving the family.

Croatia's interior ministry denies this account of a police escort, saying Muslima "voluntarily" accepted to return to Serbia after the accident happened.

The family started walking. "Nobody told us that a train would pass," Muslima said.

The family took the motionless child's body back to the Croatian police and an ambulance was called.

Muslima said she was forced out of the ambulance and that a policeman even prevented her from looking through the window of the vehicle that soon left with Madina. The remaining relatives were again pushed back to the railway line.

Reunited in Belgrade, the family only learnt about her death two days later. The next day at dawn, they were driven with an imam to Sid, where her body was waiting. They were told she must be buried immediately.

The Husseinis refused what they felt was a hushed-up burial in the presence of family alone, disrespecting their traditions.

"Bury us with her!" Rahmat Shah recalls demanding. They were allowed four bottles of water to wash the body, then they gave in to the funeral plans.

Rahmat Shah wants to leave Sid and Serbia, where Madina will stay: nobody gave the Husseinis a death certificate, which would allow them to recover the body later.

Zagreb insists that "Croatian border police should not be blamed for the accident and the death of the child" and that the accident occurred in Serbia.

Promoted
Listen to the latest songs, only on JioSaavn.com
A spokeswoman for Serbia's government agency dealing with refugees said it had paid "all the funeral expenses" and "took special care to meet every wish of the grieving family".