Lake Powell In US, At The Epicentre Of Biggest Drought, Close To Deadpool: Report

Lake Powell, straddling the border between Utah and Arizona in the United States, is gradually drying up as a result of mega drought in the region. 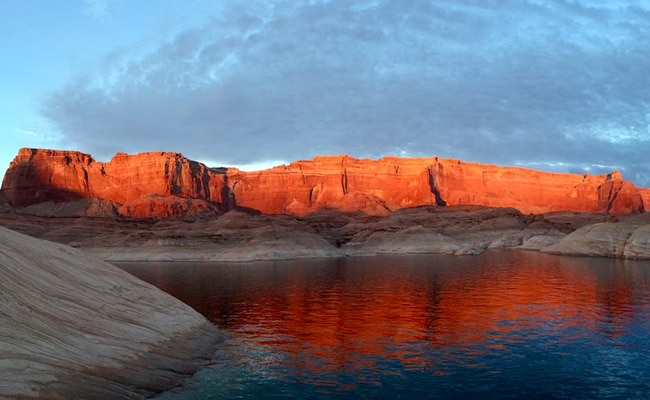 Lake Powell, straddling the border between Utah and Arizona in the United States, is gradually drying up as a result of mega drought in the region and there are chances it may disappear entirely in only a few decades, according to a report in Newsweek.

Lake Powell is a man-made reservoir on the Colorado River. The Glen Canyon National Recreation Area is a recreational space around it. The lake is the second largest reservoir in the United States by the total capacity after Lake Mead.

Lake Powell is the ideal playground, with approximately 2,000 miles of coastline, limitless sunshine, warm water, beautiful weather, and some of the most stunning scenery in the US.

According to the lake's website, people can rent a houseboat, stay at a campsite, or even take a guided adventure.

The Glen Canyon Dam encircles Lake Powell and creates hydroelectric power. If the water level falls below the intake pipes, the water flow will stop turning the hydroelectric turbines, and the dam will stop producing electricity, the report said. The generators would also be harmed if air entered the system, it added.

The Guardian said in a report last month that millions could face power crisis if the water level in the reservoir goes below the deadpool level.

When the lake is full, its dam can produce 1,320 megawatts of power annually - about the same amount as a large fossil fuel plant. But with water levels at record low level, hydropower production has dropped to 800 megawatts, the report had said.