On Dec. 22, Julie Nixon and David Eisenhower, now 70 years old, will celebrate their 50th anniversary. Their wedding united two of the country's most prominent political families at one of the most tumultuous times in its history. 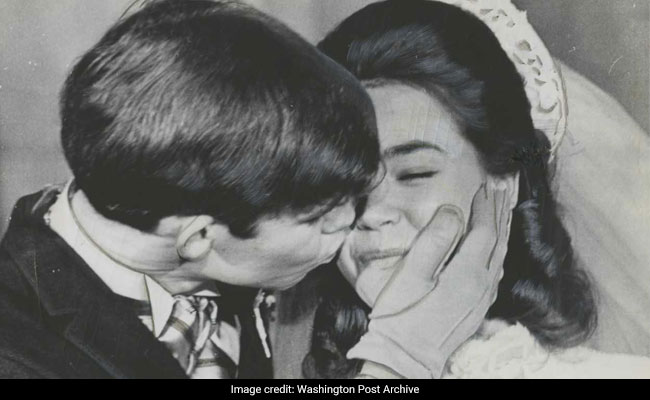 Julie Nixon was getting married. The church was booked. The reception venue was picked. The invitations were ordered. And then, there was a hiccup.

Her father was elected president.

Suddenly, the upcoming wedding of Richard Nixon's oldest daughter had taken on new significance. Her nuptials were set to take place in New York City seven weeks after the 1968 election. She was engaged to Dwight "David" Eisenhower II, the only grandson of former president Dwight D. Eisenhower. Nixon had served as Eisenhower's vice president.

What was already a match made in political heaven (or Mamie Eisenhower's book of schemes) now had the potential to become a true political spectacle - something Nixon himself thought was a very good idea.

"I told Julie that she should give serious consideration to waiting until after the inauguration and being married in the White House," Nixon remembered in his 1979 memoir.

To do so, Nixon wrote, was a "unique privilege." At the time, only 15 couples had ever been married in the White House. If 20-year-old Julie chose that path, she was likely to take on a princess-like status to the American public.

"Both she and David felt that they wanted their wedding ceremony to be as personal and non-political as it possibly could," Nixon wrote.

And so began a marriage that has lasted half a century. On Dec. 22, Julie Nixon and David Eisenhower, now 70 years old, will celebrate their 50th anniversary. Their wedding united two of the country's most prominent political families at one of the most tumultuous times in its history.

The year 1968 was marked by antiwar riots and protests, the assassinations of Martin Luther King Jr. and Robert Kennedy, the burgeoning of the black power movement and the women's movement, and Lyndon B. Johnson's stunning announcement that he would not seek re-election.

"And in the midst of all this, is this wedding," said presidential historian Carl Sferrazza Anthony. Even for those who didn't vote for Nixon, there was something about rooting for young love.

"It played a very subtle role in re-stabilizing if not the mind, then at least the heart of the country," Anthony said.

Julie and David had been in the public eye since they were children, and had stood on stage together at the 1957 inauguration of Eisenhower.

When they both chose colleges in Massachusetts - David at the all-boys Amherst, Julie at the all-girls Smith - they were reunited through a luncheon invitation from the Hadley, Mass., Republican Women's club. David called to see if Julie was planning to accept the invitation. She was not, and told him so.

"He must have liked the sound of my voice, because he dropped by my dorm a few days later with his roommate, and we went out for ice cream," Julie recalled in her 1986 biography of her mother. "Two days later he unexpectedly came again."

Soon, Julie and David were talking often, driving back to Washington together for holidays and appearing arm-in-arm at a high-profile debutante ball in the Waldorf Astoria. They announced their engagement to Julie's parents in March 1967, seven months before they told the public. That night, Nixon left a letter at his daughter's bedside:

"Dear Julie," it said. "I suppose no father believes any boy is good enough for his daughter. But I believe both David and you are lucky to have found each other." 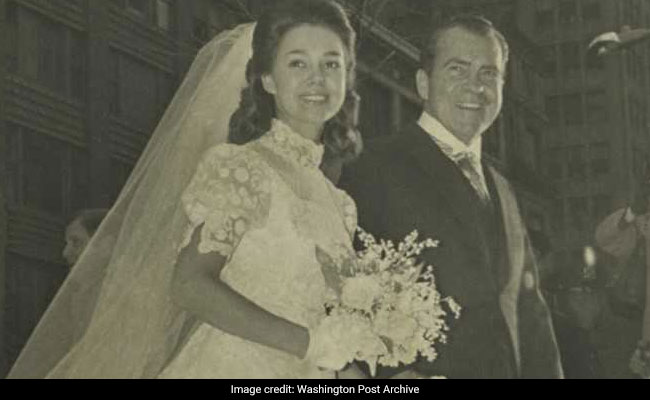 President-elect Richard Nixon escorting his daughter Julie Nixon into the Marble Collegiate Church in Manhattan for her wedding to David Eisenhower, on Dec. 22, 1968, in New York.

Julie planned to return to school after the wedding, a move which hadn't been possible for many first daughters and women who came before her. Three years earlier, Luci Baines Johnson very publicly dropped out of college because of a policy that forbade Georgetown University nursing students from getting married. Julie faced no such choice - a subtle sign of the changing times.

Otherwise, the soon-to-be first daughter was known for her adherence to traditional womanhood. Judith Martin, a Washington Post reporter who would go on to author the column "Miss Manners" first used the moniker of "Miss Manners" to describe Julie.

"She is a good housekeeper, and kept one of the neatest, fluffiest rooms in Baldwin House - all red and white, with a quilted white bedspread and red toss pillows," Martin wrote of Julie. "At school, where most of her friends wear Levis, she always has on a pressed blouse and jumper or skirt."

On Dec. 22, 1968, Martin was stationed in New York to cover the wedding itself. Although the couple had eschewed a White House backdrop, the day was far from low key. The ceremony took place at the iconic Marble Collegiate Church on Fifth Avenue, which was decked in fresh pine, red bows and perfect poinsettias for the pre-Christmas occasion.

Down the aisle came eight bridesmaids, all in pink chiffon dresses with short puffy sleeves that matched the ones on Julie's voluminous gown. Her dress featured a high-neck lace collar, pearl embroidery and a cathedral train. It reportedly cost $2,000.

Nixon accompanied Julie down the aisle, and as he gave her away, she unexpectedly kissed his cheek.

"This impulsive, spontaneous gesture brought tears to the eyes of many in the church - including mine," Nixon wrote in his autobiography.

For the reception, the Plaza Hotel played host to 500 guests, including incoming Cabinet members, Vice President-elect Spiro T. Agnew and Attorney General-designate John Mitchell (a decade away from his post-Watergate prison stint). The couple danced to an orchestra rendition of "Edelweiss" from "The Sound of Music" before cutting into a six-tier cake with a monogrammed Tiffany & Co. knife.

"Like most brides, the bride had trouble with her new name," wrote Dorothy McCardle, one of Martin's Washington Post colleagues. "When someone called her Mrs. Eisenhower, she looked around with a puzzled expression and smiled and exclaimed, Who, me?" 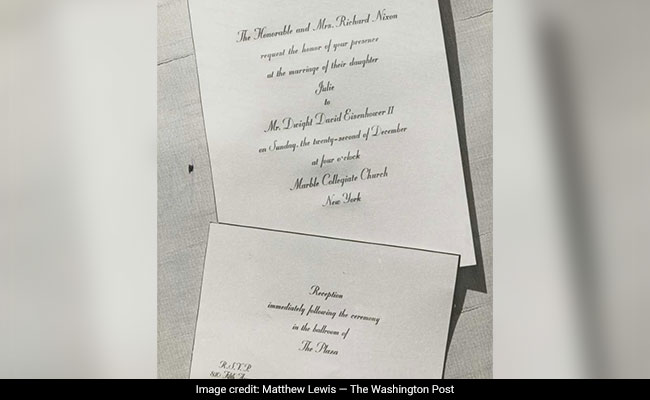 But the Washington Post reporters couldn't actually see Julie Nixon in the ballroom, at first. Although they were given credentials to attend the reception, when they arrived, they found that Nixon's transition team had quarantined reporters into a room outside of the ballroom. A press secretary informed them they would not be allowed into the reception; instead, she would give them occasional updates, and they were to write the story as if they had been there.

Martin was appalled - and still is today.

"If you want a private wedding, don't issue credentials, and don't tell us to lie about it," Martin said in a recent interview.

Rather than go along with the edict, Martin and her colleague Myra McPherson snuck down a back stairwell, slipped their wedding rings into their purses and emerged with the rest of the guests, pretending to be friends of Julie's.

"We grabbed these nice young men - who in the dim light thought we were college girls - to dance with so we could get around the room," Martin recalled. "We put our heads down when we saw somebody who would know who we were."

Once the pair was recognized, they fled. And then they wrote an article about the Nixon administration's restrictions on the press at the event - a subtle foreshadowing of what was to come.

Three years later, in 1971, Julie's younger sister Tricia was set to be married at the White House. As depicted in the movie "The Post," White House Chief of Staff H.R. Haldeman called Publisher Katherine Graham to demand the paper send someone other than Martin to cover it. Executive Editor Ben Bradlee did not oblige.

Soon, the Nixon presidency would be in an all-out battle with the press, and Julie Nixon, who had avoided the political fray for her wedding, became one of her father's fiercest defenders. Many admired her grace and grit in the face of scandal; others agreed with the writer Nora Ephron, who famously described the eldest Nixon daughter as "a chocolate-covered spider."

Julie continued to defend her father's legacy long after his presidency ended. She has helped lead his foundation, advocated for his library to be a part of the National Archives system and released statements calling out perceived inaccuracies in media characterizations of his life, including Ken Burns's 2017 documentary, "The Vietnam War."

And yet, Julie never went into politics herself. Neither did her husband. A couple that seemed bred to become a political force instead spent their 50 years of marriage quietly writing books, teaching, serving on charity boards and raising their children in the Philadelphia suburbs.

"I'm not recognized here at all," Julie told People magazine in 1986. "I meet people through my child's nursery school instead of at a White House dinner. It's more normal."

Though she gave interviews in conjunction with the release of her books, Julie has continued to avoid the press. Through a spokesman at the Nixon Foundation, the couple declined to participate in this story. And this reporter has no plans to sneak into their 50th anniversary party.