Jimmy Lai is accused of colluding with foreign countries by calling on overseas governments to sanction Hong Kong and China in response to the crackdown on pro-democracy activism in the city. 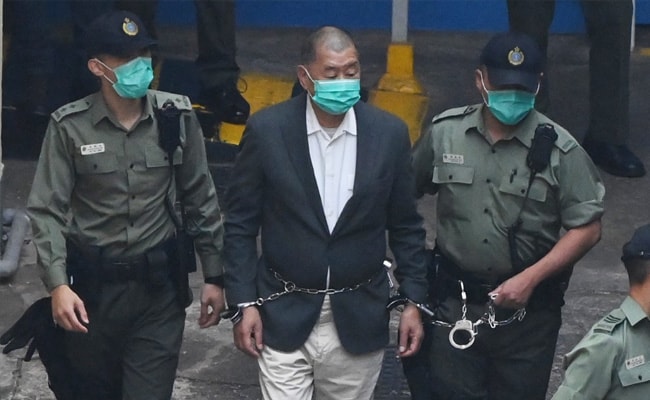 Jimmy Lai, dressed in a suit and calm throughout, said he acknowledged the charge.

Hong Kong media tycoon and Beijing critic Jimmy Lai appeared in court Saturday to face a charge under a sweeping new national security law that see him jailed for life.

He is accused of colluding with foreign countries by calling on overseas governments to sanction Hong Kong and China in response to the crackdown on pro-democracy activism in the city.

Lai, 73, is the most high-profile figure charged under the law, which has targeted the city's pro-democracy movement but brought a semblance of calm to the finance hub after months of often-violent protests.

The police's new national security department charged him Friday with "collusion with a foreign country or with external elements to endanger national security" under the tough law imposed on the city by Beijing. The offence carries a penalty of up to life imprisonment.

The prosecutor told the court that Lai broke the security law between July 1 and December 1 by requesting that a foreign country or institution, organisation or individual "impose sanctions or blockade, or engage in other hostile activities" against Hong Kong and China.

Lai, dressed in a suit and calm throughout, said he acknowledged the charge.

Chief Magistrate Victor So, one of the six magistrates hand-picked by the city's pro-Beijing leader Carrie Lam to handle national security cases, said the prosecution needed time to further investigate.

This included examining more than a thousand messages from Lai's Twitter accounts, a number of media interviews the tycoon gave, and a number of overseas visits in relation to calls for US sanctions against Hong Kong and China.

After the hearing, Lai's supporters shouted words of encouragement, which he returned with a heart-shape hand gesture.

It reported that the police allegations said Lai had followed 53 people on Twitter including US Secretary of State Mike Pompeo, Taiwan President Tsai Ing-wen and a member of Britain's Conservative Party, Luke de Pulford, and that he had 120,000 followers including Tiananmen student protest leaders Wang Dan and Wuer Kai Xi.

The report also said the prosecution accused Lai of publishing remarks that targeted China and Hong Kong via Twitter after the security law came into force.

It also said Lai had given interviews to CNN, Fox News, Bloomberg, the New York Times, BBC Chinese and other foreign media calling for support from the West and sanctions on China.

Lai's Apple Daily is unashamedly pro-democracy and fiercely critical of authorities. Police raided the paper's headquarters in August and arrested a string of senior company figures, including Lai.

Last week, he was denied bail and remanded in custody until April after being charged with fraud. He was set to apply for bail on that charge at the High Court on Tuesday.

He was denied bail on Saturday.

The controversial security law also allows some trials to be heard behind closed doors, or even be tried in mainland China.

Beijing's clampdown on Hong Kong, especially prominent political figures, has dramatically accelerated since it imposed the security law in June.

Opposition lawmakers have been disqualified from the legislature and leading democracy activists have been jailed.

Two dozen people have been arrested under the law and four have so far been officially charged.