The two leaders met in the backdrop of rising trade tensions between the United States and European Union, of which Netherlands is a member. 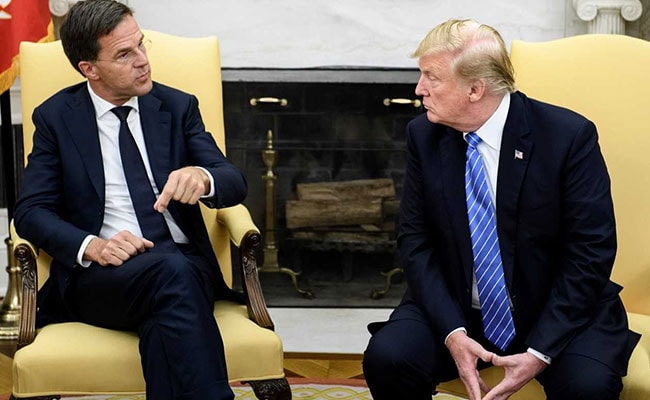 Most state leaders would avoid saying "no" to President Donald Trump in a room full of reporters. But Dutch Prime Minister Mark Rutte isn't like most leaders.

Rutte, a liberal straight-shooter known for mopping up his own coffee spills and cycling to the royal palace in Amsterdam, met with Trump amid rising trade tensions between the United States and the European Union, of which the Netherlands is a member. In a five-minute news conference in the Oval Office, Rutte spoke significantly less than Trump. But when the Dutch prime minister interjected, he made himself heard.

About a minute into his remarks, Trump suggested that leaving the trade dispute unresolved could still be "positive." Rutte responded by raising his eyebrows, laughing and cutting in to say, "no." When Trump kept going, Rutte said while smiling to reporters: "It will not be positive. We will work something out."

Trump: We are very close to making some very good trade deals. Fair trade deals - I didn't want to say "good," I want to say "fair." Fair trade deals for our taxpayers and for our workers and our farmers. And a lot of good things are happening. I think the E.U., we're going to be meeting with them fairly soon and we want to see if they can work something out. That will be good, and if we do work it out, that'll be positive, and if we don't, it'll be positive also.

Trump: Well, just think about those cars that pour in here-

Rutte: It's not positive. We have to work something out.

Trump: It'll be . . . it'll be positive. But again, Mr. Prime Minister, thank you very much for being here.

Rutte: It's good to be here.

While Rutte's concise interjection tickled many in the Netherlands, his remarks belie a deeper tension growing between the U.S. and its European allies.

In May, Trump commissioned an investigation by the Commerce Department into the state of automobile imports into the U.S., prompting European Union leaders to send Trump an 11-page document last Friday threatening to levy taxes on $290 billion in U.S. goods. Trump responded by tweeting that the U.S. would impose a 20 percent tax on all European cars if the E.U. did not remove existing tariffs, and then saying in a televised interview with Fox News that the E.U. is "as bad as China" when it comes to trade.

The Netherlands is the sixth-largest economy in the E.U., and the fifth-largest exporter of goods in the world, according to data from market research company Statista. The country has a lot at stake in the face of U.S. protectionism, and this is not the first time Rutte has made that clear. In March, the Dutch leader told reporters that Trump's decision to impose a global steel and aluminum tax was "very disappointing," adding that the E.U. had "to make clear we are prepared to take countermeasures."

Rutte, who has now served as prime minister for two terms, is also reportedly planning to run for the position of European Council president in 2019, when current President Donald Tusk is poised to step down. If Rutte is serious about representing the European Council, he will need to show that he can hold his own with Trump. On Monday, the Dutch leader did just that with a concise, resounding "No."