Voting by mail has been around for decades for Americans, and is used regularly by hundreds of thousands of diplomats and military service members away from home at election time. 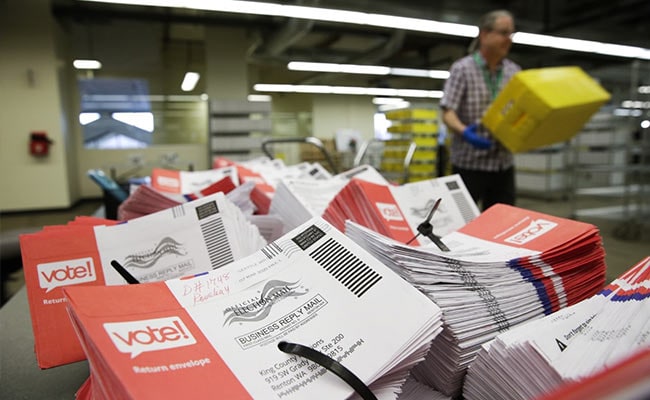 Voting by mail is already fully implemented in five US states, and partially in most other states.

Worries that the COVID-19 threat will persist into the November election is driving a push for US voters to vote by mail nationwide, but the biggest opponent is President Donald Trump, who admits it threatens his Republican Party.

The shortage of by-mail ballots and the coronavirus threat appeared to significantly depress the Wisconsin turnout, and threatens coming primaries for the November presidential and congressional races.

But Trump repeatedly tore into the idea of allowing all voters to post their ballots this week, making unsupported claims that the practice leads to massive election fraud.

"Mail ballots are a very dangerous thing for our country because they're cheaters," he said Tuesday.

"You get thousands and thousands of people sitting in someone's living room signing ballots all over the place....You can look at the statistics. There is a lot of dishonesty going along with mail-in voting, mail-in ballots."

The White House has not supported those claims with evidence.

But Trump -- who himself voted by mail in the last Florida election -- openly indicated his real concern: that making it easier to vote would bring out more voters, who he believes would support Democrats.

"Republicans should fight very hard when it comes to state wide mail-in voting....for whatever reason, doesn't work out well for Republicans," he said in a follow-up tweet.

Voting by mail has been around for decades for Americans, and is used regularly by hundreds of thousands of diplomats and military service members away from home at election time.

It is already fully implemented in five states, and partially in most other states.

In the 2016 election that saw Trump win the White House, 24 percent of votes were cast by mail; in the 2018 mid-term Congressional polls, the figure rose to 26 percent. In five states it was over half.

"Much of the country now votes by mail," said Matthew Harwood of the Brennan Center for Justice.

"Restricting who can vote by mail this year at best makes voting unnecessarily difficult, and at worst puts citizens at unnecessary risk of catching the coronavirus," he said.

Critics say there are too many challenges to by-mail voting, and cite high levels of problem ballots. In 2018 only 91.8 percent of the 30 million ballots returned were counted, according to a US Election Assistance Commission report.

Most of those that went uncounted were rejected for arriving too late, or had identity and eligibility problems.

But advocates say states which put more effort into the process have lower rejections, and that overall, voting by mail increases participation.

Amber McReynolds, the chief executive of the National Vote At Home Institute, says 40 percent of non-voters cite inconvenience: they cannot get away from work, or wait for hours at a polling place.

In Colorado, where she was formerly director of elections in Denver, participation has soared with by-mail voting.

"The polling place model sort of disenfranchises people on its own," she told AFP.

"We don't want people to be disenfranchised."

Mail-in voting is not exclusive. It can complement early voting and election-day voting at polling stations, making the entire election infrastructure more resilient.

But the motivation for it now is the COVID-19 pandemic.

McReynolds said local election officials around the country, Republican and Democrat, are seeking information from her group on how to implement voting by mail.

"Voters are asking for it," she said. "And a lot of election officials are very nervous after watching Wisconsin."

She said that, despite claims by Trump, fraud in mail-in voting is exceedingly low, a few hundred cases in an election with a half-million votes cast.

"It's rare, but we have caught people," she said, pointing to the case of former Colorado Republican party head Steven Curtis, who was convicted of forgery and ballot tampering after sending in the ballot of his ex-wife in 2016.

His signature on the ballot did not match hers.