The obscene gesture, captured on October 28 by AFP White House photographer Brendan Smialowski, who was riding in Trump's convoy, quickly went viral. And it has now cost the single mom her job. 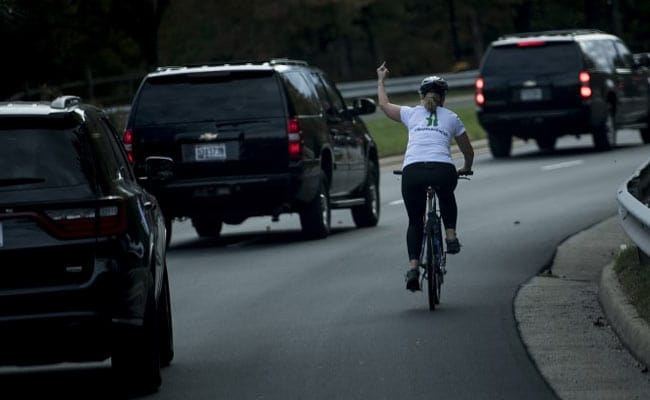 Juli Briskman, the cyclist in question, has allegedly lost her job at Akima LLC (AFP)

Washington: Juli Briskman didn't think twice when she gave President Donald Trump the finger as his motorcade passed her while she was cycling on a road near his golf club.

"He was passing by and my blood just started to boil," the Democrat mother of two, 50, told HuffPost.

But the obscene gesture, captured on October 28 by AFP White House photographer Brendan Smialowski, who was riding in Trump's convoy, quickly went viral. And it has now cost the single mom her job.

The president had gone to his Trump National Golf Club on the banks of the Potomac River, about 25 miles (40 kilometers) northwest of the White House.

Briskman lives nearby and was out for a Saturday bike ride when the convoy of black SUVs drove past.

Smialowski, a veteran of White House motorcades, said he always keeps his camera ready to shoot.

In this case, he said, Briskman "seemed to know exactly who was inside those vehicles."

After the first time the convoy passed her, she caught up again when it stopped at a red light.

"What made this particular cyclist unique was her tenacity -- once the motorcade passed her, she managed to catch back up and share her feelings again," he said.

The photo only showed Briskman from the back, unidentifiable, her left arm out and middle finger up.

It didn't take her long to realize that she was the person in the photo soon all over the internet and television.  She proudly posted it as her profile picture on her Facebook and Twitter pages.

It isn't known whether Trump saw the gesture. But it didn't please Briskman's bosses at Akima LLC, a builder that does work for the US government and military.

Three days later they told Briskman, a marketing officer, she had to go.

"They said, 'We're separating from you,'" Briskman told HuffPost.

"Basically, you cannot have 'lewd' or 'obscene' things in your social media. So they were calling flipping him off 'obscene.'"

Briskman and Akima could not be contacted early Monday for comment.

Promoted
Listen to the latest songs, only on JioSaavn.com
But the photograph remained at the top of her social media pages.