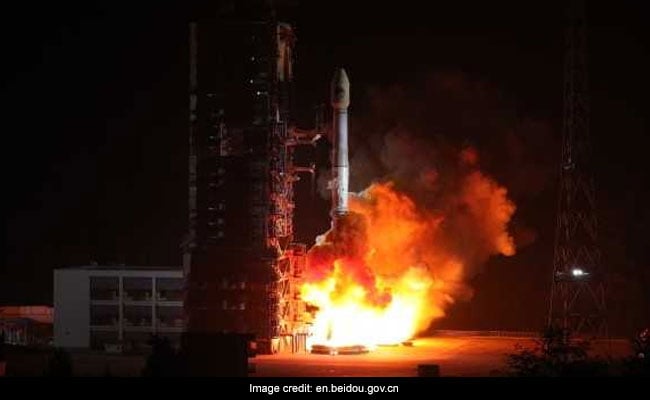 With the launch of two new BDS-3 satellites today, China will complete the basic navigation system

China has completed the deployment of its home grown BeiDou Navigation Satellite System (BDS) constellation with the successful launch of two more satellites and will start providing services to countries participating in the Belt and Road Initiative by next month, the state media reported today.

The BDS, which will rival US' Global Positioning System (GPS), will provide high-precision, reliable positioning, navigation and timing services anywhere in the world by the end of 2020, the Xinhua news agency reported.

The satellites were launched into space on a Long March-3B carrier rocket from the Xichang Satellite Launch Centre in Sichuan Province.

The satellites entered a medium earth orbit more than three hours later and will work with 17 other BDS-3 satellites already in space, the report said.

With the launch of two new BDS-3 satellites today, China will complete the basic navigation system and start to provide services for countries participating in the Belt and Road Initiative (BRI) by the end of this year, the report said.

The Belt and Road Initiative (BRI), a pet project of Chinese President Xi Jinping, is an ambitious effort to improve regional cooperation and connectivity on a trans-continental scale.

The initiative aims to strengthen infrastructure, trade, and investment links between China and some 65 other countries. It is also expected to boost Beijing's influence in these countries.

"This is a key step for BDS developing from a domestic Chinese system to a regional and then a global navigation system," said Yang Changfeng, chief designer of the BeiDou system.

China plans to launch another 11 BDS-3 satellites in the coming two years. By the end of 2020, the BeiDou system, named after the Chinese term for the Big Dipper constellation, will become global, and provide high-precision, reliable positioning, navigation and timing services anywhere in the world, the report said.

Altogether 18 BDS satellites have been sent into space from the Xichang Satellite Launch Center in southwest China's Sichuan Province in 2018.

Chi Jun, head of the BDS-3 satellite team from the China Academy of Space Technology (CAST), said that this year has seen the most intensive launch of the BDS satellites.

"We improved our work efficiency by reforming the management process. The number of satellite staff at the launch center has been reduced by nearly half, and the testing time before launch has been shortened by nearly a third," said Chi.

In the CAST production base in Beijing, several BDS satellites are being manufactured at the same time, the report said.

"We try to improve intelligent manufacturing capability, and cut down production times. Construction of the BDS-3 system has accelerated," Chi said.

Once the BDS is fully deployed, it will be the fourth global satellite navigation system after the US GPS system, Russia's GLONASS and the European Union's Galileo.

India too, is building its navigational system called the Indian Regional Navigation Satellite System (IRNSS), with an operational name of NAVIC.