President Reuven Rivlin mandated Benjamin Netanyahu to try to form the government after his initial attempts at negotiating a unity deal. 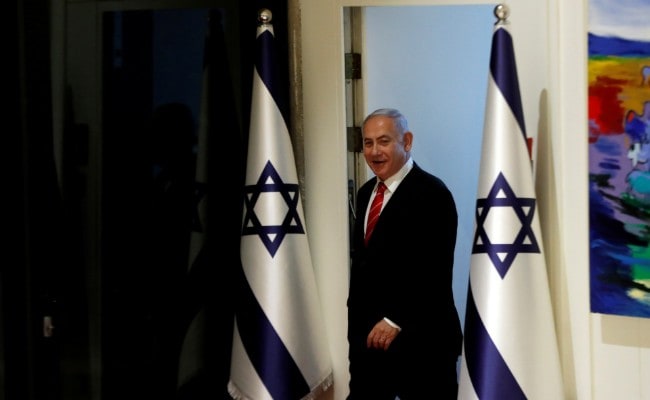 Israel's president tasked Prime Minister Benjamin Netanyahu with forming a new government Wednesday after last week's deadlocked elections, but the premier faces a tough battle in negotiating a coalition deal to keep him in power.

President Reuven Rivlin mandated Netanyahu to try to form the government after his initial attempts at negotiating a unity deal between the prime minister and his main challenger Benny Gantz failed.

Netanyahu again called for a unity government when accepting the mandate from Rivlin, but the two sides appear a long way from a compromise.

"Everyone understands that there won't be another opportunity," Netanyahu said from Rivlin's residence.

"That's why I will do everything in my power to establish it with joint leadership."

Gantz however criticised the negotiating tactics Netanyahu's Likud had used so far and reiterated that his own Blue and White would not be part of a government with a prime minister facing indictment for serious crimes.

Netanyahu faces the possibility of a corruption indictment in the weeks ahead, pending a hearing set for early October.

Blue and White members have said he must deal with his legal issues and allow Gantz to take the post of prime minister, at least initially.

"Blue and White led by me will not agree to sit in a government with a leader against whom stands a severe indictment," Gantz said in a statement.

Rivlin's announcement followed a joint meeting between the president, Netanyahu and Gantz, their second since the September 17 election.

In Rivlin's remarks, the president said he had so far been unable to have the two work out a unity deal, which he has repeatedly said is needed to form a stable government.

Netanyahu will now have 28 days to form a government, with a possible two-week extension.

If all attempts fail, Rivlin can then assign the task to someone else.

Netanyahu pledged Wednesday to let Rivlin hand the mandate to someone else if he does not succeed -- rather than move toward new elections as he did when he failed to form a coalition following April polls.

Final results from September 17 voting gave Gantz's centrist Blue and White 33 seats, ahead of right-wing Likud's 32 out of a total 120 seats in the Knesset, Israel's parliament.

Neither has a clear path to a majority coalition.

Netanyahu received the endorsement of 55 members of parliament for the post of prime minister after the election, while Gantz received 54.

Ten of the parliament members endorsing Gantz however are from Arab parties and have said they will not serve in a government with the ex-military leader.

A rotation agreement has been floated, but there has been disagreement over who would lead it first.

Chief negotiators for Likud and Blue and White met Tuesday, but emerged afterwards with only vague statements.

Netanyahu is Israel's longest-serving prime minister and has shown no sign of willingly giving up the post he has held for a total of more than 13 years.

The timing in a rotation agreement is especially important for Netanyahu.

A prime minister does not have to step down if indicted -- only if convicted with all appeals exhausted -- while other ministers can be forced to do so when charged.

Rivlin has pledged to do all he can to avoid a third election in a year's time after April's inconclusive polls.

"While the elections highlighted the divisions within Israeli society -- Jewish and Arab, religious and secular -- it is now time to work together on building a shared vision for our common future," Rivlin said at a Wednesday reception for foreign diplomats marking the Jewish New Year.

"I therefore believe that the right path for the state of Israel today is to build as broad a governing coalition as possible."

Netanyahu has highlighted the fact that he has more support from smaller parties in parliament and pledged not to abandon them in a coalition deal.

Gantz says his party is the largest and he should be in the lead.

Separately, Israel's Arab parties, running together under the Joint List alliance, finished as the third-largest force in parliament with 13 seats.