The boat was reportedly carrying some 60 passengers when the incident occurred on a lake in the town of Bijoynagar, local government administrator Hayat-ud-Doula Khan said. 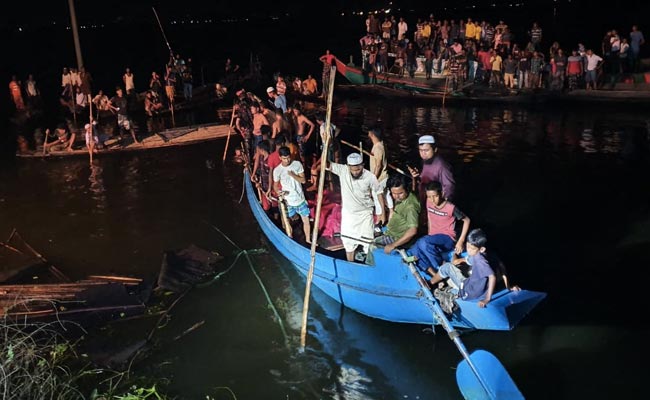 Police said at least seven people were taken to a local hospital after they were rescued from the boat.

At least 21 people were killed and dozens remain missing as a boat packed with passengers and a sand-laden cargo ship collided Friday in a lake in eastern Bangladesh, officials said.

The boat was reportedly carrying some 60 passengers when the incident occurred on a lake in the town of Bijoynagar, local government administrator Hayat-ud-Doula Khan said.

The cargo ship's steel tip and the boat collided, causing the passenger vessel to capsize, he said.

"We have recovered 21 bodies including nine women and six children so far," he told AFP, adding that the toll would likely rise.

Local fire service spokesman Taufiqul Islam said divers were searching the scene of the accident for more bodies, and that reinforcements had been called in from neighbouring towns. Locals also joined the rescue efforts.

Police said at least seven people were taken to a local hospital after they were rescued from the sunken boat.

Survivor Akhi Akter said she was travelling with her son, mother-in-law and brother-in-law in the passenger boat.

"When the accident occurred, I managed to swim back to the bank. But the rest of my relatives are still missing," she said tearfully.

Local authorities have formed a probe committee to investigate the accident.

The maritime accident was the latest in a string of similar incidents in the south Asian country.

In April and May, 54 were killed in two separate boat capsizing accidents.

Experts blame poor maintenance, lax safety standards at shipyards and overcrowding for many of the accidents.

Vessels transporting sand sit low in the water and can be hard to see in choppy conditions, particularly in poor lighting.

In June last year, a ferry sank in Dhaka after it was hit from behind by another ferry, killing at least 32 people.

In February 2015, at least 78 people died when an overcrowded ship collided with a cargo boat.