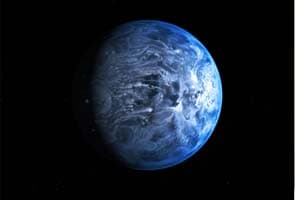 Astronomers said on Thursday they had found another blue planet a long, long way from Earth -- no water world, but a scorching, hostile place where it rains glass, sideways.

Using the Hubble Space Telescope, scientists from NASA and its European counterpart, ESA, have for the first time determined the true colour of an exoplanet, celestial bodies which orbit stars other than our own Sun.

They concluded that HD 189733b, a gas giant 63 light-years from our own planet, was a deep cobalt blue, "reminiscent of Earth's colour as seen from space."

"But that's where the similarities end," said a statement.

This planet orbits very close to its host star and its atmosphere is heated to over 1,000 degrees Celsius (1,832 degrees Fahrenheit).

The planet is one of the nearest exoplanets to Earth that can be seen crossing the face of its star, and has been intensively studied by Hubble and other telescopes.

"Measuring its colour is a real first -- we can actually imagine what this planet would look like if we were able to look at it directly," said Frederic Pont of the University of Exeter, who co-wrote the paper in Astrophysical Journal Letters.

Pont and a team measured how much light was reflected off the planet's surface, a property known as albedo, in order to calculate its colour.

The blue comes not from the reflection of a tropical ocean, as in Earth's case, but a hazy, turbulent atmosphere believed to be laced with silicate particles -- the stuff of which glass is made.

HD 189733b is an example of a "hot Jupiter" planet, similar in size to the gas giants in our own Solar System, but closer to their parent star.

"It's difficult to know exactly what causes the colour of a planet's atmosphere, even for planets in the Solar System," said Pont.

"But these new observations add another piece of the puzzle over the nature and atmosphere of HD 189733b. We are slowly painting a more complete picture of this exotic planet."

A total of 723 confirmed extrasolar planets have been found since the first was spotted in 1995, according to a tally kept by the website http://exoplanets.org.

Promoted
Listen to the latest songs, only on JioSaavn.com
So far, no exoplanet spotted has the potential to be a home away from home; a rocky planet that orbits in a balmy zone, enabling water to exist in liquid form and thus nurture life as we know it.