The two leaders held a one-on-one meeting after Mr Ghani arrived in Islamabad on a two-day visit to strengthen bilateral relations and boost peace process in Afghanistan. 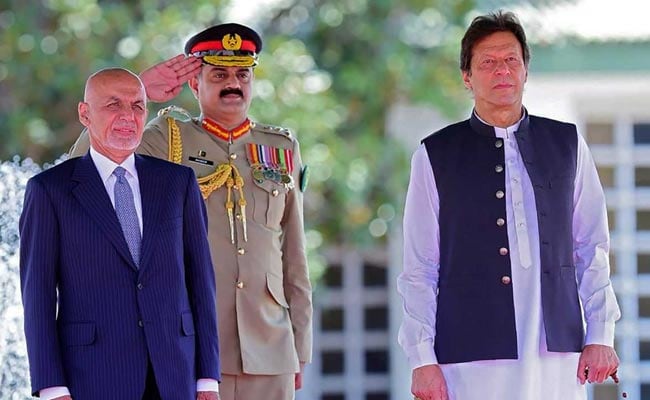 This is President Ashraf Ghani's third visit to Pakistan.

Pakistan Prime Minister Imran Khan and Afghanistan President Ashraf Ghani on Thursday discussed peace efforts in the war-torn country and agreed to open a new chapter of friendship and cooperation between the two neighbours.

The two leaders held a one-on-one meeting after Mr Ghani arrived in Islamabad on a two-day visit to strengthen bilateral relations and boost peace process in Afghanistan.

"The new chapter of friendship between Pakistan and Afghanistan would be based on mutual trust and harmony for the benefit of the two peoples and countries and for advancing the cause of peace, stability and prosperity in the region," a statement issued by Mr Khan's office said.

Relations between Islamabad and Kabul have remained tense after several terrorist attacks in Afghanistan in which Pakistan-based terror groups were found involved.

Pakistan has also accused Afghanistan of fomenting trouble in the country.

Mr Khan affirmed that Pakistan remain committed to bring about a qualitative transformation in Pakistan-Afghanistan relations as part of his vision of a "peaceful neighbourhood".

The two leaders agreed on the importance of crafting a forward-looking vision of Pakistan-Afghanistan relations.

Reaffirming Pakistan's commitment to support the Afghan peace process as a shared responsibility, Mr Khan underlined that an Afghan-led and Afghan-owned peace process was the only viable option to end decades-long conflict in Afghanistan.

In this regard, Pakistan supported a result-oriented intra-Afghan dialogue, Mr Khan said.

The Prime Minister underscored Pakistan's respect for the sovereignty and territorial integrity of Afghanistan and its commitment to stand by the Afghan people at this crucial juncture.

The two sides agreed that enduring peace in Afghanistan would bring rich economic dividends to both the countries.

They reaffirmed their commitment to work together to broaden and deepen bilateral trade, streamline transit trade, and strengthen efforts for connectivity.

The two leaders also stressed on the need for early completion of major energy connectivity projects such as Central Asia-South Asia (CASA 1000) electricity transmission line and Turkmenistan-Afghanistan-Pakistan-India (TAPI) gas pipeline, which would bring long-term economic benefits to the countries involved.

During the meeting, they also agreed to optimally utilise the existing mechanisms - including Afghanistan-Pakistan Transit Trade Coordination Authority (APTTCA) and Joint Economic Commission (JEC) - to remove difficulties in transit and bilateral trade and to explore new possibilities of mutually-beneficial economic and commercial relations.

"There was also an exchange of views on regional issues. The Prime Minister shared his vision for peace, progress and prosperity in South Asia," the statement said.

Officials privy to the details of the meeting told news agency Press Trust of India that both leaders emphasised that the commonalities of religion, culture and history were source of strengthen between the two nations.

They said that Mr Khan told his guest that "Pakistan has also supported an Afghan-owned and Afghan-led solution to the conflict".

The Prime Minister also hosted a Banquet Luncheon in honour of the visiting Afghanistan President and his entourage.

Earlier, Mr Ghani landed at Nur Khan airbase and was received by Adviser on Commerce Abdul Razak Dawood and other officials. The visiting dignitary was also given a twenty one gun salute.

He was taken to PM House and presented guard of honour.

Foreign Office said that the Afghan President is accompanied by a high level delegation including ministers, advisers, senior officials and businessmen.

President Ghani will also travel to Lahore where he will participate in a business forum attended by business representatives from both the countries.

This is President Ghani's third visit to Pakistan and follows the recently held first review session of the landmark Afghanistan-Pakistan Action Plan for Peace and Solidarity.

He is visiting at an important time when efforts for peace in Afghanistan have entered a crucial phase, according to officials.

It is believed that Pakistan can play a key role along with other players in making the talks successful.