361 Dead In China Due To Coronovirus, Opens 1,000-Bed Hospital In Wuhan

On Wednesday, another 1,300 bed makeshift hospital will be opened adjacent to it. 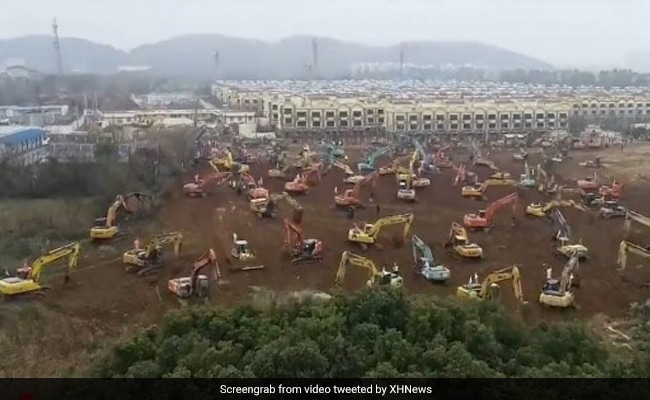 Among Sunday's deaths, 56 were reported from Hubei Province, the epicentre of the virus outbreak

China on Monday opened a 1,000-bed hospital built in record nine days in Wuhan city, the epicentre of the coronavirus, and started clinical trials for a drug to treat the virulent virus as the death toll in the outbreak soared to 361, with 17,238 confirmed cases.

A noted Chinese health expert Zhong Nanshan said that based on the fresh evidence, the novel coronavirus which is spreading rapidly in China and the world may reach its peak in the next 10 to 14 days, contrary to earlier estimates of climaxing sooner.

This means that the cases would drastically increase in the next two weeks before slowing down.

The death toll in China's coronavirus epidemic soared to 361 with 57 deaths on Sunday while the number of confirmed cases climbed to 17,238, Chinese health officials announced on Monday.

Among Sunday's deaths, 56 were reported from Hubei Province, the epicentre of the virus outbreak, and one from southwest China's Chongqing, the commission said.

The Philippines already reported the first overseas death of the virus while 148 cases have been reported from abroad. India has reported three cases of the coronavirus, all of them in Keralites who returned from Wuhan.

On Wednesday, another 1,300 bed makeshift hospital will be opened adjacent to it. Together, they will open up 2,300 bed hospitals exclusively to treat the coronavirus patients.

The new facility will ease the shortage of beds in the city resulting from an increasing number of patients infected with the virus, official media reported.

Medical personnel from the People's Liberation Army will take over the new Huoshenshan Hospital.

Official media publicised the construction of the hospitals in tearing hurry as major strength of the ruling Communist Party of China's ability to deal with such epidemics.

Also, China has begun clinical trials to test a drug to treat the patients of the coronavirus which till now has no cure. Currently, patients are being treated with a combination of antivirals and other measures, as scientists race to find a vaccine.

Some reports said drugs to treat HIV too was being tried to treat the patients.

The experimental antiviral drug, Remdesivir to be tested in field trials is developed by US-based Gilead Sciences, is aimed at treating infectious diseases such Ebola and SARS, South China Morning Post reported.

It was given to the first US patient last week - a 35-year-old man whose condition appeared to improve within a day, it said. China''s National Health Commission on Monday said the drug trials were being carried out at multiple hospitals in the central city of Wuhan.

Some 270 patients will take part in the study, the Post quoted China''s thepaper.cn as saying.

Zhong Nanshan, also an academician of the Chinese Academy of Engineering, said current research has shown the virus originated from bats, but whether there are more intermediate carriers between bats and humans requires further investigation.

Although there is no effective cure yet, there are at least seven drugs targeting the virus'' genetic material going through various stages of clinical trials, he told the official Xinhua News Agency. A vaccine is also in the works, though it requires more time to reach clinical application.

"We have learned from the successful therapy of SARS and established a set of effective treatment plans," he said.

"And with the help of various life-support measures we have ensured the recovery success rate of patients," he said. The average incubation period of the virus is around five days, with fever being the most common symptom of the virus, he said.

The novel coronavirus epidemic has triggered a sharp increase in demand for masks for citizens and protective clothing for medical workers. Companies have been mobilised to run at full capacity to produce these high-demand materials.

Meanwhile, China accused the US on Monday of spreading "panic" in its response to the deadly coronavirus, including imposing a ban on Chinese travellers.

It follows the US decision to declare a public health emergency and deny entry to foreign nationals who had visited China in the past two weeks.

The World Health Organisation said it was partnering with Google to prevent the spread of misinformation about the new coronavirus.