A United Nations High Commissioner for Refugees spokesman said that, in addition to the estimated 150 people dead at sea, 150 people were rescued and returned to Libya 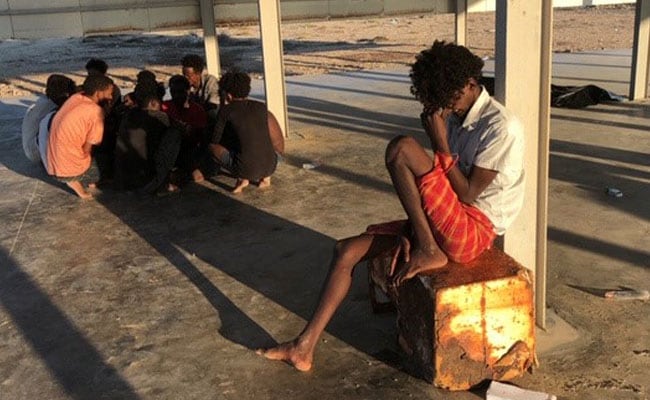 The United Nations' refugee agency said Thursday that as many as 150 people are feared dead in a shipwreck off the coast of Libya, potentially marking the deadliest migrant disaster in the Mediterranean this year.

Libya has long been a major intersection for migrants heading toward Europe in rickety boats. But the risks of taking that journey and of staying in Libya have recently increased - with Europe working to scale back rescue operations in the Mediterranean and Libya seeing its most serious fighting since 2011.

A United Nations High Commissioner for Refugees spokesman said that, in addition to the estimated 150 people dead at sea, 150 people were rescued and returned to Libya.

"The worst Mediterranean tragedy of this year has just occurred," Filippo Grandi, the U.N. high commissioner for refugees, wrote on Twitter, adding that migrants must be given safe pathways out of Libya "before it is too late for many more desperate people."

The Libyan coast guard - rebuilt with European Union and Italian funding - works to intercept migrants and return them to Libya, despite protests from advocates that survivors should not be returned to a conflict zone. In Libya, migrants say they are often detained in brutal conditions and subject to rape, torture and slavery.

On July 2, 44 people were killed by an airstrike at a migrant detention center in Libya, an event the United Nations described as a possible war crime.

The overall number of migrants heading toward Europe from the Middle East and Africa has plummeted from the highs in 2015 and 2016. But the issue has remained politically potent, particularly as far-right leaders have gained influence in key parts of Europe and restricted new arrivals.

In Italy, one of the traditional first-arrival spots, Interior Minister Matteo Salvini last year closed ports to migrant rescue vessels, and the country has passed laws that fine boat captains and owners who defy orders and enter Italian territory.

On numerous occasions, boats that have rescued migrants from their flimsy dinghies have found themselves caught in weeks-long standoffs, as European nations negotiate over how to distribute the migrants.

Is the violence in Libya having any effect on migration?

In the spring, when renegade commander Khalifa Hifter attempted to seize Libya's capital, the country's U.N.-recognized prime minister warned in an interview with an Italian newspaper that hundreds of thousands of migrants might be ready to flee.

But the reality has been far less dramatic. Crossings have ticked up slightly over the past month, but departures from Libya remain low in comparison with prior years - and the Libyan coast guard, even amid the fighting, has continued its work.

Migration experts say it is unclear why migration out of Libya hasn't spiked. But they say some of the militia groups that handle trafficking could be caught up in fighting. Meanwhile, migrants remain in detention centers.

"There is clearly a deteriorating situation in Libya, and it is making life for refugees and migrants even more nightmarish," said Judith Sunderland, associate director for the Europe and Central Asia division at Human Rights Watch. "What we don't really know is all the dynamics on the ground and how the hostilities are affecting people's abilities to get on boats."

What happens to migrants who remain in Libya?

Libya is the hub for sub-Saharan migrants trying to reach Europe, and for many who do cross the Mediterranean, it represents the most harrowing part of the journey. During a recent interview, one Gambian migrant who'd settled in northeastern Italy broke into quiet sobs recalling his time in Libya and a friend who had died in detention there. Then, he let out two wall-shaking screams.

For years, international advocacy groups have detailed the abuses that migrants face in Libya. But last month, the United Nations went a step further, calling for migrants and refugees to be "immediately released" from the detention facilities.

The United Nations described a recent visit to the Zintan detention center, where 654 migrants were held. Those migrants, the world body said, were "severely malnourished," lacked water, and were "locked in overcrowded warehouses reeking with the smell of rubbish and waste from overflowing latrines."

The detainees reportedly received one small meal per day: 200 grams of plain pasta. A large group of detainees from Eritrea received an even smaller portion of food, the United Nations said. Thirty migrants suffering from tuberculosis had been sent to a facility closer to the front line.

"They have reportedly been sent there to die because there are no burial facilities for Christians in Zintan," the United Nations said.

For those who do cross the Mediterranean, what are the risks?

For years, the central Mediterranean - connecting Libya and Italy - has been the world's deadliest passageway for migrants. This year, 426 migrants have died making that crossing, accounting for 30 percent of global migrant deaths.

Over the past several years, Europe has drastically cut flows across the Mediterranean by equipping the Libyan coast guard and closing off other routes to the continent. Governments have also put legal pressure on groups that perform sea rescues, significantly cutting the number of nongovernmental organizations that patrol the Mediterranean. But in the meantime, for those who do attempt the journey, the risk of death is higher. In 2019, 4.6 percent of migrants crossing the central Mediterranean have died. Last year, the death rate was 3.2 percent. In 2017, it was 2.1 percent.

Early last year, a dozen groups performed migrant rescue missions in the Mediterranean. For much of this year, one or two have been operating at any time.

On Sunday, though, one of the groups that had abandoned its efforts last year - Doctors Without Borders - said it was resuming its campaign in the central Mediterranean, using a ship operated in tandem with another NGO, SOS Mediteranee.

"Politicians would have you believe that the deaths of hundreds of people at sea, and the suffering of the thousands of refugees and migrants trapped in Libya, are the acceptable price of attempts to control migration," Sam Turner, the Doctors Without Borders head of mission in Libya, said in a statement. "The cold reality is that while they herald the end of the so-called European migration crisis, they are knowingly turning a blind eye to the humanitarian crisis these policies perpetuate in Libya and at sea."