In the second episode of 'The Countdown', Dr Prannoy Roy, Shekhar Gupta, Dorab Sopariwala and NDTV's Kamal Khan and Alok Pandey analyse whether the Akhilesh Yadav-Mayawati alliance in Uttar Pradesh will have a major impact on the BJP's poll performance in the Lok Sabha elections. They will also analyse the impact the SP-BSP alliance will have had if the Congress would also have joined the alliance.

Apart from this, Dr Prannoy Roy also looks into the policies of sanitation in Uttar Pradesh under the BJP and whether free LPG cylinders, another BJP flagship policy, had a desired effect on-ground or not.

Here are the highlights for the second episode of 'The Countdown': 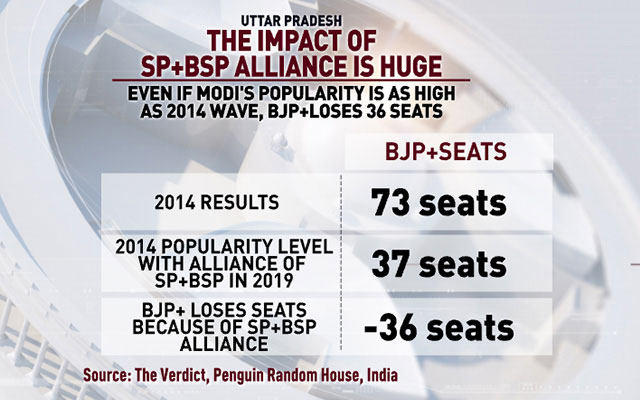 NDTV's Kamal Khan to Akhilesh Yadav: Do you think being a big party, Congress failed in uniting anti-BJP parties? Would the opposition be strengthened?

Akhilesh Yadav: Now time is lost. Now Congress must try to help other parties of the opposition. They should help Mamata Banerjee in West Bengal, Arvind Kejriwal in Delhi. In UP, the alliance is ready, so they should help us. They should learn from BJP. Despite all the pressure, BJP accepts all ministers in UP. They know if you have to come to power, you must respect other parties. They're accepting tie-ups even with less seats. They're a big party, know how to do management. They know which leader to pick and when, how big a name he is and if there are caste dimensions, they pick leaders of their castes, forget about his merits and demerits.

Dr Prannoy Roy: It's even more striking to see what would happen if Congress joined them. If Congress joined them, they would come down from 73 to 23. Congress joining them adds another 14 seats. It seems amazing the opposition cannot understand this simple arithmetic. Will they be around in 2024 if they lose this time?

Shekhar Gupta: If they lose badly this time.

Congress fighting separately is good news for the BJP. Find out how. 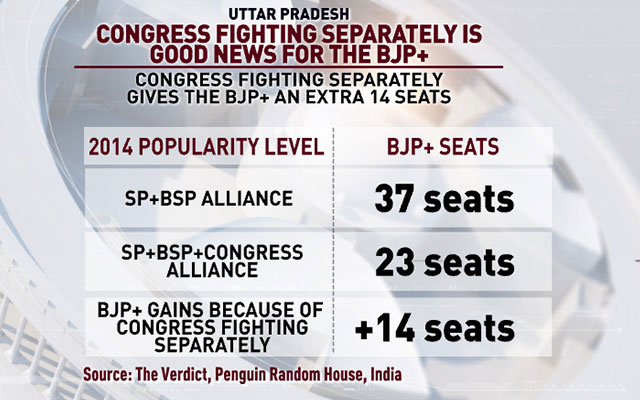 "There is an undercurrent in favour of the Congress," says senior Congress leader Pramod Tiwari

Dr Prannoy Roy: Currently what will be your forecast on the number of seats and if Congress was part of the gathbandhan, how many seats would it have been? What is the difference?

Senior Congress leader Pramod Tiwari: I would like to answer your question with two examples. In 2009 we were battling anti-incumbency, nobody thought we would win. They may be thinking the same today, but now we are not the ones fighting anti-incumbency. So I think we will get more than you predicted, there is an undercurrent in favour of the Congress. In the Congress vs BJP fight, we are going to form the next government. Yes, if there had been an alliance then maybe the margin of victory would have been far greater. Seats will be converted & won, but the margin of victory would have been very high. The BJP would have been reduced to single digits. 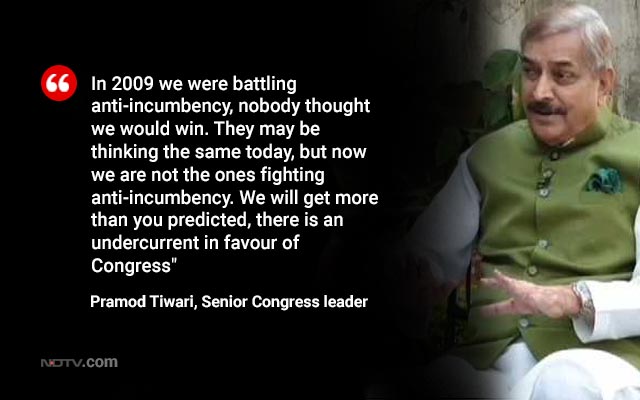 At 2017 assembly popularity levels and against a combined opposition, how will BJP perform? 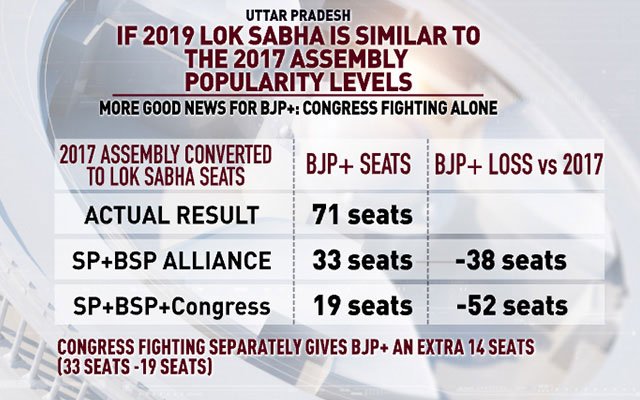 Dorab R Sopariwala: In the old days, we used to win Lok Sabha elections at 45-46%. Now we win them at 37-38%, because opposition is divided. It's arithmetic that will make the difference and not the popularity.

Dr Prannoy Roy: When you talk about a wave, you talk about 43%, but 43% with combined opposition and you're losing more than half your seats. How come BJP is so much smarter at forming alliances than the Congress?

Shekhar Gupta: Congress carries a lot of its old arrogance. There is insufficient acceptance that in large parts of its former strongholds, it has disappeared. Odisha, West Bengal, Andhra Pradesh, UP - Congress has to build the party in these states over a long period of time, find local leaders, find leaders of different castes and social groups. People won't give it back to them just because they feel sorry for them. Congress has too many leaders, and only one has the power. The other leaders have no power of attorney to sign on their behalf. In BJP, it's different. Rajbhar, Apna Dal, BJP reached out to them and conceding a lot to them.

NDTV's Alok Pandey: They were making so many noises, and yet they've just stitched together alliances.

NDTV's Kamal Khan: A lot of local leaders feel, post-Pulwama, opposition space has shrunk, issues have been diluted, focus has been shifted.

Dorab R Sopariwala: BJP has a clear objective: Win at any cost. What does it take? Give a little.

Shekhar Gupta: BJP's principle is win, as long as you're single largest party in the alliance. Look at Congress and UP. If others got nasty, they can create a real problem there.

Dr Prannoy Roy: Another policy measure is latrines at every house. Some have really liked it, others say it has not been constructed well enough. By and large it has been a positive experience.

NDTV's Kamal Khan: Do you feel that after Pulwama...before Pulwama the Congress used the phrase 'chowkidar chor hai'. They brought up issues like the Rafale deal, unemployment, stray cattle in villages causing the farmers problems. These problems are real issues for people. Do you feel that after Pulwama, these issues have ceased to matter and that there is a spirit of patriotism that makes people want to support you?

Uttar Pradesh Deputy Chief Minister Dinesh Sharma: "I look at it a different way. You have brought up the issue of stray cattle. This cattle wasn't born two days ago. This problem existed before we came to power in 2017. But nothing had ever been done about it. We gave Rs 1 crore to every town. We made cattle shelters on grazing grounds. We revived Kanji Houses (temporary cattle shelters).

We started charging center charges & taxes for excise & PWD. That money was given to take care of stray cattle. We solved the issue, that is why people stopped discussing it.

Then you talked about the Rafale issue. The Supreme Court announced its decision, and the CAG report was then released. The Congress' allegations were proved false. There is one family that is facing one court case after another. And there is another family, PM Modi's, where you will see someone filling petrol, another person fetching rations, and a third whose elderly mother uses taxis. If you compare the two, it seems like those who say 'chowkidar chor hai' are telling lies. So when you apply this logic, people understand that these issues are not the right ones."

Dr Prannoy Roy: Another key policy measure - free LPG cylinders - might be backfiring as women have to pay for the refill, about Rs 600-800. As a result they're turning back to stoves. 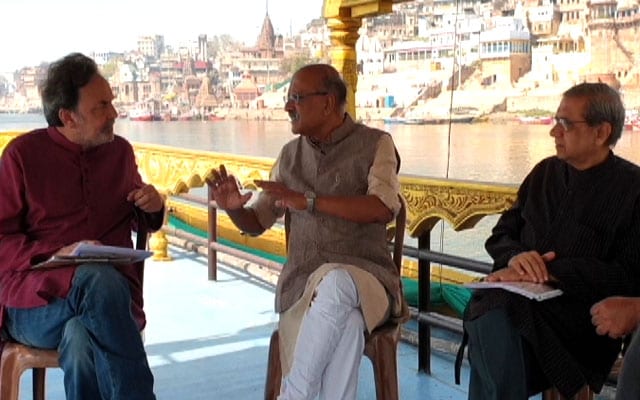 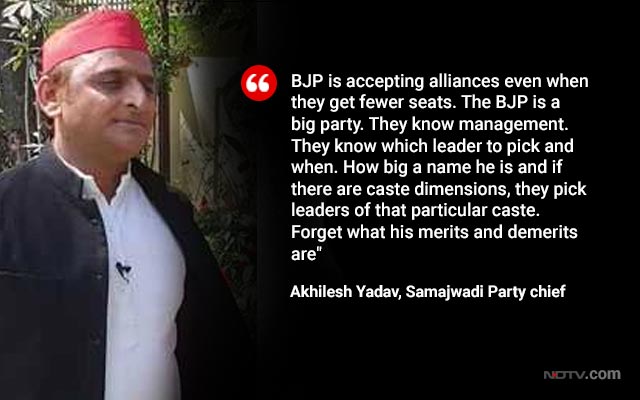 "Those who say 'chowkidar chor hai', it seems are lying": UP Deputy Chief Minister Dinesh Sharma 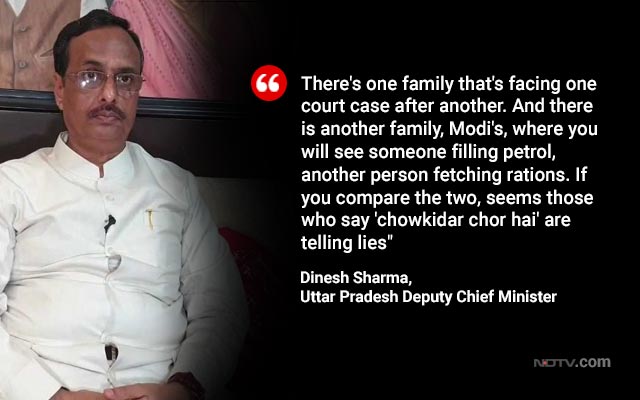 Smartphones, Scooty For Students In Congress's UP Manifesto For Women