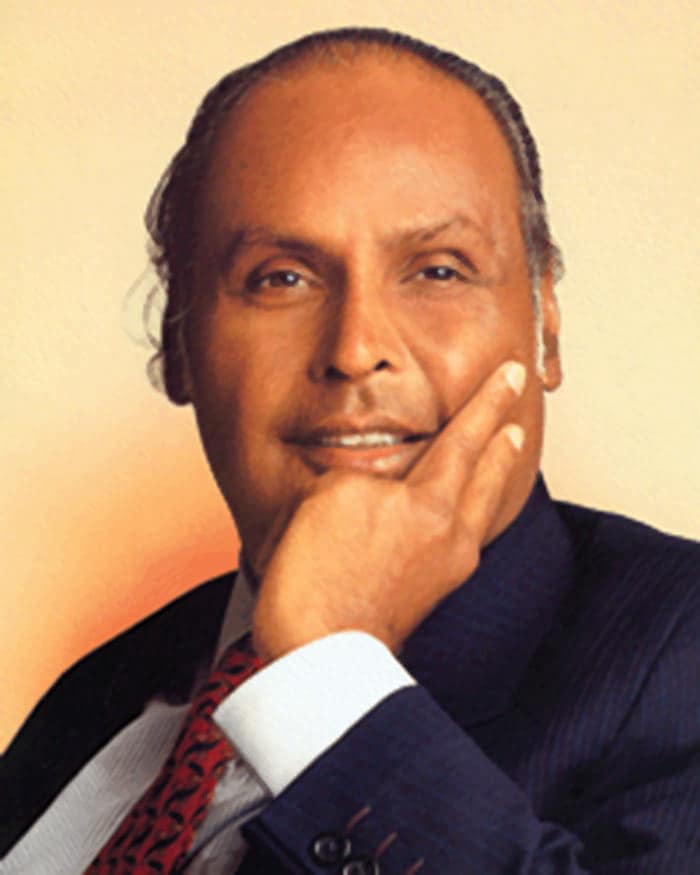 In 1949, at the age of 17, he went to Aden (now Yemen) in search of opportunity, and worked as a dispatch clerk for A. Besse. A couple of years later, the company became a distributor for Shell products and Dhirubhai was promoted to manage the company's oil-filling station at the port of Aden. It was here that he dreamed of setting up and owning a refinery, which he later realized with his petrochemicals venture. (Source: R-ADAG) 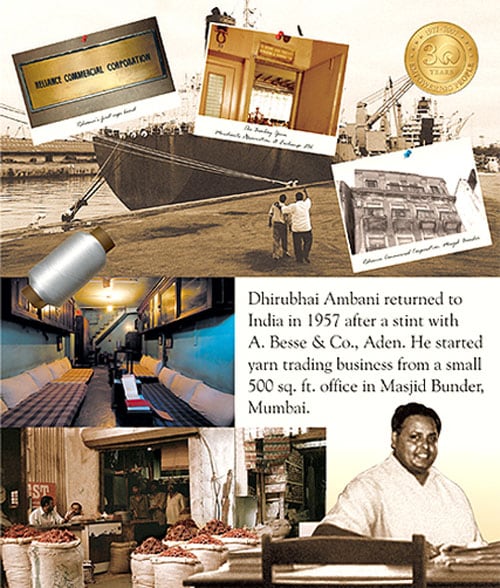 Dhirubhai Ambani eventually returned to India and started "Majin" in partnership with Champaklal Damani, his second cousin, who used to be with him in Aden, Yemen. Majin was to import polyester yarn and export spices.

In 1965, Champaklal Damani and Dhirubhai Ambani ended their partnership and Dhirubhai started on his own. (Image source: RIL website; text source: Wikipedia) 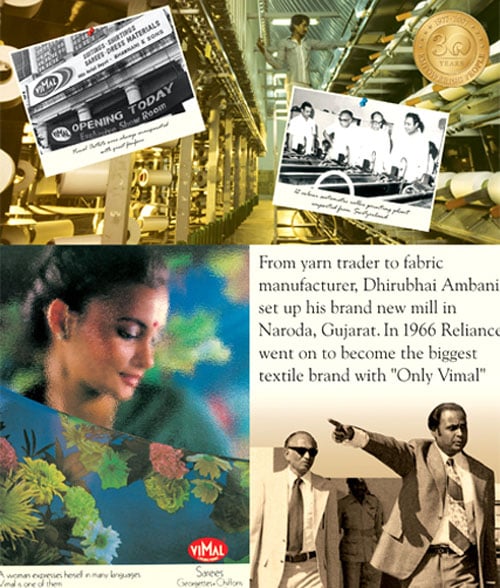 In 1962, Dhirubhai identified an emerging opportunity in yarn trading and shifted to the new business.

Three years later, he changed the name of his company to Reliance Textile Industries. In 1966, he purchased land in Naroda, Gujarat, to set up a textile mill. (Image: RIL; text source: R-ADAG) In 1977, the company went public. Dhirubhai's decision to prefer the capital markets over banks as the primary source of funding for his ambitious expansion plans, was as daring as it was unprecedented. 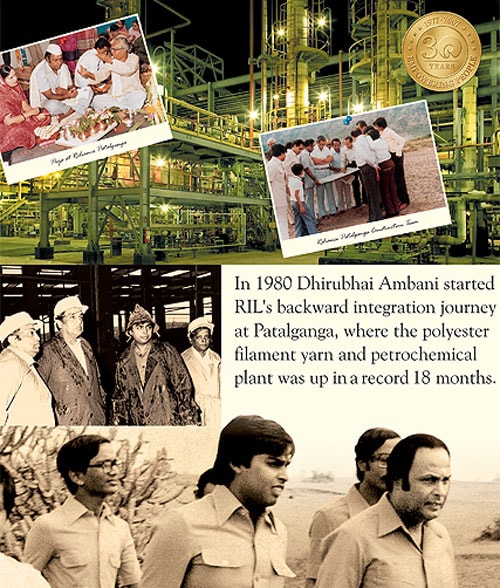 In the early 80s, he had taken the first important step in strategic backward integration for Reliance with the commissioning of the Patalganga plant which initially manufactured polyester filament yarn and polyester staple fibre. (Image source: RIL website; text source: R-ADAG) In 1991, he set up Reliance Hazira, for the manufacture of petrochemicals—the next link in the backward integration chain. At the time, Reliance Hazira represented the single largest investment made by a private sector group in India at a single location. (Image source: RIL website; text source: R-ADAG) 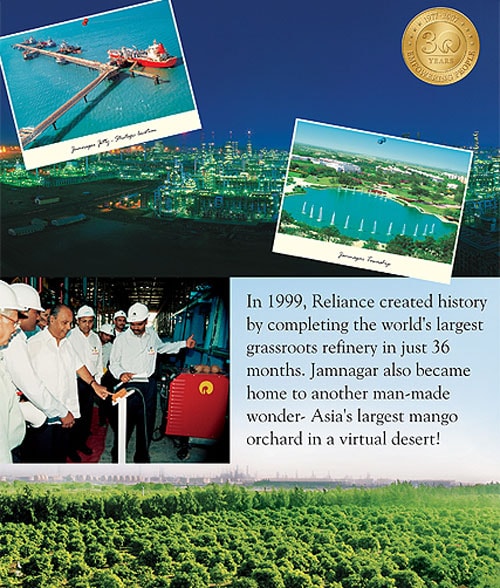 Dhirubhai had firmed up plans of setting up a massive grassroots refinery—the next big leap in his overall strategic roadmap for Reliance. Conceived as the world's largest grassroots refinery at the time, Jamnagar in Gujarat was to have an annual capacity of 27 million tonnes. In the face of formidable challenges, including a massive cyclone that flattened the project site mid-way through construction, Reliance commissioned the Jamnagar facility in 1999. (Image source: RIL website, text source: R-ADAG website) 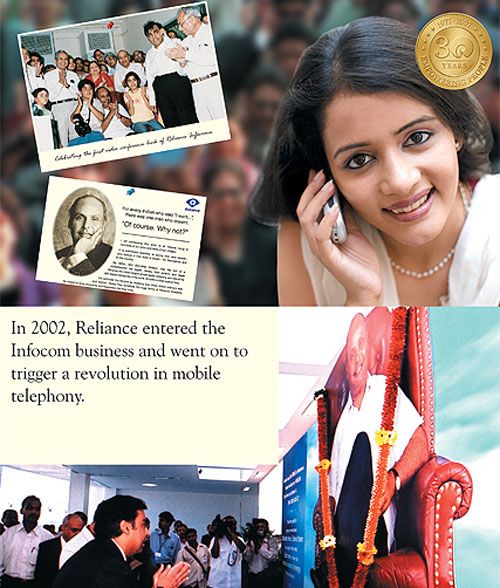 He wanted Reliance to spearhead a communications revolution that would dramatically cut down the cost of connectivity, and propel India into the digital age. His ultimate ambition: To make the cost of a phone call cheaper than that of a post card. It was therefore entirely logical for Reliance to enter the telecommunications space when the sector was opened up for private participation in the 1990s. (Image source: RIL website; text source: R-ADAG) 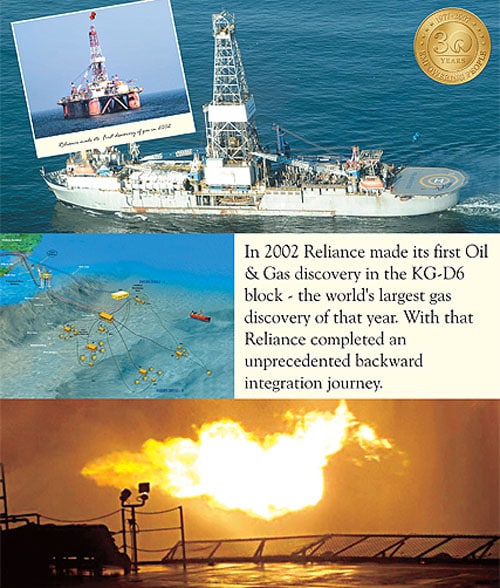 In 2002, Reliance made its first discovery of oil & gas in the KG-D6 block. (Source: RIL website) 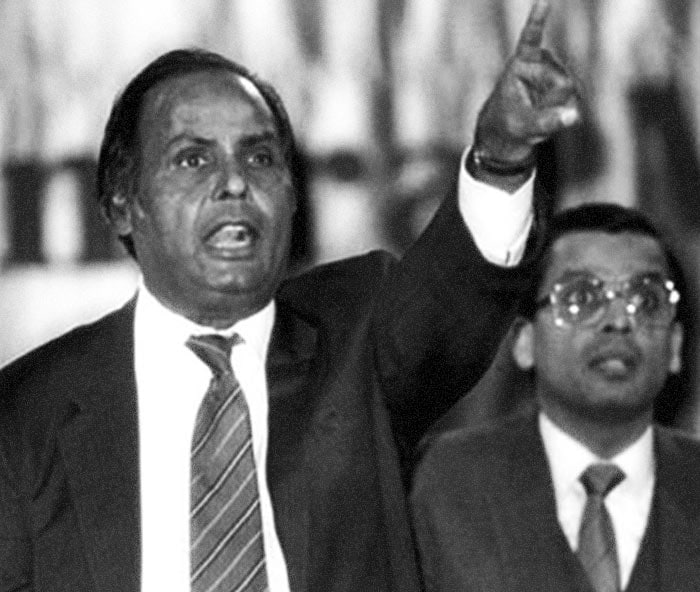 But the Indian rags-to-riches business tycoon's life had it's fair share of controversies too. He was accused of acting unethically, having manipulated government policies to suit his own needs, and was known to be a king-maker in government elections.

A film alleged to be inspired by the life of Dhirubhai was released on 12 January 2007. Guru, directed by Mani Ratnam, shows the struggle of a man striving to make his mark in the Indian business world with a fictional Shakti Group of Industries. (Text source: Wikipedia) 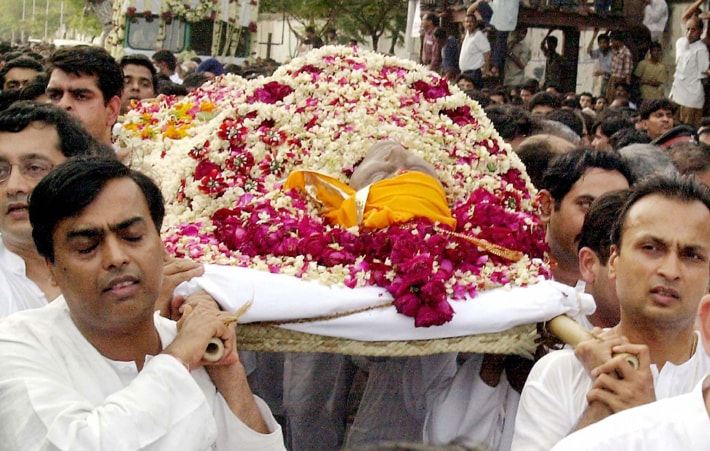 Dhirubhai was admitted to the Breach Candy Hospital in Mumbai on June 24, 2002 after he suffered a major stroke. This was his second stroke, the first one had occurred in February 1986 and had kept his right hand paralyzed. He was in a state of coma for more than a week. He died on July 6, 2002, at around 11:50 pm.

His favourite quotes: "Only when you dream it you can do it."

"You do not require an invitation to make profits."

"If you work with determination and with perfection, success will follow."

"Pursue your goals even in the face of difficulties, and convert adversities into opportunities." 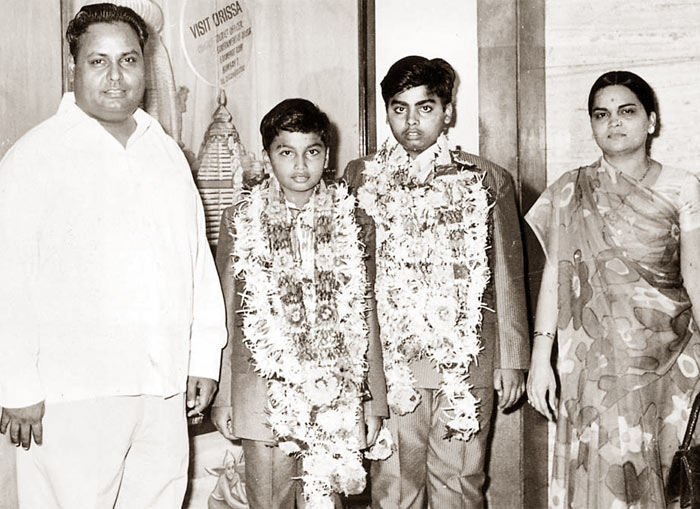 He is survived by Kokilaben Ambani, his wife, two sons, Mukesh Ambani and Anil Ambani, and two daughters, Nina Kothari and Deepti. 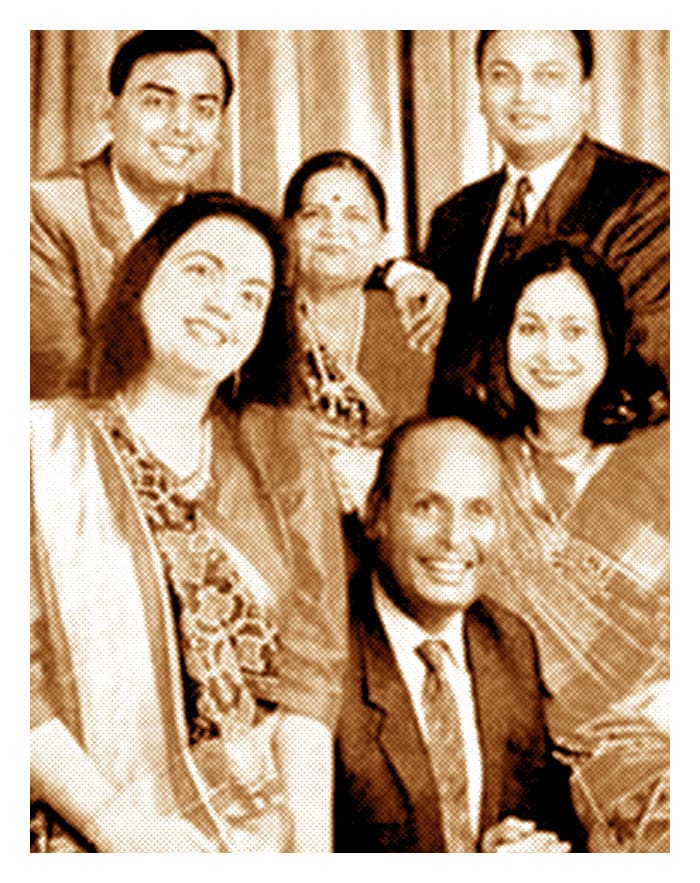 In November 2004, Mukesh Ambani in an interview, admitted to having differences with his brother Anil over 'ownership issues'.

On June 18, 2005, Kokilaben Ambani announced the settlement through a press release.

The Reliance empire was split between the Ambani brothers with Mukesh getting RIL and IPCL while Anil got Reliance Capital, Reliance Energy and Reliance Infocomm. 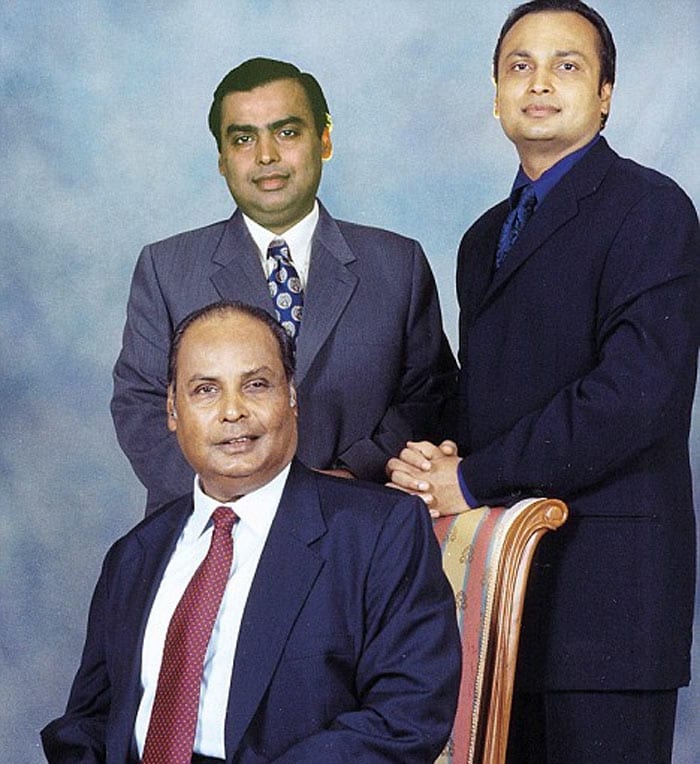 But the dispute didn't end there. India's richest and most iconic siblings are still locked in a legal battle in Supreme Court over the pricing of natural gas from RIL's Krishna Godavari basin.

And as the spat takes yet another ugly turn, many believe the high-voltage battle between the Ambani siblings has put under stress the legacy of their father Dhirubhai Ambani.