Donald Trump recognised the tax reform as a campaign promise during his run-up to the 2016 presidential election, 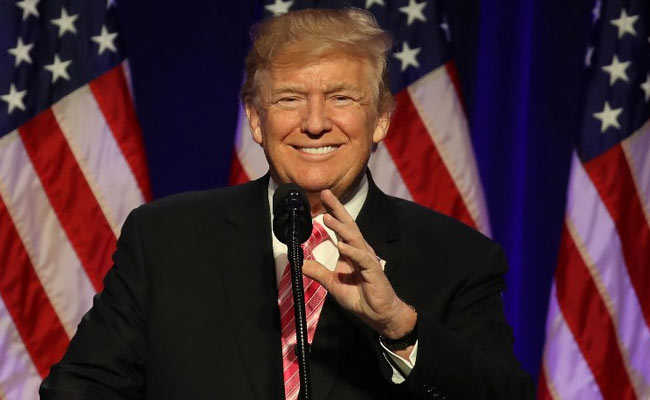 Washington: US President Donald Trump today said the Congress has reached an agreement on tax legislation that will deliver more jobs, higher wages, and "massive tax relief" for American families and domestic companies.

Trump recognised the tax reform as a campaign promise during his run-up to the 2016 presidential election, saying the "giant tax cut" will be his "Christmas gift" to fellow countrymen.

"Now we're just days away ... from keeping that promise and delivering a truly amazing victory for American families.

We want to give you, the American people, a giant tax cut for Christmas," Trump told a select audience at the White House as he delivered an address to the nation making a final pitch for his massive tax reform.

"As we speak, Congress has reached an agreement on tax legislation that will deliver more jobs, higher wages, and massive tax relief for American families and for American companies," he said.

Trump cited an example to explain the impact of the tax cut: "The typical family of four earning USD 75,000 will see an income tax cut of more than USD 2,000, slashing their tax bill in half."

It nearly doubles the amount of income taxed at the rate of zero, he said, adding that the proposed tax reforms also closes special interest loopholes; and lowers tax rates for families. It cuts taxes on businesses, which is expected to raise income by an average of more than USD 4,000, he said.

"It has exported our jobs, closed our factories, and left millions of parents worried that their children might be the first generation to have less opportunity than the last. Our factories have left. So many of them, gone," he said.

"But they're all coming back. And you see it, even before we do this, that they're starting to come back. Our country is starting to do really well again, and as a country we're being respected again," asserted the US President.

Trump told the nation that his administration will "never let bad things happen", with respect to the economy of the country.

"We're not going to lose our businesses again like has happened over the last number of decades. America is coming back bigger, better, and stronger than ever before," he said.

America, he said, isn't content just by getting by.

"America is about getting ahead, about finding the best in ourselves and in each other. We are reclaiming our destinies as Americans, a nation that thinks big, dreams bigger, and always reaches for the stars. We didn't become great through massive taxation and Washington regulation," he said.

Trump said that his administration is cutting regulation at a rate "never seen before in the history of the country".

"That's who we are: a nation of strivers and builders and dreamers and doers, people who treasure their independence and don't know how to quit. Never quit. Never, ever give up -- never, ever," he said.

Earlier in the day at a luncheon with bicameral tax conferees, Trump said the bill is going to cut taxes for American businesses -- both big and small ones -- so that they can grow, hire, and compete all around the world.

"Right now they're paying 35 per cent, and that's the highest in the industrialized world -- in many cases, by far. And we'll be bringing that down to a number that will be extremely impressive to a lot of people," he said.

The plan, he said, is going to bring trillions of dollars back into the United States, money that's offshore.

"You've been hearing me say USD 2.5 trillion for years. Well, 2.5 has grown, and it's going to be a lot more than that -- probably USD 4 trillion. It could be even higher than that.

It's so much money, we don't even know how much it is," he said.

Trump said that "great companies" like Apple, have billions of dollars overseas that they want to bring back.

Man Arrested In UK Accused Of Being Part Of ISIS "Beatles" Group: Report