Melania Trump said that she wanted to know how she could "help these children to reunite with their families as quickly as possible." 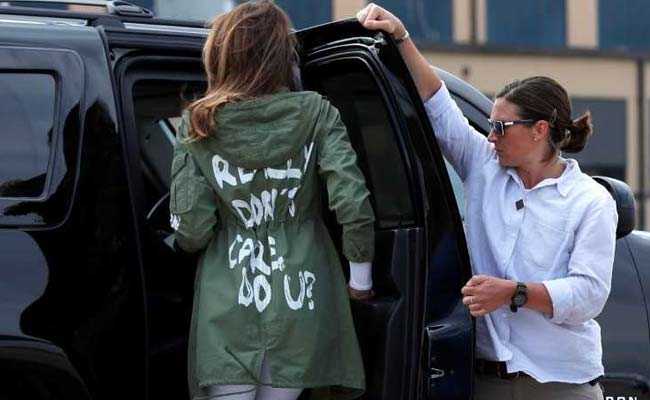 Melania Trump took a surprise trip to Texas to speak to children and officials at a shelter for migrant children. But her message and the carefully crafted visuals showing a first lady rushing to the scene of a crisis touching the lives of children were soon obliterated by other words and images.

"I'm here to learn about your facility," Trump said Thursday afternoon, telling the people who run the shelter that she wanted to know how she could "help these children to reunite with their families as quickly as possible."

Moments after her tour began, photos started circulating online of the first lady boarding the plane for takeoff at Joint Base Andrews in Maryland. Although the back of the coat was partly obscured in the photos, people online quickly identified it as a $39 Zara jacket emblazoned on back with the phrase: "I REALLY DON'T CARE, DO U?"

The outrage was immediate. The first lady did not explain the meaning of the message, though President Donald Trump said she it was directed at the news media. Following the uproar over the coat, he tweeted: " 'I REALLY DON'T CARE, DO U?' written on the back of Melania's jacket, refers to the Fake News Media. Melania has learned how dishonest they are, and she truly no longer cares!"

The president's statement seemed at odds with a statement Mrs. Trump's spokeswoman, Stephanie Grisham, gave earlier in the day. "It's a jacket," Grisham said in an email. "There was no hidden message. After today's important visit to Texas, I hope the media isn't going to choose to focus on her wardrobe."

Mrs. Trump, who did not wear the coat while touring the facility in Texas, was again wearing the jacket when she deplaned in Maryland, headed back to the White House. The choice seemed deliberate: It was 80 degrees and humid and the coat had been a topic of controversy for hours.

It wasn't just the media who focused on the jacket. Immigration advocate David Leopold said he first assumed, when a friend sent him the photos, that it was an altered photo intended to be a joke. When he realized it wasn't, he said he was shocked.

"It mocks the mothers who have lost their children and it mocks those babies we heard wailing on that tape," he said, referring to an audio recording of the cries of young children who were separated from their parents. "It's inexcusable. It's shameful."

On Twitter, the jacket which is from Zara's Spring-Summer 2016 collection, quickly became a meme with users sharing images of it with alternate phrases, including: "NOVEMBER IS COMING" and "DON'T LET THEM EAT CAKE. GIVE IT TO ME."

The controversy was surprising because Melania Trump, a former fashion model, is particularly attuned to visuals, including her sartorial choices. She is known for carefully selecting her clothing to match the moment, whether it's an attention-grabbing hat worn for the first state visit of her husband's administration or a plaid shirt sported for an event in the White House garden with schoolchildren.

But her choice on Thursday called to mind another trip to Texas. Last year, when the first lady accompanied her husband to see the destruction caused by Hurricane Harvey, she wore a pair of towering stilettos when boarding the plane. She had exchanged them for practical sneakers by the time she arrived, but she was criticized for looking out-of-touch.

Mrs. Trump's forays into public life have often been knocked off message. In May, when she debuted her "Be Best" initiative, the headlines were soon overtaken by those noting that some of the literature associated with her effort closely resembled material published by the Federal Trade Commission during the Obama administration. And after she addressed the 2016 Republican convention, passages of her speech appeared to have been lifted from former first lady Michelle Obama's 2008 address to the Democratic convention.

On Twitter, Grisham continued to lament that the brushfire caused by the jacket had stepped on her message. "If media would spend their time & energy on her actions & efforts to help kids - rather than speculate & focus on her wardrobe - we could get so much accomplished on behalf of children," she wrote, adding the hashtags #SheCares and #ItsJustAJacket.

Stephanie Cutter, who was deputy campaign manager for President Barack Obama's reelection campaign, said the first lady could easily have avoided the shift of attention. "It's a basic rule of thumb that if you don't want to make your clothing the focus of the story, then choose what you wear carefully so that it's not," she said.