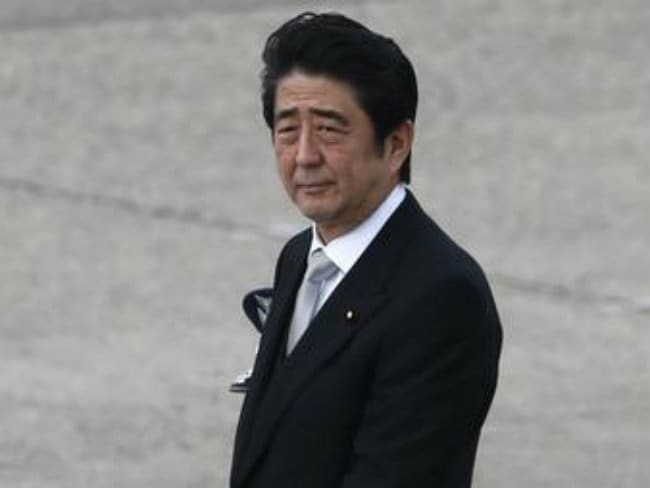 Tokyo: Japanese Prime Minister Shinzo Abe said Tuesday he would pledge a 26 per cent cut in the country's greenhouse gas emissions, ahead of a global summit on climate change this year.

Abe also promised to take a "leading role" in the international drive to reduce pollutants blamed for global warming.

"This is an ambitious target which is no way inferior to other countries internationally," Abe said in a climate change cabinet meeting Tuesday.

The plan "reflects the Abe administration's goals of lowering reliance on nuclear power as much as possible, with efforts in energy saving and the introduction of renewable energy to the maximum extent possible," he said.

The pledge, which uses 2013 as the base year, has been dubbed unambitious by environmental groups since it was first proposed in early May.

"I will take a leadership role towards realisation of a fair and effective framework in COP21, explaining Japan's position on the emission target at the Group of Seven (G-7) summit" in Germany opening this weekend, Abe said.

The November 30 to December 11 COP21 conference in Paris faces the difficult task of reaching consensus among the 196 parties involved.

At the core of the deal would be a roster of national pledges for reducing greenhouse gas emissions - the invisible pollution from fossil fuels that drives climate-damaging temperature rise.

So far, only 38 parties have put their carbon pledges on the table, according to the website of the UN Framework Convention on Climate Change.

Among the major emitters, submissions have been made by the United States, the number two emitter, the number three emitter the European Union, and Russia, ranked fifth, but not by Australia, Brazil, India, Japan, or China, the world's No.1 emitter.

"After soliciting public comments, we will formally submit the plan in mid- to late-July to the United Nations," said Yoshihide Suga, Chief Cabinet Secretary.

Abe's nod came after Tokyo proposed a fifth of its electricity should come from nuclear power generation, despite widespread opposition in the aftermath of the Fukushima disaster.

With none of the nation's nuclear reactors in operation, the target indicates an intention to bring most, if not all of them, back online.

In order to achieve the proposed emissions cut, Japan will also ramp up its reliance on renewables such as solar and wind power, which, under the energy mix proposal would account for 22-24 percent of Japan's whole electricity demand in 2030, double the current portion.

But Tokyo has to do more in inducing investment in renewables even to achieve the current renewables target, said Yamazaki, founder of US financial giant Goldman Sachs's asset management business in Japan.