Will KCR Hold On To Telangana? Watch Prannoy Roy's Analysis

Though the KCR's Telangana Rashtra Samiti vehemently denies it has a credible challenger that can unseat it in the key southern state, the Congress, which is contesting the Telangana assembly polls for the first time under the leadership of its president Rahul Gandhi, has forged an alliance with N Chandrababu Naidu's TDP in hopes of doing just that. Shelving years of acrimony between their parties, Mr Gandhi and Mr Naidu recently made an appearance at a rally together in the state. Mr Gandhi had said that he and Mr Naidu shared a good chemistry. K Chandrashekar Rao, Telangana's first Chief Minister who is seeking a second term, seems undeterred with their show of strength as he has been launching sharp attacks at both Mr Naidu and Mr Gandhi. While KCR banks on the schemes he launched for the people of Telangana, the Congress-TDP alliance is counting on the anti-incumbency factor against the government. On the show, NDTV's Prannoy Roy discusses how the December 7 polls might pan out for both the sides.

The election is crucial test for the opposition's unity, says Prannoy Roy

It is a very different election: Prannoy Roy

In 2014 state elections, TRS crossed the halfway mark comfortably but the vote share was a close three-way split between the major parties. 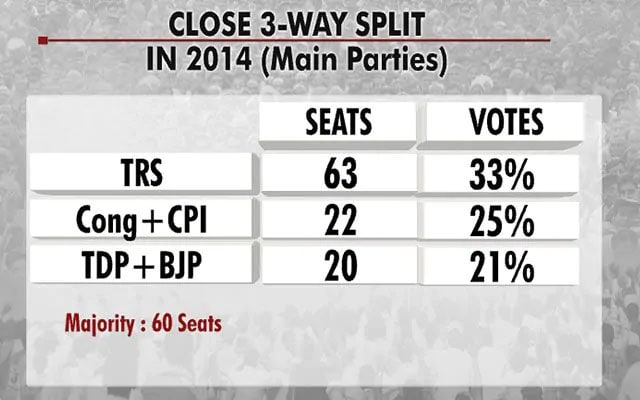 Vidhan Sabha vs Lok Sabha election - a look at how the state voted in simultaneous elections in 2014. Per historic data, independents, smaller parties tend to do better in assembly elections. 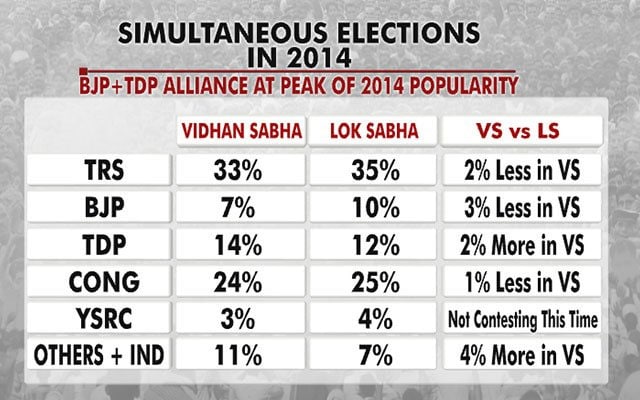 There's been a major shift in allies since the last polls with TDP switching sides from BJP to Cong+CPI. If the state votes in the same manner that it did in 2014, the new political tie-ups would mean a very close fight - with a 2% margin being key. 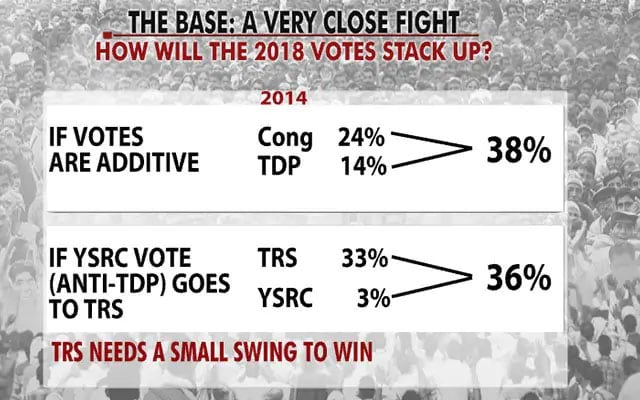 The two major factors underlying Telangana Elections 2018 are "sub-nationalism" and welfare schemes. To know how these factors could cause a huge swing, watch our special election analysis here. 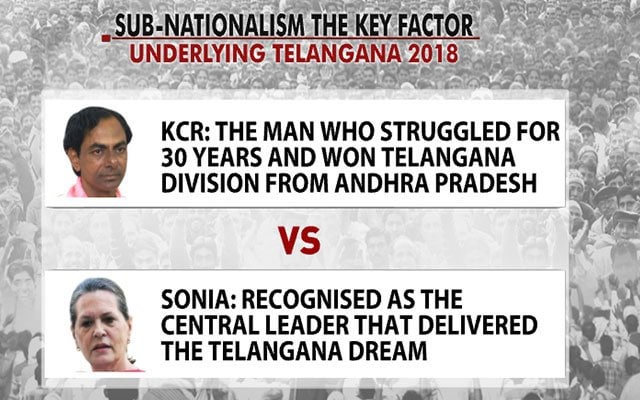 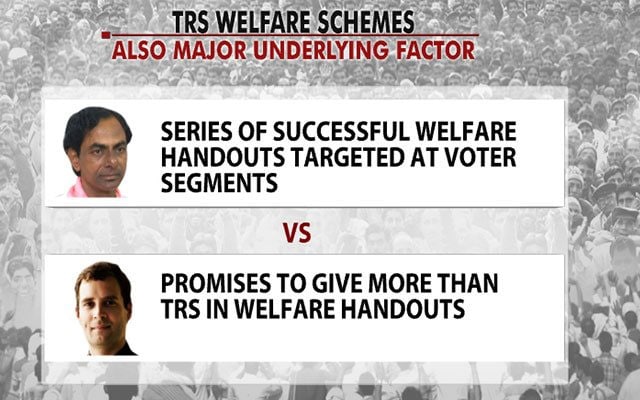 Congress or BJP - K Chandrashekar Rao on his main opponent

"There is no enemy. There is no match to the TRS (Telangana Rashtra Samithi) party... We are going to win with bumper majority."

"TDP has diminished here. Chandrababu Naidu is unfortunately doing silly politics in this state. He has utterly failed to deliver in the state of Andhra Pradesh. He is a flop there. You will see it in the time to come... The number of seats he is contesting here itself is an indication that he has conceded, agreed that his party is nowhere in Telangana. Or he would have contested on his own. Why is he allying with the Congress?"

"Ayodhya issue is not my issue, it is not the people's issue. It's a silly political issue played by the BJP. When elections come near, they start selling the Ram Temple."

From pensions, free electricity, water taps to farm loan waiver - a status report on the impact of welfare schemes in Telangana polls. 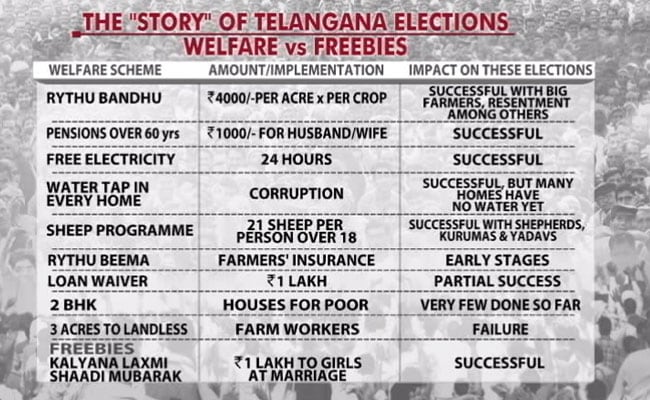 The religion, caste and sub-caste factor in the state which votes on December 7; results will be declared next week. 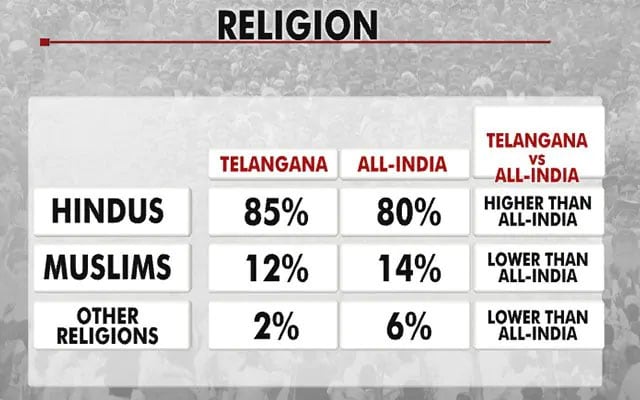 Urban vs Rural divide: Telangana has less rural and more urban voters than the rest of India - the 29th state of the country has a 39% urban population as compared to the 30% across India. 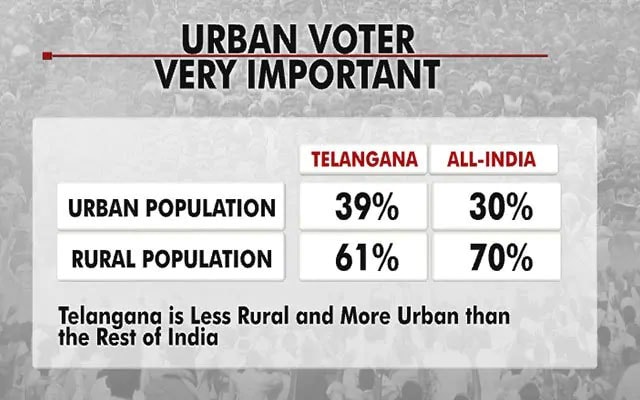 Question: We have talked to some people in the public, they are also saying, he is from Andhra, he is stopping water, he is taking cases, so Andhra Telangana rift, how do you overcome that?

N Chandrababu Naidu: No what I'm saying is, they instigated people on Telangana sentiment. Even today they are doing the same thing, that's why I want to answer, everywhere I'm telling to them all projects started by me, all developments started by me. Now I can't come and become Chief Minister here, only I can be a helping hand.

Question: But it's also being said, it's quite popularly believed, that you are blocking Telangana's water.

N Chandrababu Naidu: No, that is not correct. I have clarified it here and made it very clear.

Question: You have tied up with the Congress, many people say you hurt the Congress. That you are not liked in Telangana. That the Congress would have done better if they would have gone by themselves. What do you think?

N Chandrababu Naidu: No that's not correct. If all of us are divided, we will have a problem here. Even in the beginning Congress is very nominal, that is the expectation of the KCR. When we are joined together, then it becomes a big force.

Question: The fact that you don't have as much of a voter base, but 50% of the campaign are like Mr. Naidu Naidu Naidu. Why is it so?

N Chandrababu Naidu: Yaa that's what I am saying. He wants to instigate only that. He is saying Andhra sentiments, Andhra Vs Telangana. It is no longer relevant, now he is instigating over the water issue.

Question: Is he bringing back 2014 when an environment of hostility was there between the two states?

N Chandrababu Naidu: He is trying but it cannot happen, now his performance matters.

Question: But is this going to set a stage for the national politics because in Telangana, if we say that the Congress and Telugu Desam are together...if you actually don't make it then it won't impact your national coalition effort?

Question: What is the main message that you give to the crowds?

N Chandrababu Naidu: What we have done is the development of Telangana. There is lot of development. Lot of them are getting development but they are misusing it, benefits are not transferred to common man.

Question: There is a widespread belief here among the people of Telangana that you will run the government from remote control even if there are 5 MLAs and they say that Babu is a past master at this.

N Chandrababu Naidu: What I am saying is, it is all instigated by him.

Question: It doesn't matter who instigated, what matters is what people believe.

N Chandrababu Naidu: What I am saying, 1 or 2 people may be there. But I am very clear when it is time for me to come and run Telangana, if there is anything that I can help...If that is the case, then why they are coming? (points to the crowd). Yesterday you have seen in the crowd, what is the response.

Voting patterns in the state where freebies and welfare scheme are a significant influencing factor. 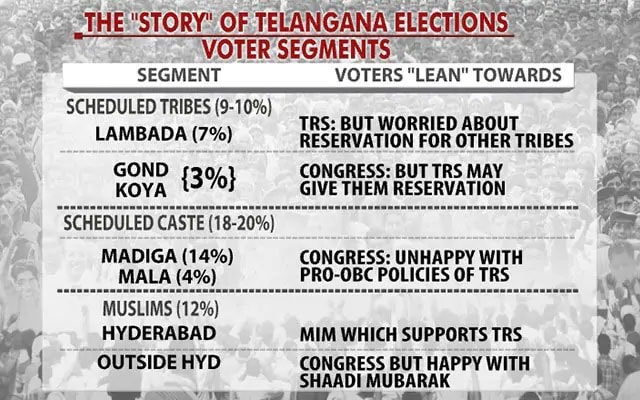 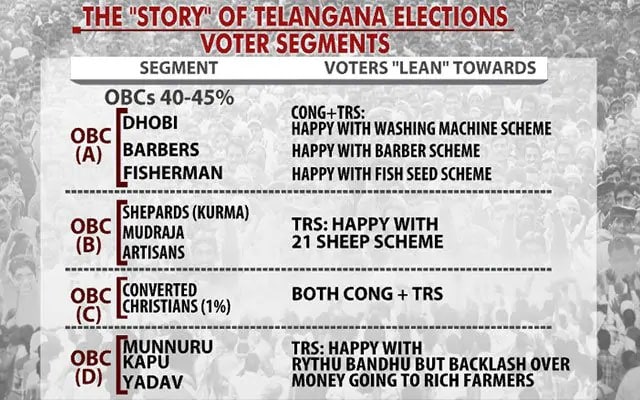 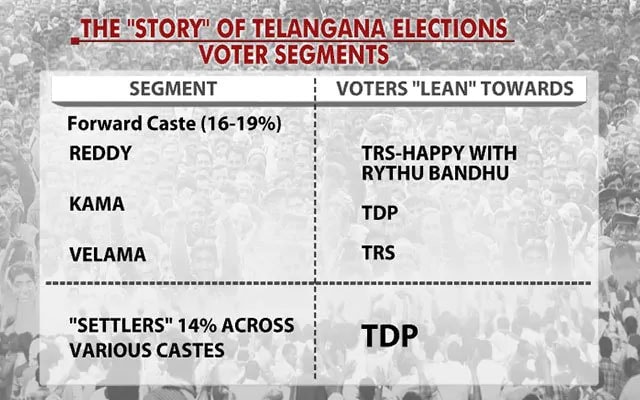 KCR led-TRS has a stronger base in the northern part of the state compared to the southern with the party's average margin of victory as high as 20% in the 2014 Vidhan Sabha elections. 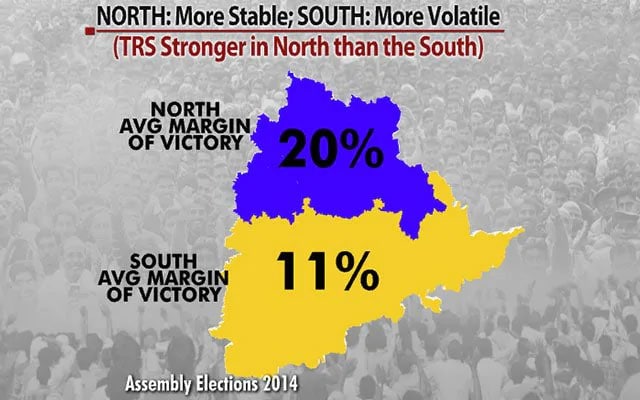 The 8 bellwether seats to watch out for as polling for 119-member assembly is held on Friday. Andole has always voted the same party that's won the state in the last 30 years. 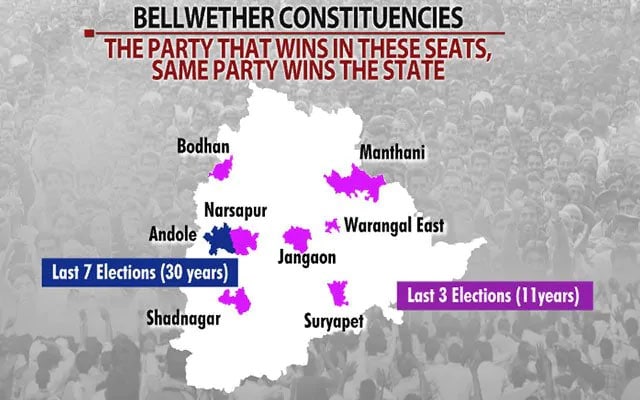 "Both national parties, Congress and BJP, have let down not just Telangana, but the entire country": KT Rama Rao, Telangana Chief Minister KCR's son, to NDTV

Congress-led alliance or BJP-led alliance in 2019? KT Rama Rao says "There could be a very very strong federal alternative"

"Everybody in Delhi seems to think that the world is bipolar. But we don't think so. Why do you presume that it is either NDA or UPA, it's either Modi or Rahul? I think the country can throw up many other options. There could be a very, very strong federal alternative, where like-minded regional parties could come together post-2019 April and they could even decide, in fact even Hyderabad could also decide, who could sit in the Prime Minister position."

"We are not greedy, we are not super-ambitious. We just want our agenda to be enforced by the next government. What agenda is that? We really want the states of this country to get more from Center, to be empowered because stronger the states, stronger the country."

"Happy where I am": KT Rama Rao tells NDTV

"Don't have any larger, grandiose plans of becoming the Chief Minister. But I do believe, a strong leader who can really make tough decisions and tough calls, like KCR, needs to be in the hot seat for Telangana for at least 10-15 years. So, my only ambition is that he is re-elected again, I have no grand plans for myself."

KT Rama Rao on Congress and TDP coming together in Telangana

"It has made it a lot easier for us. Because this very combination has perpetrated injustice on Telangana for 67 years - 50 years of Congress, 17 years of TDP. Now, the people get a golden opportunity to shoot two birds with one shot. So, I think it is a fantastic opportunity."

KT Rama Rao on what he likes about PM Narendra Modi

Will the TRS retain power in Telangana? Here's what opinion polls suggest on who will cross the halfway mark of 60. 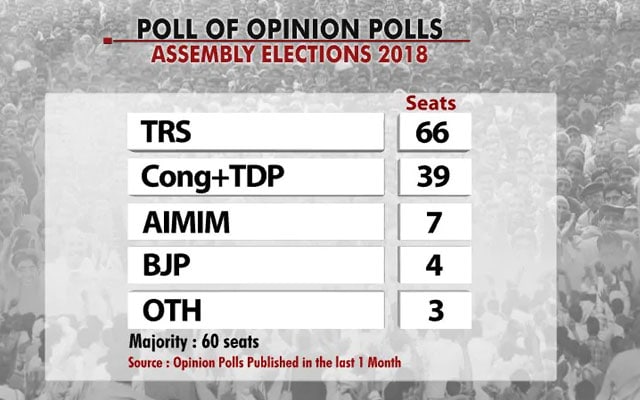