Jana Sena Party (JSP) chief Pawan Kalyan is a prominent face in Andhra Pradesh and Telangana politics. Ahead of the Lok Sabha election, he has joined forces with Mayawati's Bahujan Samaj Party, a major player in Uttar Pradesh politics. Will this alliance turn the tables for Pawan Kalyan? The actor, in an interview with NDTV's Prannoy Roy, talks about his party's prospects in this month's national election.

Here are the highlights of Pawan Kalyan's interview with Prannoy Roy:

Dr Roy: Thank you so much for joining us, it's really an honor to have you with us. You are a larger than life figure. You are working at such a hectic pace right now, taking this time, very very grateful.

Pawan Kalyan: Thank you sir, even for me it's a great honor to be interviewed by you and Shekhar ji.

Dr Roy: From what we have been saying, you know you are hugely successful in films but politics seems to be in your DNA. In a sense that you feel that you are very idealistic. Are you too idealistic?

Pawan Kalyan: Sometimes if you are too idealistic, sometimes I myself feel am I being too impractical? I said you have to have a kind of an attitude to achieve something. For me, I said what do I have to lose? Always allowed to walk into the unknown. Any individual goes to any extent to earn money, thousands of crores, if he has the madness to pursue that part to create a lot of suitcase companies and do a lot of scams. If they have that kind of madness, why can't I be at the opposite side.

Shekhar Gupta: When you speak to your supporters these days you are campaigning, what is the central message? What's the most popular thing you say, you are an actor so you must have something that makes people excited.

Pawan Kalyan: I feel that I don't give any of my opinions or such, but what is there prevailing amongst them. They don't want welfare activities, they don't want freebies. They say give us future for the next 25 years. I picked it from one of the youngsters, so I said it is not about the 25 kilos of free rice, or Rs 2,500 unemployment payment. I am here to work for your future for the next 25 years.

Shekhar Gupta: But people who give the doles and freebies, they are the ones who win the elections.

Pawan Kalyan: What I believe in Nicholas Taleb's Black Swan, unless someone tries, he does the opposite and no one believes in it. So I prefer to give that surprise constantly because, I could see this change, people wanted change since 2004. And even Mr Modi, people wanted the change and that's why they rallied behind him. But the BJP might be thinking that they created the manufactured concern but actually it is not. People wanted a change, they have been experimenting with other people, in each and every state, even here, they experiment with different people. So I believe that, though as you said, people who do freebies might be the ones as of now. But we have to prove an example and these elections could be one. 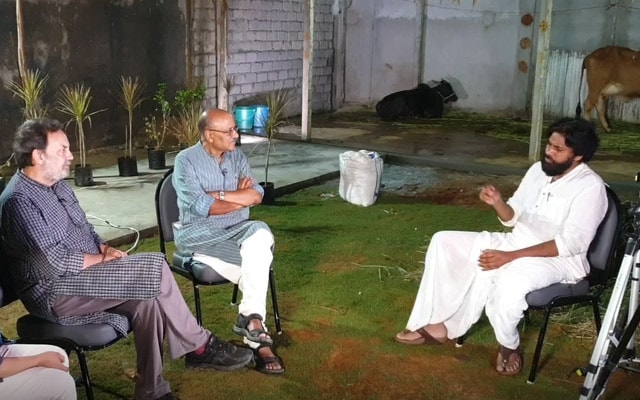 "Don't like to use the word 'king' or 'kingmaker'": Pawan Kalyan to NDTV. 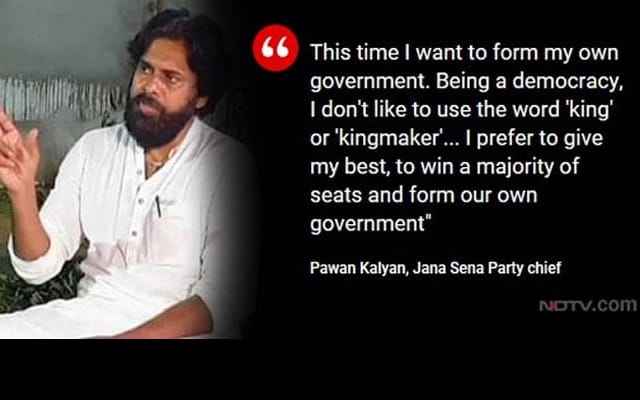 Uma Sudhir: You have been involved with elections for quite a few years now. First with your brother and then in 2014, should I say you were a kingmaker. This time are you fighting to be king, kingmaker?

Pawan Kalyan: No, this time I want to form our own government. Because first of all, I don't like to entertain a thought of being a kingmaker and I don't like to use the word king. Being a democracy, I don't like to use the word king or kingmaker. We are here appearing for a counsel which really does the right things for the society and because if I say that I, in your particular phrase, kingmaker or king. If I start saying that or even thinking that means that I am not giving my best to fight independently. So even at a thought level, I don't. I prefer to give my best, to win a majority of seats and for our own government.

"What do I have to lose": Pawan Kalyan to NDTV 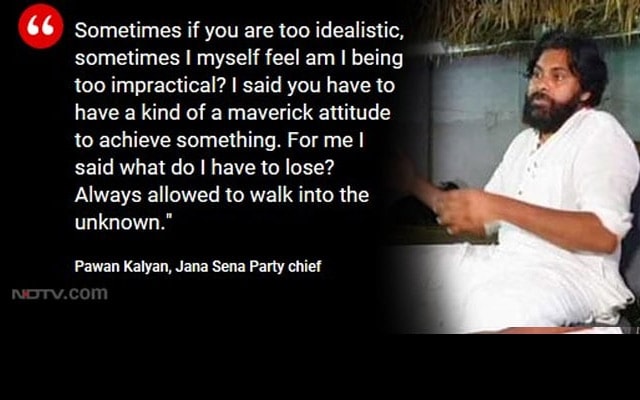 Uma Sudhir: But you have been focusing only on a few districts, people would say.

Pawan Kalyan: No way, because I have traveled extensively for all these months. Though there is a perception created by both the parties, if they say I don't have strength, there will be 3-and-a-half lakh people running behind me. So, repeatedly we have to prove it. But the problem is that they have political muscle and they have a knack to say it. So that's what they have injected in other peoples' mind. So constantly I have to counter it.

Pawan Kalyan: For me, the vision is about, so, when I was growing up, my biggest dilemma was we grew up at the times of the cold war, in my school they were teaching us about patriotism and teaching us about great national leaders, how they had sacrificed their lives, but in reality what we used to see is were corrupt political leaders. For me, I couldn't comprehend that. How come they are teaching us this and these people are doing that. And they used to come to our functions. What I hear on roads that this guy is a corrupt MLA and these guys used to come and we used to say respected MLA so and so is coming. It used to create a conflict in me. So that made to go deeper in it and as I was growing up, I went into Sangh, I used to look at a lot of Sangh activities. A lot of radicals used to be there, radical meetings used to be there. Post 10th grade and intermediate. So, I was in a state of confusion, what is right, because we want to do something. Which way, what thought I have to embrace, to do something. Shekhar Gupta: So who did you get closer to? Radical left or radical right?

Pawan Kalyan: Somehow I believe that you have to stand in the center.

"Here to work for people's future for next 25 years": Pawan Kalyan to NDTV. 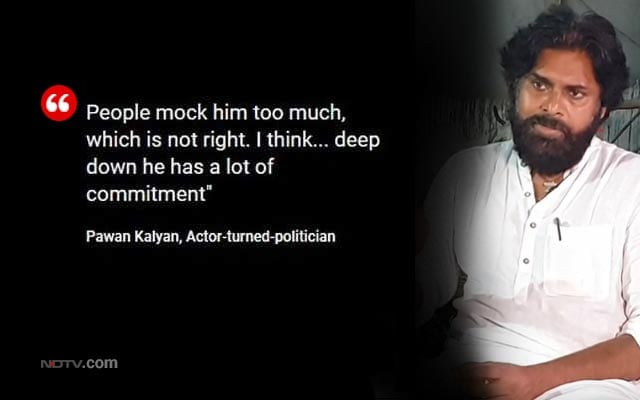 Dr Roy: So, how would you like to make a difference in politics?

"Always allow myself to walk into the unknown": Pawan Kalyan, Jana Sena Party founder, to NDTV. 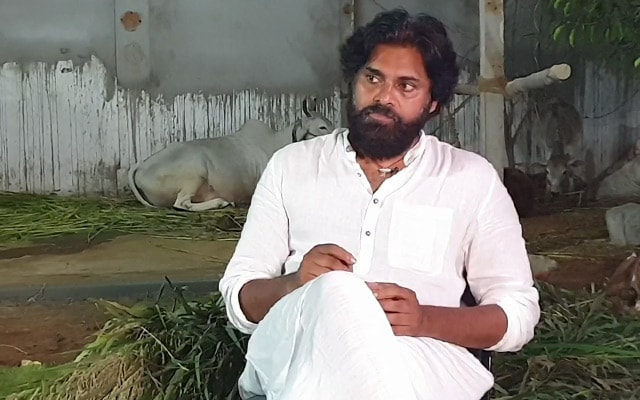 T20 World Cup In UAE A Bowlers' Tournament So Far