The economic activities in India and most of the world have come to a grinding halt because of coronavirus. Most of the major economies are in a state of complete shutdown to break the chain of the viral infection, which has infected over 1.5 million people across the world. Prime Minister Narendra Modi last month announced a nationwide lockdown to check the spread of the virus. He, at an all-party meeting recently, said the lockdown may be extended. The big question is: How will the virus affect India economically? Dr Prannoy Roy discusses with former RBI chief Raghuram Rajan.

Here are the highlights of Raghuram Rajan's interview:

If the virus spreads, as it has spread in Italy and the United States, we have to take it very seriously. What you see in these countries is a tremendous effect on public health, the over burdening of many hospitals and many deaths and of course, when that is happening, economic activity is hard to carry on. So, if we want to avoid that, we have to bring the curb of infection down in India. Good news at least from the numbers that we see is that we've had early warnings. What we have to do is make full use of the warning we've had. 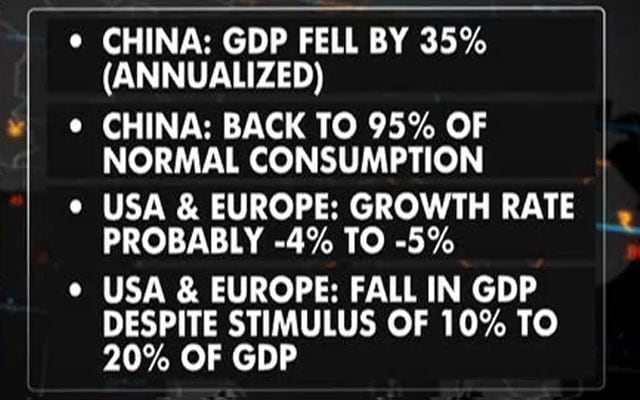 Almost surely a deep recession, this year we're already seeing evidence of it from the shutting of the plants. China in the first quarter experienced a fall of something like 35% of the GDP annualized. They're bringing their plants on back, core consumption is now 95% of normal. But still there are many sectors that are not back to normal. 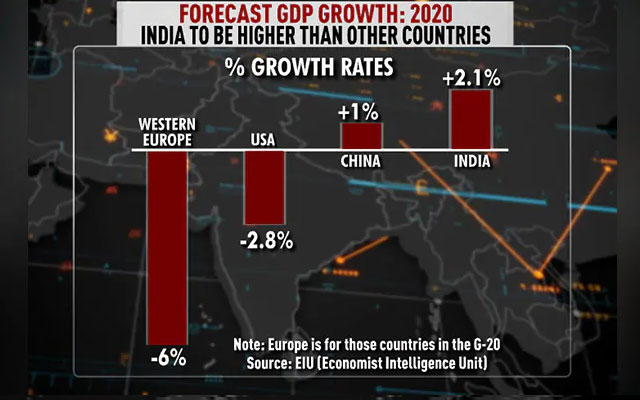 Well I mean it (India's GDP) goes somewhat negative. I think a lot depends on the measures we take and the extent of lockdown we impose. I would like to think being entering positive territory would be on the optimistic side. 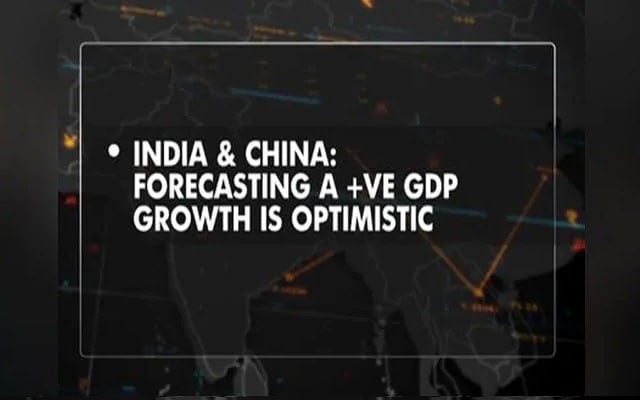 It (economic recovery) will vary industry by industry. So, you can imagine, for example, if the auto industry can reform the workplace, somehow it could get a lot of people back to work and produce cars. But the question is, do people want more cars now that they know that going in public transport runs the risk of infection, or has their attitude towards life changed as a result, they want to consume less? We don't know, a lot may change as a result of this. 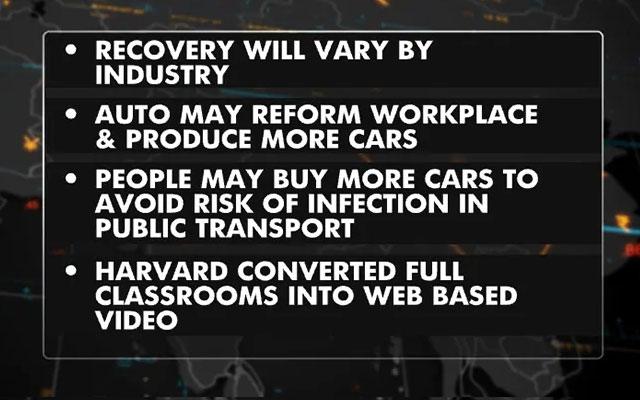 A lot of us have ramped up our knowledge of technology, of all the fancy devices one can use, so it is possible for industries to change their work practices. The first sign of difficulties in India is often difficulty in foreign exchange. So far compared to other emerging markets, our exchange rate has stayed quite stable, presumably from some support of Reserve Bank of India, relatively stable. I should say we have depreciated some against dollar, but you know countries like Brazil have gone down 25%. I think we have to be careful that whatever we do, we explain carefully and explain we're not throwing fiscal deficit out of the window. We are going back to reasonable fiscal numbers. You simply can't spend 12%, 13%, 14% of GDP with any sizeable fiscal stimulus. We will have to spend this year without people starting to wonder what the end game is. 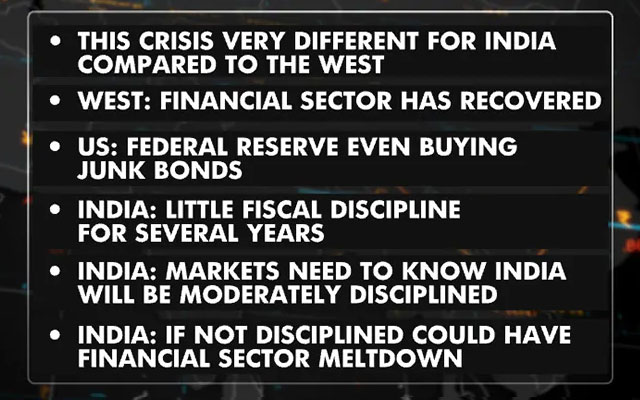 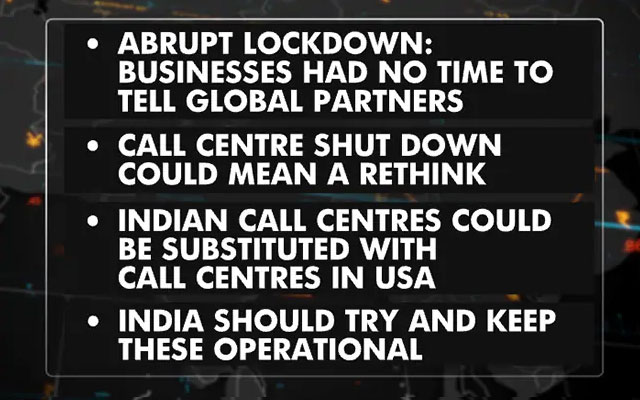 One of the concerns is in an abrupt lockdown, businesses get very little time to tell their partners across the world. For example, our call centres, as you point out, are intermittently linked to business activities in the US and elsewhere. So, when a US bank calls in the call centre in India where its operational, it has to slow down business and this is the time with all these applications from both retail and wholesale. 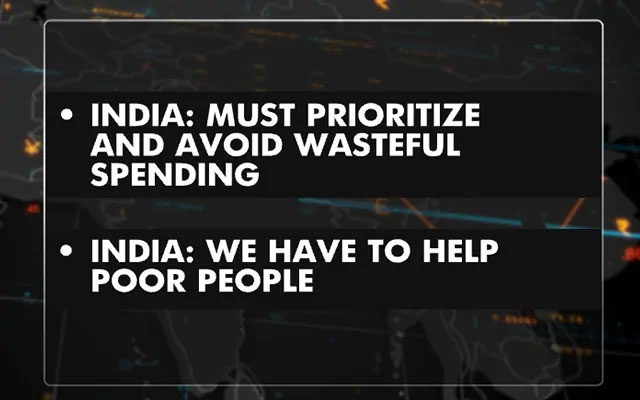 So, it's really important we think about all the consequences of shutting down, including which is the most important public health, but we also need to try and find ways, as some of these entities, which are part of global supply chain, can in fact operate during such times. 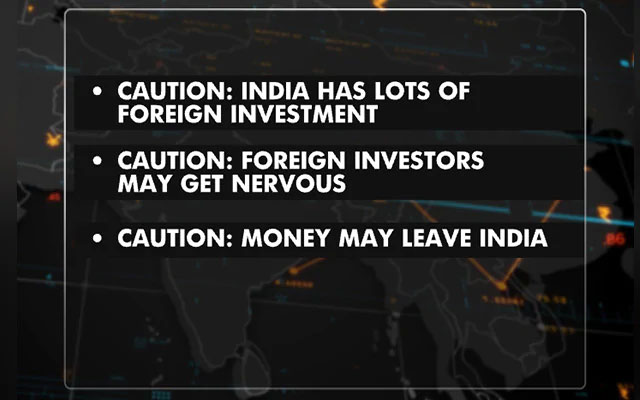 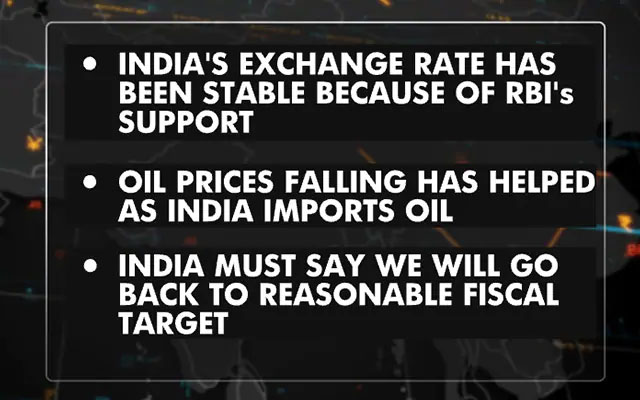 So I think on the individual side it is obvious in terms of need, the poorest, jobless and the elderly, as well as the people who don't have salaried jobs and all who have very, very, modest living, they are the ones we need to help to be together, to be able to survive. I think the government has announced the package, the question is - is that enough to keep people in reasonably good health and reasonably access to good food and shelter? The concerns in India have to be, we have a fragile financial sector to begin with, which is not the case in the United States, banks are very well capitalized, held low levels of NPA. So in the US the concern will be, yes if this crisis goes on for a longer time, there's a second wave of shutdown, if households basically start defaulting over their mortgages and car loans, that would feed into non-performing assets and of course defaults would also pick up, so a lot depends on the duration there. In India it's a little different because we start with a fairly fragile corporate sector as well as financial sector, slow growth over the last few years, the additional worry is that this time around retail loans, which have been around where the banks have lent a lot because they've shied away from corporations, that if people start losing jobs, if companies start reducing their workforces, that may not be as robust this time around, you could see many more retail defaults. I think the broader point is, at least while they are in trouble, they have to be helped with cash flows. Now you have to be more careful because one man's debt payment is another man's income. The assumption is the person to be returned money is richer and more fortified than they are, but you have to be careful if you propose moratoria, propose bans on evictions during this time, etc, that in fact is going from the weaker to the stronger. Some way from cushioning of this blow of time also makes sense, no point giving them cash transfer if it goes directly to their other payments, leaving them with nothing. What you can do is to keep the healthy from turning unhealthy, so that you, the entities, have the capacity to maintain their workers, that have the capacity to produce once again. Once the restart happens, those entities should get adequate funding and of course if the banks are scared of the lending at this point, we have to find a way, innovative ways of doing it, probably more guarantees from entities like the small industry bank in India. I would emphasize that in emerging markets, if you want to save on resources, you have to look at first the viable part of the corporate sector to help, and you know the large companies will establish that they employ lots of workers and we have to make sure that none of them go under in this period to the extent that it can be done with modest resources. So for example, some of them are finding it difficult to raise funds in the corporate debt markets and some of them find that bankers don't want to lend more, so perhaps more of an attempt to prop up the market for corporate bonds, that is something the RBI could help in, for example by lending to financial institutions like insurance companies, well managed MBFCs, as well as the banks and encouraging them to use those loans to invest in those corporate bonds, so that large firms have new source of access to funds. 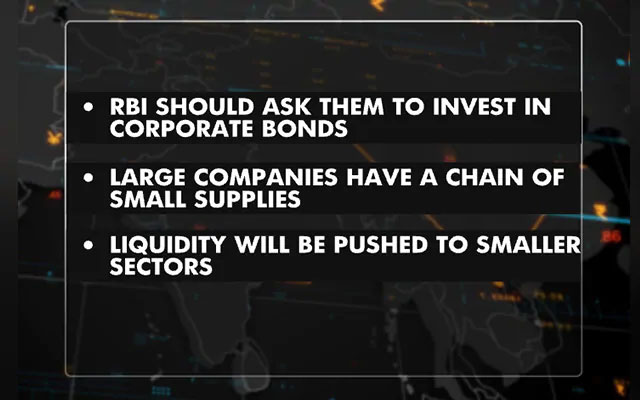 What I am advocating is two things; one that RBI open the window wider for the kind of collateral it will accept, including for example, investment rate corporate bonds that will allow them to refinance many of these banks against some of the assets that they have, which earlier they couldn't borrow against from the RBI, so that could pump more liquidity into our existing banks. 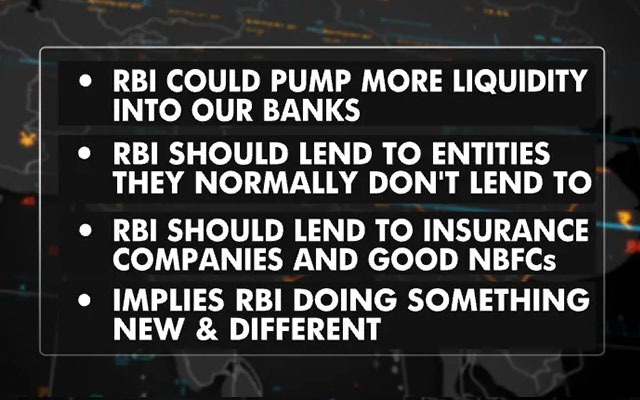 The second thing I am suggesting is that lend to entities that they normally don't do, such as well managed MBFCs, as well as insurance companies and see that these companies cannot expand more assets by buying more corporate bonds, that will push more liquidity into the system and of course MBFCs can make direct loans also as they have been doing. Again, it does imply that the RBI will be doing something different, something new. 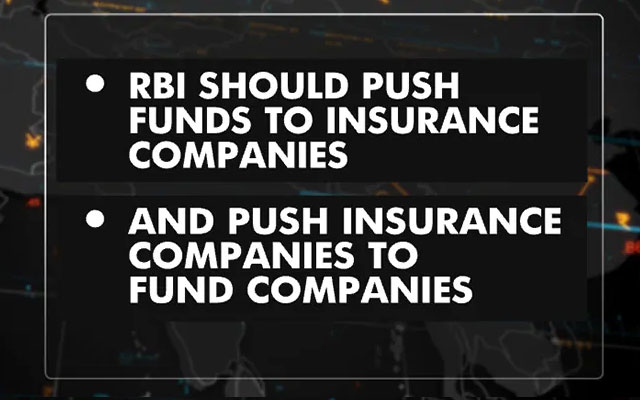 Well the RBI's equity has been a matter of constant debate over time and when I was Governor and there was a lot of talk about it, on a big wave to the government I said, look you own this, you own the RBI, the RBI is a holy grail subsidiary of the government, this is an asset of the government, and all you have to do is do the accounting, show that you have an asset which is worth 8-9 lakh crore, which offsets some of your liabilities, if you don't actually need it to be paid, because it is very hard for the RBI to pay it out. 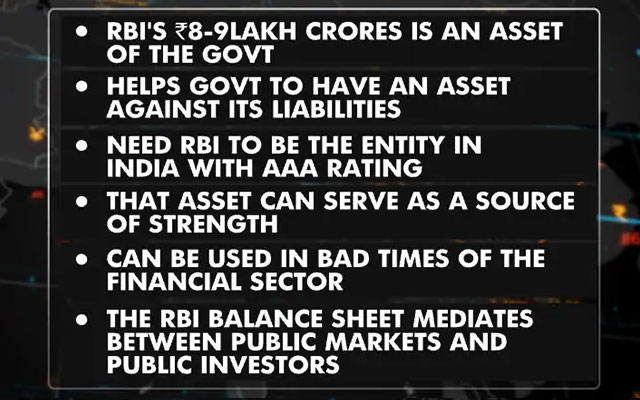 So that's another thing we focussed on very much, which was building our foreign reserves in bad times. Of course we did not want the Rupee to appreciate too much that we were the toast of the town and the money was flowing in so we, I keep saying we, I still feel a proprietary tone towards the RBI, but the RBI has done a great job in building up reserves, again for the rainy day. We saw 14-15 billion dollars leave, but that wasn't a huge problem because we have a substantial level of reserve. 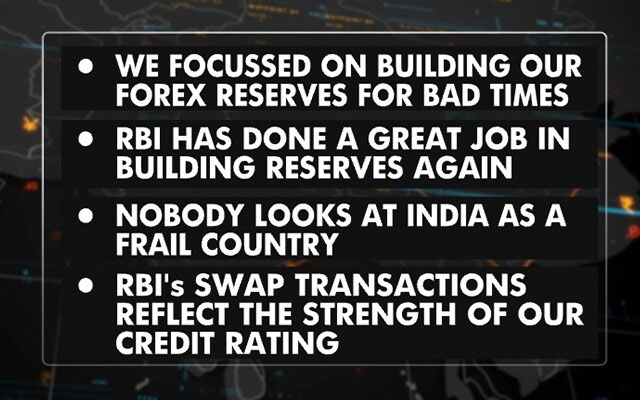 FCI is sitting on immense amounts of food grains and you know it costs us to store them and to pay for them, so this is a good occasion to use them. Of course the governments are often reluctant to use these stocks because they will account for it as pending etc. but not using it as this time is pennywise and foolish. 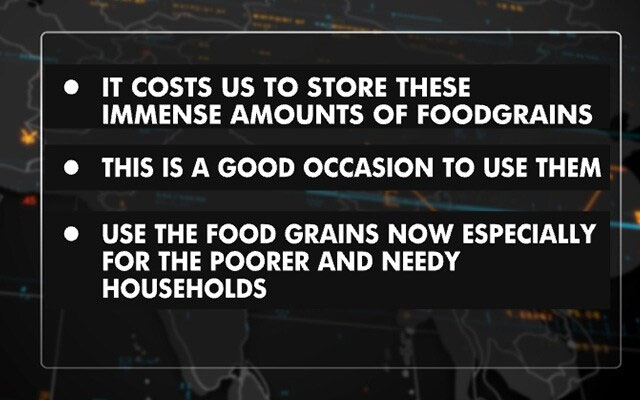 Look I think it is a time of emergency. I am an Indian citizen and I am very, very, closely engaged in seeing what is happening to India and worry about it every day. An Indian citizen when called upon will do what is necessary in a time of need, so I don't think that's an issue. 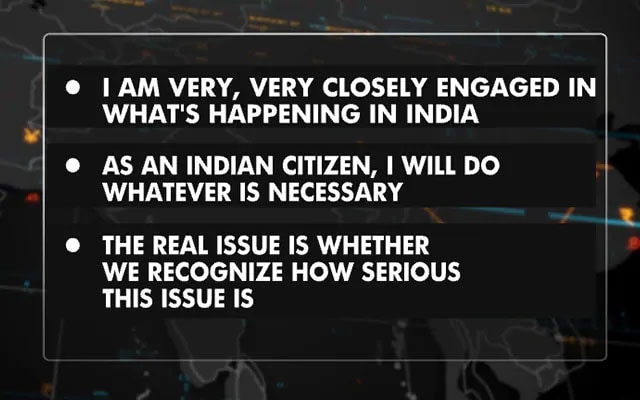 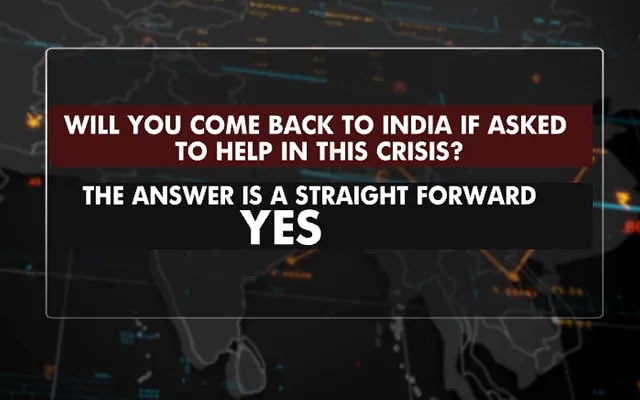 (On working in India) The answer is a straight forward yes.