Having left much of the stimulus burden to the central bank early this year, PM Modi is now taking bolder steps to reverse the decline. 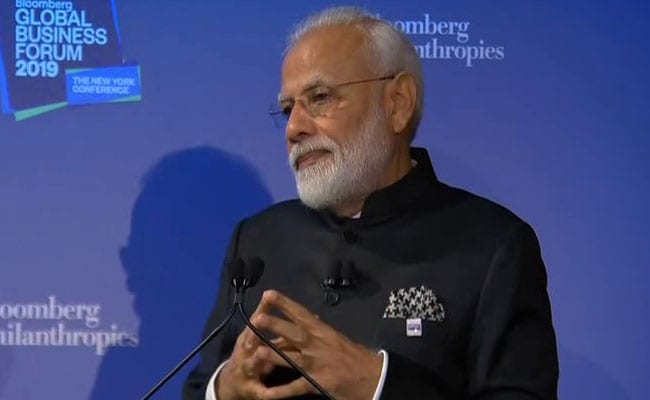 The bad news is getting worse for the economy and Prime Minister Narendra Modi is exhausting all options to stem the fallout.

Data on Friday will likely show the economy had its weakest performance last quarter in more than six years, with the growth rate dropping below the symbolically important 5 per cent mark. It's a culmination of several months of downbeat figures, from plunging car sales to shrinking factory output and an export slump.

Having left much of the stimulus burden to the central bank early this year, PM Modi is now taking bolder steps to reverse the decline. In recent months, the government has slashed corporate taxes, set up a special real-estate fund, merged banks and announced the biggest privatization drive in more than a decade. While authorities are committed to doing more, the policy room may be narrowing.

"Domestic demand is displaying chronic weakness, with an apparent credit crunch afflicting wide swaths of the economy," said Taimur Baig, chief economist at DBS Group Holdings Ltd. in Singapore. "Production and sales are under pressure, and public spending is running out of room due to poor tax collection." 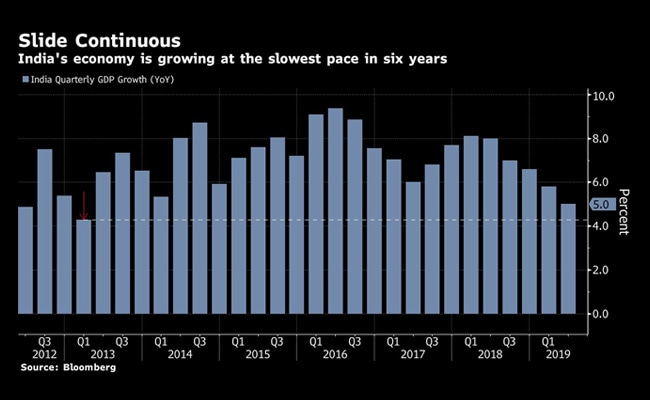 Friday's eagerly awaited data will probably show gross domestic product grew 4.5 per cent in the July-September period from a year ago, according to the median estimate of 41 economists surveyed by Bloomberg. That would be the slowest pace since the March quarter of 2013.

India was the world's fastest-growing economy until last year, posting quarterly growth rates of as high of 9.4 per cent in 2016. A crisis among shadow banks -- a key source of funding for small businesses and consumers -- weak rural spending and a global slowdown have since conspired to bring down growth steadily.

"The nature of the slowdown is broad-based, with consumption as well as investment oriented sectors feeling the pain," said Indranil Pan, chief economist at IDFC First Bank Ltd. in Mumbai. "Continuing poor domestic sentiment along with the lack of any demand uptake globally would ensure that any recovery process would only be gradual."

The Reserve Bank of India has already cut interest rates by 135 basis points this year to the lowest since 2009, with more easing to come. The central bank is expected to look through the recent breach of its 4 per cent medium-term inflation target and deliver another rate cut on December 5.

"The onus is on the government to do the heavy lifting," said Devendra Pant, chief economist of India Ratings and Research, a local unit of Fitch Ratings Ltd.. He expects the government will miss this year's fiscal deficit target of 3.3 per cent of GDP as it boosts spending while tax revenue falters.

The weak growth outlook and interest-rate cuts are weighing on the rupee, the worst performing currency in emerging Asia this quarter.

Finance Minister Nirmala Sitharaman said this week she's not closing the door on additional steps to support the economy. She posted several times about the economy on Twitter on Thursday, saying macroeconomic fundamentals are strong.

There is growing clamor for more tax cuts, this time for individuals and on equities. Indian stocks touched a record high this week as investors pumped in money on speculation of more stimulus measures.

"It's a deep cyclical slowdown that the economy has gone into," Chetan Ahya, chief economist at Morgan Stanley, said in an interview with Bloomberg Television. The economy has been hit by several shocks in recent years -- from the taper tantrum in 2013 to demonetization in 2016 and this year's trade war -- making a strong rebound difficult, he said.

"As the global recovery comes through, India's economy will be on the map finally," he said.