Is Jio Really Profitable? Audit To Answer Doubts And Controversies

Analysts have previously noted some anomalies in Jio's accounting, like the inclusion of six months of revenues in a three-month reporting period. 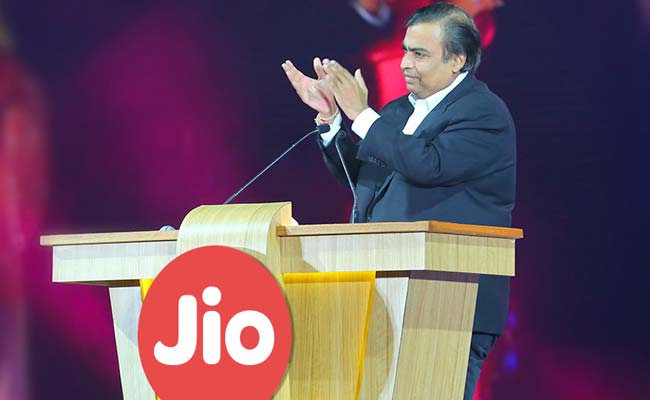 A smartphone in India cost more than $200 just two years ago. Now you can get a decent phone for nothing but a refundable deposit of $23. Data packages are cheap, and a startup company even throws in free voice calls for life. For this, consumers can thank Mukesh Ambani, a 61-year-old petrochemicals titan who is the country's richest man. From his perch overseeing Reliance Industries Ltd., one of India's largest conglomerates, Ambani has plowed more than $38 billion into his wireless entry, Reliance Jio Infocomm Ltd. It's a classic business disruption. Jio has quickly garnered 14 per cent of a market that is expanding rapidly, putting pressure on other mobile phone providers.

Along the way, virtually every promise Ambani made about the company's performance in the marketplace has held up, from inexpensive Jio handsets to state-of-the-art wireless connections.
But one claim merits a closer look: that Jio has been profitable virtually from its commercial launch. And it's a worthwhile exercise, given talk of a possible initial public offering for the unit or even an acquisition.

Unusual Accounting
A review of Jio's unaudited results for the last year shows that the wireless venture and its parent relied on a series of accounting decisions that wound up portraying Jio's financial performance in the best possible light.

Analysts have previously noted some anomalies in Jio's accounting, like the inclusion of six months of revenues in a three-month reporting period.

Another accounting decision reveals even more. Jio took advantage of a rule that allowed it to burn through billions of dollars in expenses during its rollout period without the costs showing up on its income statements.

Jio's auditor, Deloitte Haskins & Sells LLP, an Indian affiliate of Deloitte LLP, is conducting its annual review of Reliance's numbers. Audited results for the year ended March 31 are expected to be disclosed this week, for Jio as well. It will be the first time Deloitte has audited Jio's sales.
Jio will either get Deloitte's blessing or be pushed closer to norms in international financial reporting. A wholesale change is not expected, but any shift in approach could puncture the profitability story that Reliance has been trumpeting in India.

"I'm curious to see if Deloitte pushes back on some of management's aggressive estimates," said James Cox, a professor at Duke University School of Law and an adviser to the US regulator that oversees auditors.

The vast majority of stock analysts who follow the conglomerate consider it a good investment. Reliance's shares, having languished for several years, took off in early 2017 after it said Jio would emerge from its trial period and begin charging for service. The shares have almost doubled since then. 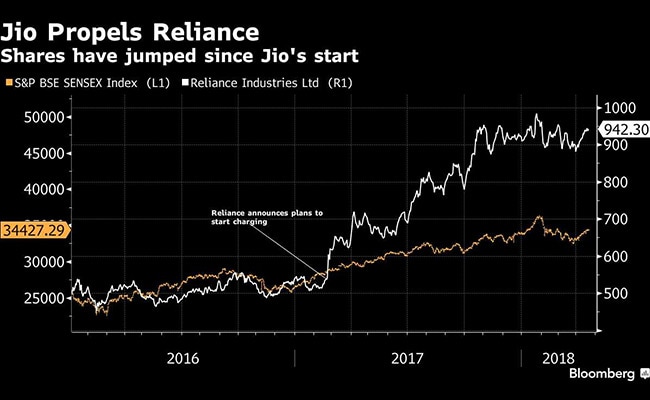 (Reliance's shares have have almost doubled since early 2017.)
"I'm baffled by Jio's numbers," said Sanjiv Bhasin, executive vice president at India Infoline Ltd., a brokerage firm. "They are difficult to believe, but at the end of the day Jio is part of Reliance, which has a very strong balance sheet."

Jayanth Varma, an accounting professor at the Indian Institute of Management Ahmedabad, without referring specifically to Reliance, said that in India, "accounting quirks will pass through" when auditors don't push back. "In US, there is a lot of discipline because the SEC just picks up the annual reports of some companies by rotation every year and pores into them, and asks questions if they see anything unusual," he said.

Jio's Impact
Before Jio came on the scene, India's wireless world was dominated by five carriers, a collection of homegrown firms and Vodafone Group Plc. Unencumbered by legacy 2G and 3G networks, Jio boasted of 4G capability from its launch in September 2016. It offered free data service during its introductory period with a promise of free voice calls for life.

Making service available to the masses has been a personal passion for Ambani, who started another wireless company in 2002 called Reliance Infocomm. He lost control of it, though, after his father's death. When the family concern was divided, Mukesh got the old-world businesses based on oil and petrochemicals, and his younger brother got the wireless venture.

After striking a deal with his brother to get out of a noncompete clause, Mukesh came roaring back. For a second time, he sought to undercut competitors by selling the lowest-price devices and packages, so that most people -- including vegetable vendors and rickshaw pullers -- could have a phone.
"Reliance Jio is the biggest, boldest all-in bet by Mukesh Ambani," Bhasin said.

Big Launch
The splashy debut in late 2016 attracted millions of first-time users and lured some customers from other providers. Jio's entry nipped the profits of the country's three biggest providers -- Bharti Airtel Ltd., Idea Cellular Ltd. and the Indian unit of Vodafone. Each reported a steep decline in average revenue per user during the Jio launch period. By the end of it, Vodafone and Idea had proposed to merge their own operations. Ambani's brother's mobile company became an also-ran.

Meanwhile, by March 2017, Jio had signed more than 100 million users, or roughly 9 per cent of the market.

The company ran though an estimated $1.5 billion in its first seven months, when service was virtually free. Jio classified everything associated with the launch -- salaries, sales and distribution costs, interest payments and more -- as capital expenses. It therefore transferred the spending to the balance sheet as an asset that depreciates over time.

That practice is unusual for a global company, according to accounting experts. Jio says it complies with local rules.

"A company is operational when it begins providing services to customers, even if it's free service," said Parveen Gupta, an accounting professor at Lehigh University. "If you open up an ice cream shop, and give away the product for the first two weeks, you're incurring expenses, even if you're not generating revenue."

When asked about the matter, the Jio spokesman said that expenses can be capitalized until "commercial launch," in accordance with local rules.

Six-Month Quarter
Buoyed by its success in attracting users, Jio announced in February 2017 that it would begin converting to a paid service in April. The effort succeeded, as free subscribers migrated to bargain-basement data packages offering three months of free service in a four-month package. Based on expenses it counted in subsequent quarters, Jio could have lost as much as $1 billion for that quarter, April through June.

But instead of reporting results for that period, management decided to wait a quarter, reasoning that the three months of free service justified a delay, a person familiar with the company said. When it posted for July through September, it effectively packed six months of sales into one quarter while counting only three months of expenses.

The total, more than $1 billion in sales at the exchange rate at the time, impressed analysts. Jio's operating earnings were $220 million. Overall, it had a modest loss of $41 million, and subscriber numbers were growing 12 per cent a quarter.

A few research analysts noted the sales irregularity. Morgan Stanley estimated that 20 per cent of the revenue came from the prior quarter, while ICICI Securities estimated that 13 per cent did.

Analysts from Bank of America Merrill Lynch and HSBC Global Research pointed out that Jio's expenses seemed unusually low. The company was still capitalizing a significant chunk of salaries and other expenses.

Jio's depreciation and amortization costs also surprised. Chris Lane, an analyst at Sanford C. Bernstein, described the rate as "too good to be believed." He calculated that Jio's annualized rate was 2 per cent, a quarter of the rate reported by Bharti Airtel and Idea.

"That's a warning sign," said Charles Mulford, an accounting professor at the Georgia Institute of Technology. "It signals that they'll likely have to write down the assets later on."

At the time of the Bernstein report, Jio said it was depreciating the wireless portion of the business, though it was spending on other future services, like broadband for business.

"Only the wireless assets are currently getting depreciated as they have been put to commercial use," the Jio spokesman said. "Other assets have not yet been capitalized."

The next quarter, Jio turned a profit. For the three months that ended in December, revenue grew by about 12 per cent and subscribers by 15 per cent. Net income was $76 million.

Government Help
Competitors have cried foul about Jio's practices. They have publicly protested several decisions by the Telecom Regulatory Authority of India that benefited Jio, including a rule change that subjected them but not Jio to pricing restrictions. Jio's competitors and the regulator declined to comment.

Rivals were also fined -- fines that they are contesting -- after they limited connections for Jio callers on their networks. They complained that Jio used its testing phase to sign up millions of subscribers with the promise of free calls. Call failures soared for Jio.

The Cellular Operators Association of India issued a statement saying, "For some reason these orders seem to be strengthening the ambitions of one particular operator with deep pockets and monopolistic designs at the expense of other operators."

Promoted
Listen to the latest songs, only on JioSaavn.com
A few stock analysts are beginning to grow wary. UBS has a "sell" rating on Reliance Industries shares, while Jefferies and Macquarie have rated it "underperform." The company's total debt stands at about $25 billion, up more than $10 billion from 2010, before Reliance's spending binge on the wireless venture.

"Ambani has played a gamble," Bhasin, of India Infoline, said, "but he also has a proven track record in executing projects."