LPG Price Today In Rupees Per Cylinder: The LPG price has been increased by a cumulative Rs 284 per cylinder in Delhi so far in six revision since August.

Latest LPG Rates: The LPG rates have been hiked in metros six times since August

Non-subsidised LPG (liquefied petroleum gas) or cooking gas prices were increased from Wednesday, in their steepest hike since January 4, 2014, and the sixth consecutive upwards revision. In Delhi and Mumbai, the raise was to the tune of Rs 144.5 and Rs 145 per cylinder respectively, according to Indian Oil Corporation, which supplies LPG under brand Indane. With effect from February 12, the non-subsidised LPG rates were revised to Rs 858.5 per cylinder in Delhi and Rs 829.5 per cylinder in Mumbai.

LPG Cylinder Price In Metros With Effect From February 12, 2020

Until Tuesday, the prices in the two metros had stood at Rs 714 per cylinder and Rs 684.5 per cylinder respectively, according to Indian Oil's website - iocl.com.

Typically, any changes in LPG rates are effected by suppliers at the beginning of a month. 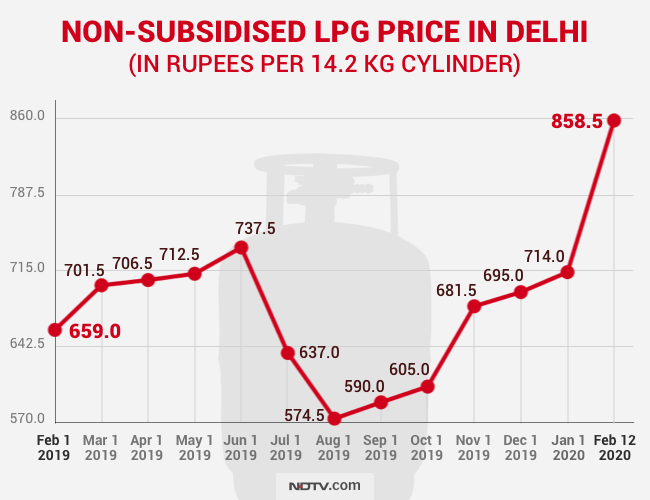 The amount of subsidy provided by the government on the quota of 12 cylinders per year varies from month to month. Factors such as changes in the average international benchmark LPG prices and foreign exchange rates determine the amount of subsidy.