How Jio And Facebook Are Teaming To Find New Indian Users

India already has 480 million internet users -- about 75 percent more than the U.S. and second only to China. One recent afternoon in the Indian city of Pune, a 35-year-old mason named Om Prakash Gaekwad gets a crash course in technology. He watches a street-corner skit explaining the virtues of WhatsApp's messaging service and Reliance Jio's wireless network. He then climbs aboard a truck to find out how to set them up. Half an hour later, he's made up his mind: He'll upgrade to a new phone so he can negotiate masonry rates on WhatsApp -- and let his six-year-old play mobile games.

Such pitches -- part tutorial, part kitsch -- are boosting web adoption in what is already the world's fastest-growing major internet market. Facebook Inc., WhatsApp's parent, and India's richest man, who started Reliance Jio, are teaming up to draw hordes of customers with cheap phones, rock-bottom rates and handy messaging services. Facebook's role in all this is so central that, in rural regions, handsets with Net access are dubbed "WhatsApp phones." 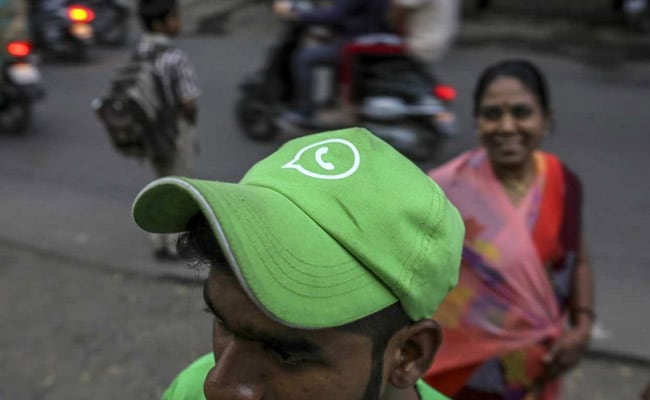 The two companies are building a massive user base that will boost their own fortunes. At the same time, they're creating the foundation on which business like online retail, digital payments and food delivery can be built. Reliance Jio and WhatsApp wouldn't comment directly on future plans, but experts see more collaboration as inevitable.

"It's a natural alliance because it gives WhatsApp access to tens of millions of new customers through Reliance Jio," said Nandan Nilekani, technology investor and co-founder of tech outsourcing giant Infosys Ltd. In turn, Reliance gets a lift because millions of neophytes see WhatsApp as the first step in entering the rest of the Internet.

India already has 480 million internet users -- about 75 percent more than the U.S. and second only to China. That figure is projected to grow to 737 million by 2022, according to Forrester Research Inc. "The next 500 million users are yet to be captured," said Satish Meena, a forecast analyst at Forrester.

Facebook, reeling from crisis after crisis in the U.S., faces challenges in Asia too, such as criticism that it hasn't done enough to combat the spread of violence in Myanmar. In India, its Free Basics, which offers a minimalist web for emerging markets, was banned for violating net neutrality, while WhatsApp has been used to circulate fake videos and rumors that have led to dozens of lynchings. The government has threatened legal action if the company doesn't do more to clean up the problems.

The scandals have Facebook's stock on pace for its worst annual performance since 2012, the year it made its public debut.

Yet India is evolving into perhaps its most promising opportunity. The country is already WhatsApp's biggest market, with more than 200 million users -- so important that Chris Daniels has visited twice since becoming CEO in May. The messaging service is free to use, but Facebook charges businesses to communicate on the platform and is expected to introduce advertising. WhatsApp will become more crucial to Facebook's bottom line as the social network matures.

"A lot of our growth is coming from markets in Asia; our top growth countries were India, Indonesia and the Philippines," David Wehner, chief financial officer, said on the most recent earnings call.

Facebook's recent momentum in India stems from its alliance with Mukesh Ambani, chief of the conglomerate Reliance Industries. In a seismic shake-up of the telecom industry, Ambani invested $35 billion to launch the country's most advanced wireless network two years ago. He offered free voice calls and bargain-basement digital connectivity through inexpensive feature phones across India, appealing to those fazed by smartphones. Millions of impoverished Indians were yanked into the digital age almost overnight. Most of Ambani's rivals -- including his own brother -- were quickly driven into irrelevance.

In just two years, his network has grown to more than 250 million subscribers, more than AT&T Inc. or Verizon Communications Inc. Ambani has aspirations to use this sprawling base to build his digital empire: He's piloting a digital payments bank, moving into television and movies and exhibiting Bezos-like ambitions to dominate all aspects of e-commerce.

The pitch in Pune shows how Facebook and Reliance Jio operate. In the city's teeming Kondhwa Market, a team of traveling performers dressed in green WhatsApp T-shirts reprise their skit throughout the day. It opens with a rowdy game of cricket, then friends share the excitement of taking selfies and creating WhatsApp friends' groups. "Dhoom macha rakhi hai," WhatsApp has created a big stir, said one performer.

There is a dark side, another points out. Forwarded videos can incite fear and hatred, shattering social unity. The performers warn about identifying fake messages, and quitting groups created by strangers. After government criticism, WhatsApp limits forwarding to five people per message.

Then this week, WhatsApp unveiled its first ever, pan India TV campaign,"Share Joy, Not Rumors", in English and nine Indian languages. It's a stepped up effort to address misinformation. The three 60-second films convey real-life scenarios when rumors spread in family and school WhatsApp groups. The film teaches people to use WhatsApp controls such blocking senders, and leaving groups where rumors circulate.

As the skit nears its end, Mitesh Patil stands inside the open truck, ready to field questions from visitors. The chatty 19-year-old is taking a break from college to work as a "WhatsApp ambassador." Aside from queries on how to download WhatsApp, he is asked about the JioPhone's price and whether an old feature phone can be exchanged for new device. He directs them to Reliance stores nearby.

"Many people who can't read and have no idea how an internet-ready phone works, came here asking to buy one and download WhatsApp," says Patil. "An internet-connected mobile phone has become a basic necessity in India."

As the sun sets over Pune, the crew takes their role-playing tutorial across the city to Handewadi Road, a busy warren of streets lined with middle-class homes. Within minutes, a crowd descends on the van. Among them is Sunita Kamble, a beautician who provides doorstep service. She's been on the Jio network for 18 months, watching YouTube videos on body polishing, haircuts and makeup on her battered Oppo phone. "I saved 50,000 rupees by learning via the internet instead of taking a make-up course," says the 37-year-old, with tunic pants, salwar kameez and a traditional bindi dot on her forehead.

Kamble is now ready for a big step: learning English and brushing up her cooking skills on a new JioPhone she intends to buy. "I can message my clients and schedule all my appointments on WhatsApp," she said.

Still, there's a note of caution in the air. Many customers leap from poverty and isolation to a digital age where messages can inflame religious and cast prejudices. That afternoon, the skit ends with a message in Hindi that plays on the word Jio, which means "to live," and urges "respect and honor."