Somebody Should Send Axis Bank's Board a Thank-You Note

Axis Bank Ltd.'s board mustn't feel even the slightest embarrassment for being so wrong for so long. In fact, it deserves a vote of thanks for helping to create possibly the biggest and juiciest takeover target in the history of Indian banking.

Rewind to last July. The Indian lender's board had just rewarded CEO Shikha Sharma with a fourth term -- until June 2021 -- even though she still had almost a year to run on her existing tenure. That was when the bank was busy telling the world that its stinking pile of corporate bad loans was yesterday's news, and that things were so under control management might even consider paring its guidance of 1.75 percent to 2.25 percent in full-year credit costs. 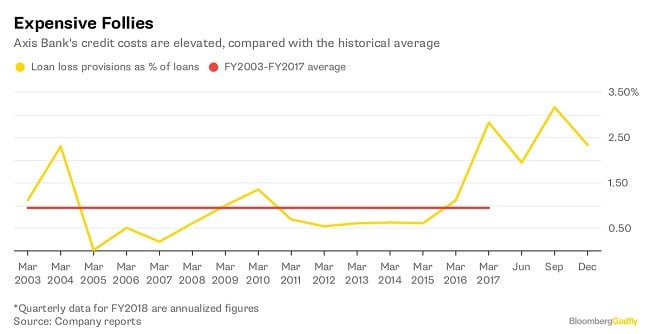 However, by October it was clear the central bank had a very different view of the non-state-owned lender's asset quality.

After the regulator forced it to downgrade nine large corporate accounts to nonperforming from standard assets, Axis closed its books in March with credit expenses as high as 2.82 percent, the most in at least 14 years.

If that slippage wasn't enough to fill the board with buyer's remorse, news this month that the Reserve Bank of India has asked it to reconsider Sharma's reappointment was a plateful of eggs hurled straight at its face. Ultimately, though, Sharma gave the board an out when she said she wanted to leave by June. That sent shares in Axis up 5.2 percent Tuesday.

The board, which should have spent at least the past year looking for new leadership, now wants permission to cling on to Sharma until December; apparently it can't find a replacement by end of May.

Shareholders won't care two hoots if the RBI accepts its plea. As far as they're concerned, it's time to look beyond the current boss, or for that matter, the current board.

The reason Axis trades at a price-to-book ratio of 2.3 times, compared with a multiple of 4 for Kotak Mahindra, is partly because Sharma's push into corporate lending bulked up the balance sheet, but that also weakened it from within. By not acting quickly enough to rectify the situation, the men and women on Axis's board have done their bit.

It would be fairly easy for a new owner to turn Axis around once operational breaches -- like quarterly results getting leaked on WhatsApp message groups -- get fixed.

But for their role in helping to create a reasonably large (total assets of $94 billion), but relatively cheap lender, the current set of directors at least deserve a thank-you note. From Bain, and -- should he succeed in buying it -- Uday Kotak, too.

(This column does not necessarily reflect the opinion of Bloomberg LP and its owners.)

Disclaimer: The opinions expressed within this article are the personal opinions of the author. The facts and opinions appearing in the article do not reflect the views of NDTV and NDTV does not assume any responsibility or liability for the same.
Comments
Axis BankShikha Sharma

Bad Bank Politically Expedient Before 2019 Polls, But A Bad Idea