The country's top six automakers reported a 29 per cent decline in August sales. A 45 per cent slump in commercial vehicle sales by Tata Motors Ltd., the No. 1 Indian truck maker, added to the gloom. With GDP growth facing its longest slump since 2012, India is in a quasi-recession, Teresa John, an economist at Nirmal Bang Equities Pvt. in Mumbai, said in a report this week.

The bond market seems to agree. A five-year swap, which allows investors to lock in a fixed interest rate by promising to pay a floating overnight rate, has dived to its lowest since the 2008-09 global financial crisis. The swap, a proxy for how traders view short-term rates will behave in the future, is signalling expectations of very deep cuts in the policy rate. 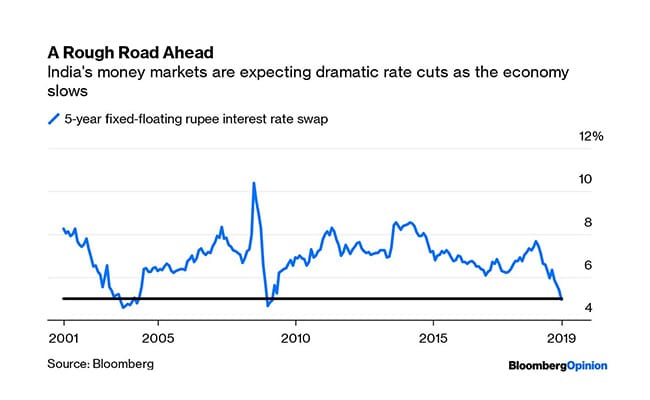 A Rough Road Ahead

While those cuts would push up bond prices, a 5 per cent-plus drop in the rupee so far this year will undercut the dollar value of capital gains for global investors. New money may be dissuaded by low initial yields plus the risk that the rupee could fall more.

A contrast with Indonesia may be helpful. Like its bigger neighboring economy, Indonesia, too, is hungry for capital that would create jobs for its teeming youth population.

But while Indonesian government bonds have attracted $8 billion in foreign money this year, net inflows into Indian debt securities have been $4.5 billion. Indonesia's economy will also slow because of the US-China trade war. Still, Jakarta has the fiscal headroom to follow through on its intention of slashing corporate tax rates by 5 percentage points to 20 per cent. If that's not enough to spur business activity, President Joko Widodo can also channel fresh investment into a brand new capital city.

That brings us to Prime Minister Narendra Modi's pro-growth spending ambitions. A $70 billion plan to build a 35,000-kilometer (22,000-mile) road network is under way. Highways can act as a powerful stimulus by creating new construction jobs, spawning fresh orders for excavators, graders and rollers, and putting spending money in the hands of people whose land is getting acquired.

Trouble is, India doesn't have fiscal resources. Even involving the private sector to share 60 per cent of the cost of new roads - against a guaranteed annuity for 15 years - is getting tricky. After shouldering the burden of the remaining 40 per cent cost, the highway authority's debt has risen to Rs 1.8 lakh crore from Rs 24,000 crore five years ago. The agency has to slow down. Realistically, it can award between 3,100 km and 3,500 km annually over the next four years, according to SBICAP Securities, a big drop from the record 7,400 km of contracts it gave out in the year ended in March 2018. 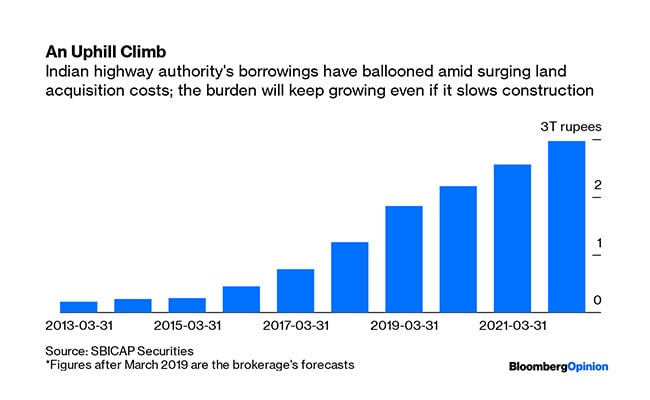 In the absence of more spending in an area with a high fiscal multiplier, deeper interest rate cuts may be needed to arrest plunging GDP growth. That overburdening of monetary policy is something investors will take into account.

More crucially, monetizing existing roads could generate the much-needed upfront funds to build more new ones. But a 3-km stretch sold to investors for 30 years garners resources to build only 1 km of new highways. That's partly because the previous government came up with a law to ensure landowners get 34 million rupees per hectare as compensation, versus just 7 million rupees in 2013. All very noble (and extremely populist), but where's this money going? Why can't PM Modi's all-pervasive Goods and Services Tax pull some of it back for the exchequer to ease the financial constraints on infrastructure?

Investors can keep asking, but a government that has only recently admitted to a widespread slowdown won't accept that its GST is fatally flawed. Some tax cuts for the auto industry may cheer the equity markets. But for bond investors, what matters is not only how much more the private sector can spend out of any tax relief, but also how much less the government will get, and therefore what its borrowing will be.

Let equity markets worry about cars. Bond investors have their eyes on the road.